That's right, I'm back from vacation, and I have a lot of catching up to do. But before I get to that, I want to review some advance copy stuff that Oni sent me. Man, I feel like a real critic or something now... 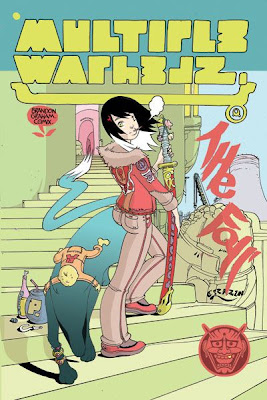 The logo on the cover is spelled "Multiple Warhedz" (or maybe even "Multipl3 Warh3dz"), but Oni's informational materials and website use the title above, so I'm going with that one. Whatever the case, it's another dose of Brandon Graham's crazy sci-fi weirdness, similar to his book King City from Tokyopop (read my review here). This one takes place in another future dystopia, 50 years after WolfWar 3, in which werewolves were sent into space to fight aliens (now their ships are returning and crashing to earth regularly). Our stars are Sexica, a hot organ smuggler, and Nikoli, a werewolf who gained his powers in an unusual way (the title is a hint). The world is a nuclear wasteland, and they're struggling to get by in what appears to be a Russian metropolis populated by mutants, aliens, and other weirdos. In future issues, it seems they will be hitting the road and driving across the wasteland in their car that Nikoli built from old robot parts and a sentient engine, but this issue mostly concerns itself with establishing the setting and characters.

And it does a great job on both fronts, with detail-packed vistas of bomb-riddled statues and crazy urban vistas: 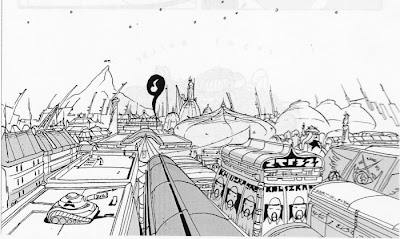 The character work is also excellent, introducing the couple as cute lovers, with a fairly explicit sex scene:

Yowza! We also get a cool dream sequence of Nikoli's, in which a child rides around on a wolf's back, having adventures: 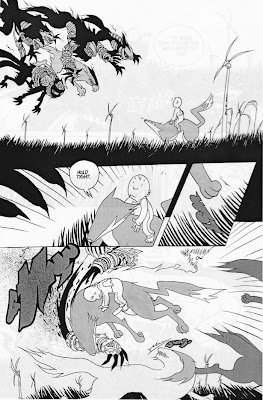 I love the "Ow" in the monster's mouth. It's a pretty surreal scene, and while his dreams might or might not factor into the story in the future, I thought it was pretty sweet.

So it's another good example of Graham's worldbuilding, with details like depressing street signs that warn their viewers not to expect too much out of life, or descriptions of the super-organs that Sexica is smuggling (L-bow, a dart-launching elbow, and dick-tation, a penis that writes, are just two examples). It's super-cool, and I can't wait to read more. This issues comes out on July 25, and it's a quarterly series, 48 pages for $5.99. Watch for it!

I got lots more to talk about, but we'll see when I have a chance to get to it.
Posted by Unknown at 11:06 PM