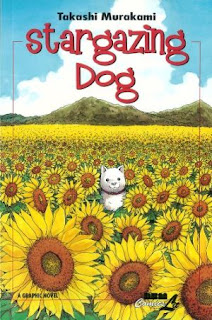 You know a book is going to end up sad when the opening scene is some cops discovering an abandoned car containing a year-old corpse along with a dead dog at its feet. The following scene, which flashes back to a family adopting a puppy, is kind of soured when we've gotten a glimpse of the fun times ahead. But that's sort of the message here: that life is short, and we've got to make the most of our relationships while we can. The book is narrated by the dog, who acquires the name Happie, as he observes without understanding as the family falls apart, the daughter becoming a wayward youth and the father and mother divorcing after he loses his job. But Happie and "Daddy" form a bond early, the paterfamilias being the one who usually takes him for walks in which he can open up to the canine (while still maintaining a gruff exterior, refusing to sacrifice his masculinity) more than he can with any humans. Eventually, he is left with only the possessions he can fit in his car, and the odd pair decide to take a trip back to the man's hometown, a trip that, as we've seen, doesn't exactly turn out well. It's kind of a dark tale, but it's got a bittersweet undercurrent that comes from the dog's total devotion to his master, a simple love and companionship that provides a bit of light and joy even in the worst times.

This is a nice slice of human/canine drama, one that follows certain Japanese rhythms, similar to some of Takeshi Kitano's less violent movies, not exactly heartwarming, but satisfying in its simple presentation of a compellingly realistic story. After the pair's inescapable end, there's an epilogue chapter that sees a social worker try to identify the remains, a task that causes him to flash back on his own life and travails with pet ownership, and kind of sum up the whole book, or at least bring it to a nice end that incorporates the sunflower-filled imagery of the cover. It's really nice to see a book like this get release on American shores, aspiring to neither high artistic statements or in-your-face excitement, but still lodging itself firmly in the heart.
----- 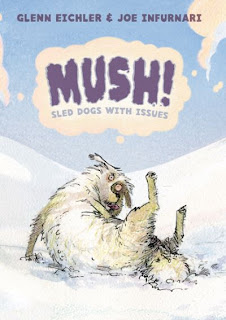 This book takes a different approach to canine relationships, an interesting fusion of seeming realism (at least in terms of the way dogs function as a group that works and lives together) with and anthropomorphism that imbues personality and dialogue on inhuman creatures. Following a group of six sled dogs and their owners who live somewhere in the barren north (Canada? Alaska? Somewhere up there), the book sees them all deal with struggles both personal and inter-personal, bouncing off each other as they struggle for dominance, affection, or to continue their genetic line, while remaining oblivious of the human drama going on in the cabin they live alongside of. Dolly, who has been assigned the lead position when pulling the sled, worries that she's not worthy of such an important role. Venus, the other female, is tired of being bred with one of the males each year to produce puppies. Buddy, having been paired off with Venus in the past, thinks he has some sort of special relationship with her. Winston wants to breed with one of the females in order to keep his purebred genes going. Guy is plotting to take over the lead position from Dolly. And Fiddler is going through a sort of existential crisis, feeling that there is nothing worth living for. It's not exactly realistic, what with the ascribing of human emotion to the dogs, but the way the expressive art and dialogue captures the emotions and interactions makes the non-human concerns very relatable and interesting, with everything building to a pretty exciting climax that brings each character arc to a satisfying end, making for a really nice ensemble drama that just happens to star a bunch of dogs.

On the art side, Joe Infurnari makes some...interesting choices, giving some of the dogs bulbous noses or short snouts that don't seem to fit the stereotypical look of sled dogs. He also often depicts their faces with an almost Picasso-like quality, drawing eyes at different sizes and collapsing noses in a sideways manner that is somewhat offputting. But while it's not what I would consider to be the most appealing way of drawing the characters, it works really well as a way of differentiating the dogs from each other and giving them an expressiveness that really sells their emotional conflicts, with the odd unrealism emphasizing that while we understand their words, these are definitely inhuman characters. And the settings in which all this transpires are lovely, giving Infurnari a chance to use his scratchy linework to depict windswept snow and dense forests that race by as the sled is energetically dragged down its lovely paths. It's a pretty damn good looking book in the end, and once you get used to the way the dogs are drawn, it's compelling reading, a well-written character piece that takes a unique perspective and makes it work. Good reading, as long as you don't get frostbite.
Posted by Unknown at 9:34 PM