Jerusalem: When can I make a pilgrimage to this new holy land? 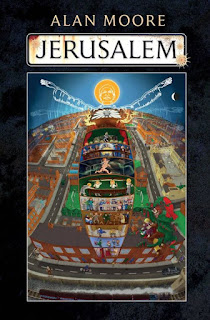 Alan Moore is a weird dude, but he's been writing compelling, fascinating stuff for decades now. Most of his body of work has been comics, but his first novel (or was it a collection of interlinked short stories?), Voice of the Fire, was pretty successful, so he apparently decided to go for broke and pour as many ideas as possible into his next work, and Jerusalem is the result, a 1,200-page doorstop of a book that is in turns mindbending, frustrating, and exciting in its sprawl of concepts and styles.

Like Voice of the Fire before it, Jerusalem centers on Moore's hometown of Northampton, England (specifically the working-class neighborhood known as The Boroughs), which he posits as centrally important in the history of Britain, a wellspring for much of Western culture, but a neglected and downtrodden place that is constantly being shat upon and systematically destroyed, possibly leading to the eventual downfall of civilization.

That's a pretty big idea to take in, but it's only one of the crazy concepts that Moore explicates here. While the story jumps around in time, with segments ranging from over 1,000 years ago all the way to the end of the universe (and also beyond time itself into higher dimensions), the story centers around a family native to the area, the Vernalls, and their fitful awakening to the role they play in the relationship between "our world" and the higher realms of the afterlife and the ghosts and spirits that inhabit it. It's an interesting multi-generational story, with everything leading to a climax of a sort, although now that I've finished, I'm still pondering exactly what to make of it all.

The journey from the beginning of the book to the end is definitely worth taking though. It starts with a prologue about Alma and Michael Warren, a brother and sister who grew up in the Boroughs in the 1950s and 60s. The defining incident around which much of the book is built has to do with a day in 1959 in which Michael, at three years old, choked on a cough drop and spent nearly ten minutes in which he was basically dead before being miraculously revived, with no memory of what happened during that time. But nearly 50 years later, in 2006, he has an accident and the memory of those 10 minutes comes flooding back, and it's so crazy that he thinks he might be going insane. He tells the story to his sister, who grew up to be a somewhat famous artist, and she decides to create an exhibition of works about his experiences, one that she says will make everything right that has gone wrong in their dying neighborhood.

But, having defined these two events that are of fundamental import to the story (Michael's near-death experience and Alma's exhibition), Moore proceeds to make us wait before he gets to them. Jerusalem is divided into three "books", and the first one skips around all over the place, focusing mostly (but definitely not exclusively) on members of Alma and Michael's family from earlier generations and their propensity for what seems like madness but turns out to be a knowledge of higher dimensions. This exhibits itself in different ways and to different effects, but it probably comes across most strikingly in a chapter told from the viewpoint of their great-grandfather Snowy Vernall, whose fourth-dimensional experience of his life means that he knows everything that will happen beforehand and simply follows predefined steps with his every action. Fascinatingly, Moore turns this into a beautiful examination of how this type of life would be experienced, describing how he still feels all of his emotions and lives every moment, even though he knows what's coming, and it ends up being a beautiful look at human life as lived without the illusion of free will.

There's plenty of other excellent drama and ideas in this first third of the book, with the perspective shifting in every chapter and jumping around in time to follow not only other members of the Vernall/Warren clan, but other characters as well, including a modern-day Boroughs prostitute, a former slave who emigrated from the United States, a medieval monk who hauled a stone cross from Jerusalem to mark Northampton as the center of England, and a ghost who roams the Boroughs living a strange sort of purgatorial existence.

That last one is one of the more interesting chapters, since it offers a hint at the weird cosmology that Moore has devised here, in which the departed can roam their former haunts and tunnel backward and forward in time, gaining sustenance from a sort of extradimensional fungus that looks like a bunch of conjoined fairies (you can see a depiction of these "Puck's Hats" right next to the title on the book's cover art, which was drawn by Moore). And when Moore finally comes back around to what happened during young Michael's near-death experience, you understand that he has been laying the groundwork for Book Two, which functions as an extended trip through the afterlife, a higher dimension known as Mansoul.

Book Two functions as one of the travelogues that Moore is famous for (think of William Gull's tour of London in From Hell, or, perhaps more analogous to this book, Promethea's journey through the Immateria), with Michael taking a premature trip through the afterlife, which sort of sits "above" our world and functions as a place where the dead can congregate, interact with angelic "Builders", and journey to any moment in history to witness what took place. This leads to plenty of adventures, many of which occur after Michael joins up with a group of apparent children (we learn that the dead tend to take the form at which they were happiest during their life) called the Dead Dead Gang, and they take him exploring through various moments in history, interesting areas of Mansoul, and sights that he needs to see to be able to later relate them to Alma so she can turn them into her art exhibition.

This second third of the book is probably where it works best, since it functions as a rollicking adventure through time and space, shifting perspectives each chapter so that we not only experience Mansoul through Michael's eyes, but also check in with each member of the Dead Dead Gang and learn about their lives and what led them to take part in these momentous events. There's an exciting scene in which they watch a fight between two Builders who come to blows over Michael's fate, an encounter with a demon whose nefarious schemes may or may not all be part of the grand plan, moments of profound sadness and joy, and a grand finale that's a fitting send-off to the kid before he rejoins his natural lifespan.

Following that tour de force exploration of the workings of the crazy afterlife that Moore has come up with, the last third of the book can't help but feel somewhat less satisfying, with much of it seeming like it's killing time before we can finally get to Alma's big exhibition and the culmination of all the book's plots. But there are still some fascinating ideas and continuing exploration of this world, including a trip to the end of the universe, a look at the world's monetary system (another thing that Moore claims has its origins in Northampton), and the payoff to some plots that had been simmering throughout the entire story.

Book Three also gives Moore a chance to experiment and push the limits of his format, sometimes in ways that test readers' patience. This is especially true in a chapter about James Joyce's daughter Lucia, who spent several decades in a Northampton mental hospital. Moore writes the chapter in what seems to be a pastiche of Joyce's style (I haven't actually read any Joyce, so I can't say how effective of an imitation it is), and it's a chore to get through. Everything is written phonetically and with lots of misspellings, rearranged words, and malapropisms, and reading it kind of drove me crazy, since it required constant decoding to determine what it was saying. I did get the hang of it after a while, but I was certainly glad when it was over, even though the content of the chapter lurking under the stylistic presentation was really interesting, with Lucia's fractured mental state allowing her to traverse multiple time periods and interact with lots of fantastical people and creatures.

Moore also throws in a few other semi-experimental bits, including a chapter that's presented as a sort of stage play (with Samuel Beckett, Thomas Becket, John Bunyan, and John Clare as characters), another that takes a stream-of-consciousness journey through one peripheral character's evening, and a third that takes the form of a poem (with an ABCCBA rhyme scheme that seems to reflect the book's structure itself). It's all rather playful, and by the time the book is over, it makes for a kaleidoscopic range of stories and ideas.

I'm still processing what exactly Moore is trying to say with all of this, but one thing I'm thinking is that Alma Warren is sort of a stand in for Moore himself (her name even sort of functions as a verbal anagram of Alan Moore), and this book is his version of her art exhibition, with the purpose of capturing the history and character of his beloved hometown and preserving its importance even as it (and, by extension, the rest of the world) decays into ruin.

But the book is really about so much more than just the importance of Northampton. It's full of fascinating ideas, and its extreme length lets Moore take side trips into whatever seems interesting, including Oliver Cromwell's psychological makeup; the struggle to come to terms with the fact that John Newton, writer of the song Amazing Grace, was also a slave trader; and even a look at cartoonist Ogden Whitney and his creation Herbie Popnecker. The book contains multitudes, and I'm sure it's full of additional secrets and symbols that I didn't catch. It's a pretty incredible experience, one that's like nothing else I've read, even among Moore's extensive, challenging body of work. It definitely requires an investment in time and mental energy, but it's totally worth it.
Posted by Unknown at 5:41 PM 2 comments: