Eddie Campbell and I are totally pals now

Tonight, I attended an appearance by comics artist extraordinaire at Quimby's Bookstore in Chicago (a cool independent bookstore where, if I had the money, I could drop a small fortune on all the small-press, indie comics that don't show up at my local comic shop). Campbell was promoting his recently released book The Amazing Remarkable Monsieur Leotard, and it was a fun little evening, with a small audience for him to discuss his works, take some questions, and sign various books. He's an immensely enjoyable speaker, talking with a charming Scottish accent and prone to plenty of tangents and digressions that never cease to be entertaining.

Monsieur Leotard certainly looks like an enjoyable story, and Campbell shared its genesis in a conversation between (he thinks; he can't remember the specific source) Will Eisner and Michael Chabon, in which one of them speculated that all superheroes could be traced back to the circus. As Campbell said, this doesn't seem right until you think about it. Take, for instance, the Fantastic Four: you've got the India rubber man, the strongman, the fire-breather, and the magician's assistant who appears to disappear. There are also parallels in characters like the Beast (patterned after animals like bears and lions) or the Golden Age trend of midget sidekicks like Woozy Winks, Ebony White, and Doiby Dickles.

All this talk about circuses led Campbell to formulate an adventure story centered in the circus along with his friend Dan Best. They found out about the real-life Jules Leotard, the inspiration for the song "The Daring Young Man on the Flying Trapeze" and the inventor of the skin-tight garment which was named after him. Unfortunately, Leotard died young, at the age of 28, too early for Campbell and Best's plans for a character that would "Forrest Gump" his way through history, getting involved in events like the Jack the Ripper murders (watch for an Inspector Abberline cameo appearance in the book) and the theft of the Mona Lisa. So they invented a nephew for him who would attempt to take up his mantle, performing in disguise while wearing a fake moustache. It sounds like a great read; I can't wait to plow my way into it.

Campbell spoke about many of his other works, including a long talk about The Fate of the Artist. In a lengthy, incredibly amusing story, he talked about how his propensity for using the likeness of his designer, Mick Evans, and then killing the characters based on him, led him to name Evans as Campbell's murderer in the book. Campbell originally intended to leave the mystery of "his" disappearance in the book unanswered, since it was obviously a joke anyway, but the editor insisted on him solving the mystery, saying that he had to "follow the rules" and deliver a payoff. So Campbell figured he would allow Evans to get him back for murdering him so many times. It's a funny story, but for the final punchline about Evans' revenge on Campbell, you'll have to attend an appearance and hear Campbell tell it. That's personal-appearance-exclusive content, at least until somebody spills the beans about it elsewhere.

Campbell also talked about working with Alan Moore (the two questions he gets most often when meeting fans are "where do you get your ideas?" and "just how mad is Alan Moore?"), stating that in his opinion, Moore's best work is The Birth Caul. After Campbell heard Moore's performance of the spoken-word piece, he asked to do a comics version of it, and Moore wasn't sure at first, because he thought it wasn't possible to adapt. Campbell envisioned something like Dave McKean's more complex work, and he did a few pages as an example, after which Moore agreed. Unfortunately, Moore didn't save the original text, to Campbell had to listen to the recording and transcribe it, which led to at least one instance of wondering what the hell Moore meant when he misread his own writing. Campbell also talked about how much fun he had creating some of the imagery, like an image of a boy wearing striped pajamas that he made by obtaining some actual pajamas, cutting them up, and assembling them in the shape of the outfit on the page: 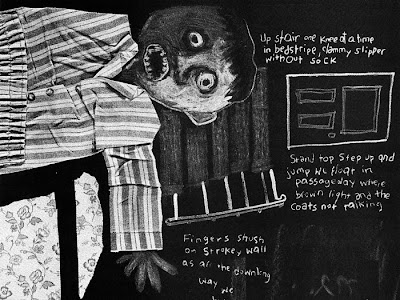 Or a page depicting a broken clock, for which he bought an antique clock and smashed it with a hammer, removing the spring and spray-painting around it to create a cool, shadowy image: 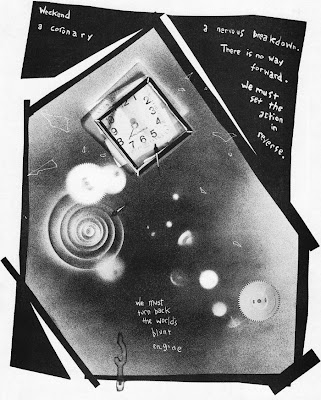 Campbell also spoke about the forthcoming Alec (Life-Size Omnibus), which will be published by Top Shelf in 2009. It will collect all the extant Alec books in chronological order, along with other hard-to-find and previously-unpublished stories, and a new 35-page story which Campbell says is his best work in years. I've actually only read a small portion of the Alec books, so I can't wait to be able to read the entire saga.

There were plenty of other stories told, but that covers the most interesting bits. Campbell also signed books for everybody, and I took a picture with him: Flatteringly, he remembered linking to me about a year ago, and we talked blogging a bit. We also chatted about his habit of referring to his wife as "the wife of my bosom" in his blog writing, a cute (my word, not his) pet name from Victorian times that he read and decided to use, since it was a nice term that didn't sound stupid. I like how he pronounces "bosom" as "boozum".

So, it was a nice evening, revealing Campbell as a nice, friendly guy who is also incredibly talented. He should go a long way in this business.
Posted by Unknown at 9:38 PM