Tonight, I attended the release party for Anders Nilsen's collected edition of Big Questions, which is just being released by Drawn & Quarterly. Taking place at Chicago's Lula Cafe, it was a really fun event, not limited just to Nilsen signing books, but featuring readings, a Q&A, and some surprising added value from some of Nilsen's artist friends. Dozens of pages of original art from the book lined the walls, providing a close-up view of the work that went into the 12-years-in-the-making, 658-page book. 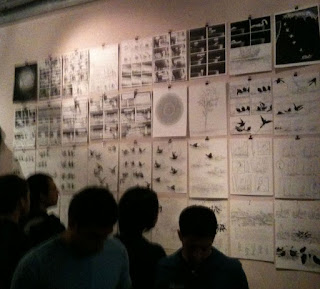 The event portion of the evening kicked off with a reading of a story by Kyle Beachy, who Nilsen described as his first intern, and whose new book The Slide features a cover illustration by Nilsen. His story was a really affecting piece about a man imagining the reason his father did something horrible in his youth, in a nice David Foster Wallace-influenced style. I'll have to look into more of Beachy's work. 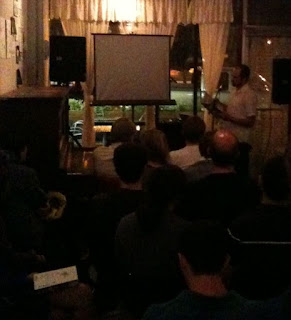 Beachy was followed by a pair of readings by Zak Sally and John Porcellino, who chose to read from each other's comics, claiming to attempt to make fun of each other. Interestingly, Sally's reading of a section of Porcellino's King-Cat Comics was kind of flat, mostly consisting of verbally sounding out the sound effects and trying to describe the images (with Porcellino occasionally attempting to act out parts of the scenes), with any fun-making toward Porcellino already present in the story, which was about him working so hard on his comics that he didn't do any laundry, eventually wearing pajama pants and knock-off Crocs, his car breaking down on the side of the road, and him later lining his hole-filled shoes with newspaper. But then, when Porcellino read from Sally's Sammy the Mouse, he brought the house down with his hilarious rendition of the dialogue, doing different voices for the characters and making funny faces and gestures. Who would have expected Porcellino to be the better entertainer of the two? 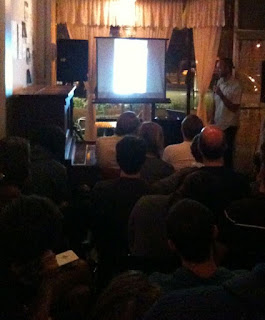 And then it was time for the man of the hour. Nilsen did a slide show along with his reading, showing a large number of images from the book (and some of his other works), giving a mini-history of his career, and reading a few short sections of the comics themselves. It was really interesting stuff, with Nilsen describing how he ended up falling into comics after his art school professors, coming from more of an abstract expressionist school, frowned upon his attempts at narrative in his art. His first real attempts at comics were in pamphlets for a short-lived band in which he performed as the singer, and later a picture book he made for his younger sister about a turtle trying to make a cross-country trip to his little sister's birthday.

After art school, Nilsen moved to San Francisco and was mostly doing installation art, but he also had some sketchbooks, many of which quickly filled up with drawings of birds eating seeds and talking to each other, making for short comics leading to quirky punchlines. Later, he moved to Minneapolis to attend grad school at the Art Institute of Chicago, and he decided to make a minicomic of his bird cartoons, which became the first issue of Big Questions. He didn't seem to think it would lead to anything, but some people reacted well and found it rather funny, including a coworker and an employee of Minneapolis's Big Brain Comics. This reception led Nilsen to do a second issue, which sold well at conventions like SPX, encouraging him to keep going. 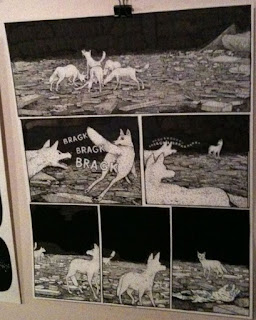 The second issue is notable in that the cover features some inset panels of a bird flying, which was the first "strip" without a punchline, making it the point at which Nilsen decided to weave more of a longer story around these conversational comics. He started to add human characters, such as an old woman who scattered the seeds the birds were eating, and an "idiot" who was inspired by an Edna St. Vincent Millay poem which described spring as "and idiot scattering flowers". 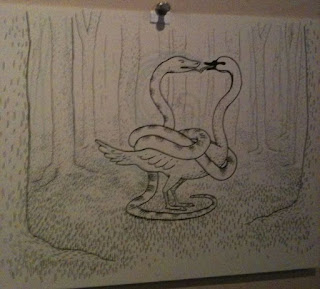 The cover of the third issue was also the first one in color, and it sparked an interest in design, which, due to art school prejudices, Nilsen had previously considered to be a sort of ugly step child to "real" art. He began experimenting with ways to present ideas coherently, marking a big leap forward in storytelling. He started figuring out how to string the strips together into a longer story, such as a bomb falling but not exploding, leading to birds deciding it is a large egg which they need to help hatch, or a bird being dragged underground, an unfamiliar situation for a creature of the air. Unfortunately, this turned out to be very inefficient storytelling, with the big images forming plot points that turned out to take years to resolve. For instance, Nilsen was worried that people would consider the plane crash that takes place in the story as a commentary on September 11, but since the issue where the crash happened didn't come out until 2005, nobody said anything. 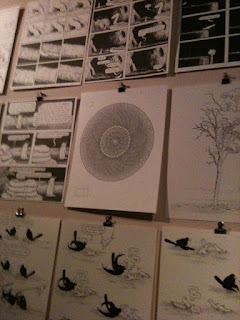 Nilsen went on to read some portions of the story and discuss other aspects of his work, such as his interest in "old-timey" illustration, and answered questions from the audience. A comment on cliffhangers led him to mention how much he liked Tintin, which he noted ends literally every page on a cliffhanger, which is a great way to build tension. From a question about how he learned storytelling, he revealed that he basically taught it to himself through making the series, remarking that self-publishing lets you pretend nobody is actually paying any attention to what you are doing, so you can figure things out as you go.
When asked about his influences, Nilsen blanked, but he was able to come up with several names, including Tintin creator Herge; Chester Brown (especially his earlier work in Yummy Fur); Porcellino, Sally, and audience members Paul Hornschemeier and Jeffrey Brown; Sammy Harkham; and Linda Barry. He also draws influence from non-comics sources like music and film, and always tries to pay attention to other subjects, like history and philosophy. Another audience member noted an Edward Gorey similarity, and Nilsen agreed wholeheartedly, noting the artist's facility with cross-hatching, weird, dark stories, sense of sexuality, and ability to blend the funny and the devastating to make his stories work on multiple levels.
One person asked whether he had done any study of birds, or based his bird characters on any actual bird behavior, but Nilsen stated that he had little interest in birds, and if anything, the crows in the story were influenced by the similar characters in the movie Dumbo. However, after he started the series, he began to notice birds more, and started paying more attention to them. He remarked that Chicago's Humboldt Park is a great place to bird-watch, recalling a time that he saw a heron catch a fish and then play with it, letting it drop repeatedly out of its mouth and catch it before it entered the water. He encouraged everyone to become bird watchers as well. 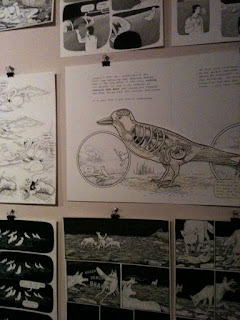 That marked the end of the questions, leaving plenty of time to browse, socialize, buy material from the table that Quimby's Books had set up, and request signatures from Nilsen. It ended up being an excellent evening, fun and funny, informative and fascinating. Myself, I haven't read Big Questions yet (my copy is in the mail), but after this, I can't wait to do so.
Posted by Unknown at 12:33 AM