One thing Eisner was great at was innovative page layouts. He was as good as anyone with the standard panel lineup, usually going for a 2x2 or 3x3 format, with some variations. But where he really shone (in my opinion) was when he broke with the standard format and let the panels bleed into each other, or flow together in fascinating ways. I've scanned a bunch of pages from The 'Contract With God' Trilogy (sorry about the poor quality of some of the images; it's a thick hardcover book that's somewhat difficult to scan), and I'll comment on how I love what he does with them layout-wise. If you missed it, see my previous post about the book to get a background of the plot(s) and characters. Off we go! (click to enlarge images, of course). 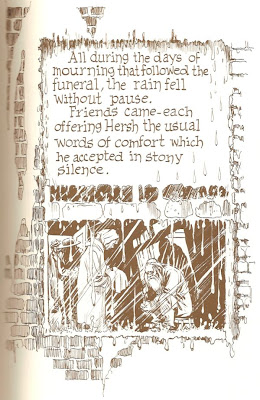 These first two images are from A Contract With God, which doesn't seem (to me) to have as many innovative page layouts, as it was focused more on groundbreaking storytelling. The character design and art are still beautiful, but I'll get to that in another post. I did want to point out a few panels, however. The one above is near the beginning of the story, and although it's only one panel, I love the way it's presented, as if we are looking in through the window, spying on the characters. It's a motif that Eisner will use again in this series, and probably elsewhere. 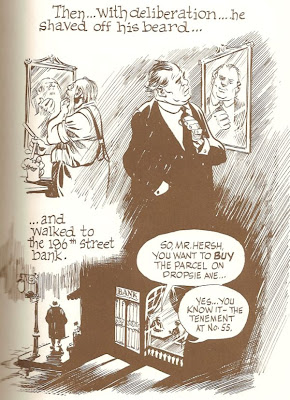 Here's the other page from Contract. I love the shadows. If you want to look at it symbolically, the character's life, and his very soul, have darkened, and we can see the shadows spreading from his figure down to take over his world, as he goes to the bank to turn to a life centered on money rather than God. It works sequentially as well, as we see him approaching the bank from outside before we see him talking to the banker inside. 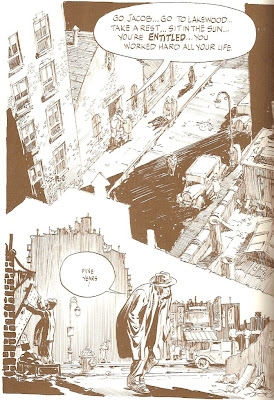 Now we get into A Life Force, and the above panel is probably the one that inspired me to do this post. You've got two panels on the page, but they're separated by a line demarcating the edge of the building the viewer of the scene in the upper panel would be standing on. In fact, it's the same building that's in the background of the lower panel. This really adds to the voyeuristic sense of the whole series, drawing us into the story without us even realizing it. 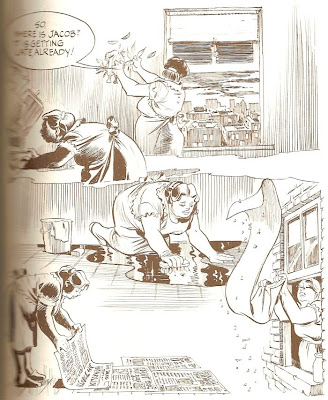 This scene of a woman cleaning her house could be simple, but Eisner layers the panels atop each other, separating them with steam, shadows, and the edge of a blanket. I love the way he uses steam, smoke, or even the comic representation of a "scent" to break up panels. We'll see it again. 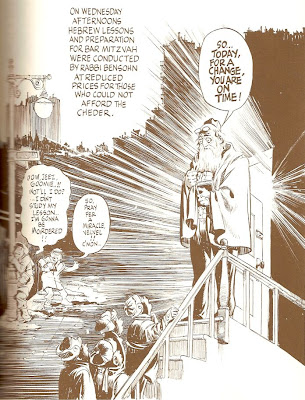 This shot of kids approaching a rabbi's apartment gives us their view of him. His "holy" nature (as he appears to them) is emphasised by the rays of light coming out of the doorway behind him. And I love the way they spread out to fill the silhouette of buildings in the background, causing the panels to bleed together, and showing how the rabbi's influence is felt in the kids' lives. 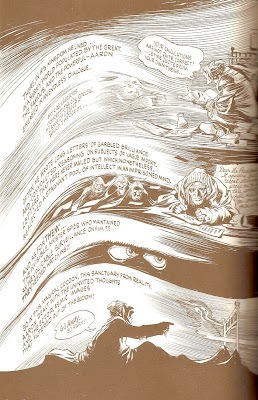 This character is mentally ill, and Eisner distorts both the panels and the text describing him to represent his skewed view of the world. It's distressing, and puts us in his head in a disconcerting manner. I especially like the eyes that seem to be staring at him from between the "panels", in the very background of his world. 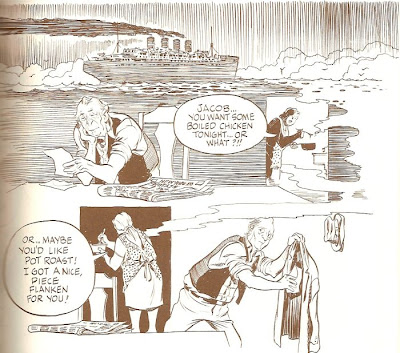 I cut off the bottom of this page since the relevant part is at the top. This character (named Jacob) is paying for an old lover of his to immigrate from Germany (it's the 30's, and she's Jewish). By placing the ship at the top of the panel, in the location a thought balloon would normally go, Eisner shows us what is on his mind. Plus, we get a nifty transition as part of the ocean becomes the steam from his wife's cooking, which also draws your eye from the upper right corner to the lower left as we follow the steam trail, getting a view of Jacob sneaking out of the house. 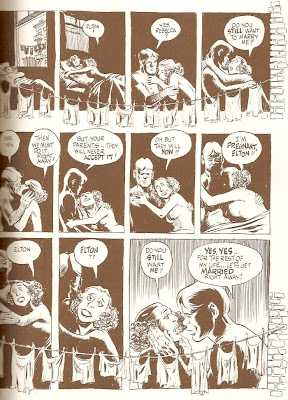 Note: The image above is somewhat NSFW when enlarged. It's a scene between two lovers, but we get the voyeuristic feeling again, as Eisner transforms a typical panel layout into windows by placing bricks on the borders and clothes lines stretched across the foreground. 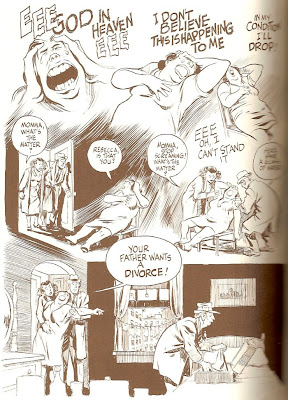 At the top of the above page, we see a woman freaking out about her husband leaving her. The large text and her contorted body gives us a feeling of what she (or anyone listening to her) is going through. The shadows make a nice panel border, but I especially like the border between the bottom panels, as the square of light from the open doorway also acts as the ceiling of the room in the bottom panel. I don't know about anyone else, but I have to be watching for this kind of thing. I imagine it's more difficult to lay a page out like this than it looks, but Eisner makes it seem so effortless that we almost don't even notice.

These next two panels represent what's arguably the climax of A Life Force, so I made the thumbnails smaller to try to avoid spoilers. But I'll probably mention plot details, so if you haven't read the book and don't want it given away (if it matters to you), skip the next two paragraphs.

Here we see the imbecilic Max follow a gangster into a lumberyard (a key location in the story), where he discovers Angelo's prostrate body, carrying him to safety. To tell the truth, the layout isn't especially innovative here, but I love the shot of Max carrying him with the huge plume of smoke behind him. And it's another example of the use of smoke as a panel border, which I like.

This page is a bit more interesting layout-wise, as we get the now-familiar smoke as panel borders, which serves to emphasize Angelo's confusion as he wakes up to see his lumber yard on fire. Nicely done. Oh, and I should mention that I love Eisner's depiction of thought balloons as clouds floating over the character's head. 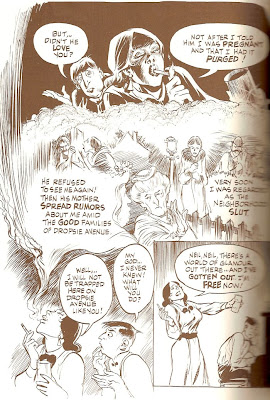 Now we get into Dropsie Avenue. Eisner had matured and grown even more experimental by this point (well, judging from this trilogy, anyway), and while his art might be slightly rougher, his storytelling was at the top of its form. The above page is a beaut, using the motif of smoke as panel borders once again, but it's done beautifully as a flashback is contained in one of Eisner's cloud-like thought balloons, which is revealed to be a puff of smoke that the girl is exhaling. 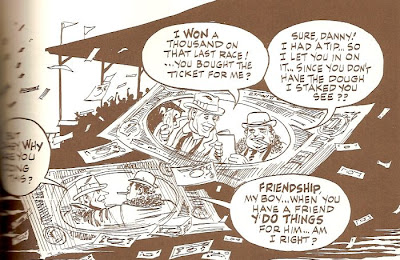 This scene depicts the bribery of a public official, which Eisner makes explicit by positioning the characters inside dollar bills. Not exactly subtle, but it definitely works. 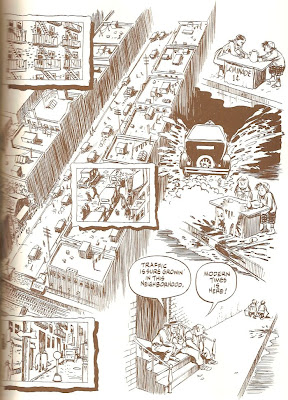 We see the passage of time on this page, with a bird's-eye view of Dropsie Avenue itself, photograph insets showing details of advancement, and a little strip depicting the woes of modern life for kids who play in the street. It's a great combination of elements. 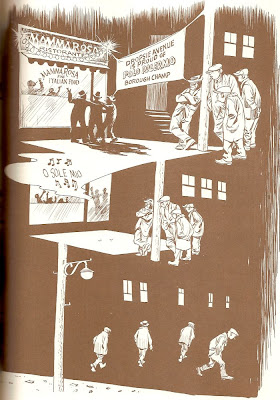 Here's a masterful depiction of one ethnic group supplanting another, as we see Irish youths watching from outside as Italians celebrate in a newly-built restaurant. I like the way the word ballon of the Italians singing bleeds into the square of light from the window. I also note the way the upper "border" of the page indicates light, but the page gets progressively more closed off and darker toward the bottom, showing the way the Irish are being shut out of the neighborhood. 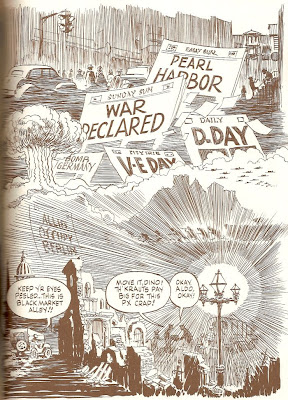 Here we see the onset of World War II, shown all in one panel as a series of newspaper headlines. They read chronologically in a vertical order, forcing your eyes to zigzag back and forth to read them correctly, with the bottom row pointing toward the mushroom cloud signaling the end of the war. We also get a glimpse of the war underneath the "D-Day" headline, with the rough silhouette's of soldiers, a tank, and planes. These are also all moving to the left, drawing your eye to the explosion and the war's completion. Then you move straight down to the "Allies Occupy Berlin" headline, and the background of a short scene that takes place in Berlin. It's a great way to use background details to get the reader caught up while setting the scene for the next few pages. 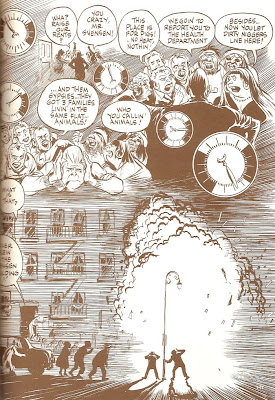 And here's the final page I'll show today. It kind of makes me laugh, since it reminds me of the Black Canary issue of All-Star Batman and Robin. Readers of that book should know what I'm talking about. Here we see a bunch of tenants harassing the building owner/super about the condition of the building. We learned just before this that the building's boiler is malfunctioning and needs to be fixed. We see the literal and metaphorical pressure build up until it explodes, destroying the building. Nicely done.
-----

These are just a few of the examples of Eisner's great ability to lay out a page, focusing mostly on ones I liked and thought were innovative. One could make a study of any of Eisner's pages (hell, somebody probably has), as even the traditionally-laid out ones demonstrate masterful storytelling. He was an amazing artist, and this is just one facet of his talent. Keep checking back, as I'll return tomorrow to discuss another element of his amazing work.
Posted by Unknown at 11:05 PM