Love and Rockets: Can I request more "movies"?

Love and Rockets: New Stories #7
By Jaime and Gilbert Hernandez
Published by Fantagraphics 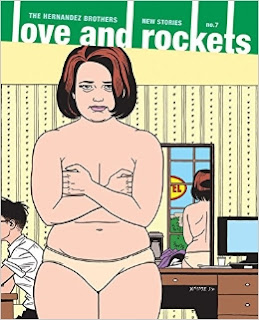 This latest volume of the Hernandez Brothers' always-ongoing series sees an interesting confluence of interests, in that it sees both brothers present comics versions of B-movies that exist within the world of their stories. This isn't anything new for Gilbert, who has been alternating between the ongoing adventures of his long-running characters and the weird movies they make for years, but it's interesting to see Jaime take the same tack. And while he's not new to sci-fi/superhero stories, this one is striking, since he seems to be competing with Gilbert in the weird, disturbing department. While Gilbert's readers are used to stuff like this (from elsewhere within this issue): 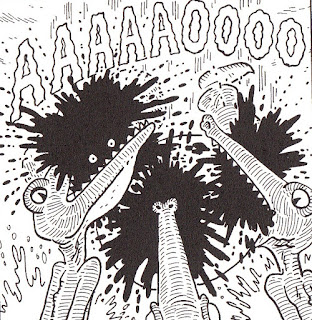 Seeing something like this from Jaime is kind of off-putting: 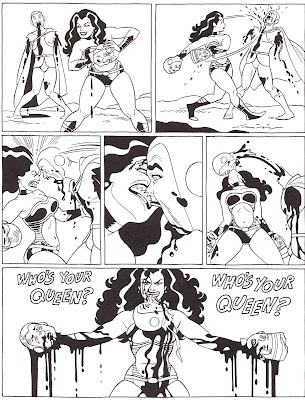 It's still pretty compelling though, with the "movie" (which Maggie and Hopey watch in a theater, although at first I thought it might have been one of the comics that Tonta's teenage friends were making, with the character based on Angel) following a disgraced space princess who is exiled to the "asteroid of sorrows" for the crimes she has committed, but once she gets there, she learns that consuming the blood of the creatures who dwell there gives her superpowers, and thus a means to revenge. It's dark, fascinating stuff, taking Jaime's penchant for depicting shapely women with a punk attitude and going in a fully nihilistic direction with it, making a scorned woman a terrible force of nature to be reckoned with.

That may have been the highlight of this year's installment for me, but the story around it, involving Maggie and Hopey meeting up to go to a reunion of their old gang in Hoppers is also very good, with the two of them reconnecting, pondering their relationships with each other and their individual significant others, and wondering if they made a mistake by not staying together. I expect we'll see more of this next year, and I can't wait.

As for Gilbert, well, I'm still enjoying the glimpses he gives of the movies that Fritz and Killer star in more than the characters' offscreen adventures, although one story called "Daughters and Mothers and Daughters" was quite good. It starts with Fritz as a baby, and it follows her, her mother, and her other relatives throughout the years, showing how choices and mistakes made echo through the generations. It's got a nice gravitas (even with glimpses of movies starring a ridiculous comedian named Ping Pong), and it offers some interesting insights into the characters' lives. The other "behind the scenes" stories throughout the volume aren't as good, but as we see how more and more of Fritz's imitators and doubles pop up, it's interesting to see how she becomes distanced from people, including what might possibly be her daughter. There's some compelling stuff to be had here, but I'm still not really feeling whatever Gilbert is going for here, whether it's meant to be Hollywood satire or just soap-opera-style drama. 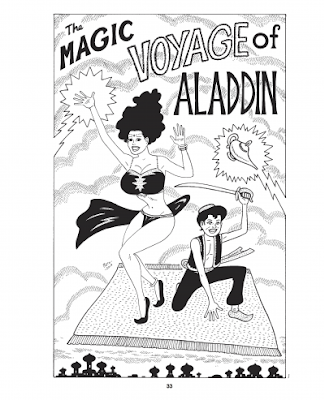 The B-movies that he shows us though, that I'm into. The longest one here is "The Magic Voyage of Aladdin", and it sees a kid playing the title part, but the most meaty roles going to Fritz and a couple of other similarly-proportioned ladies who play Morgana Le Fey, Circe, and a captured damsel, all of whom have magical powers of some sort, with everyone getting into sometimes-violent battles and all sorts of other nonsense. It's pretty goofy, but it's lots of fun, and it's the kind of thing I look forward to in Gilbert's stories in each new installment.

So, who knows what to expect for next year, but I bet it will be good. For now, we can marvel at the quiet beauty of lovely scenes like this: 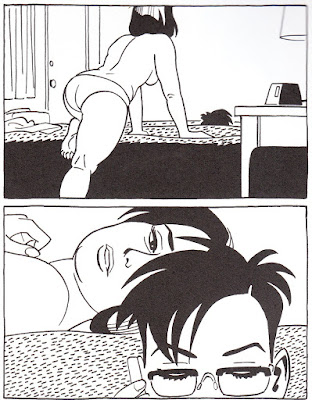