I Watch TV Too: I need more time

I got behind on Timeless, but I'm all caught up before new episodes start again, so here's a quick review dump:

Welp, Timeless is still rolling along, and I'm still enjoying it. Of the three episodes that closed out 2016, we've got one that's an "adventure of the week," one that's sort of a character piece, and one that furthers the show's overarching plot in kind of interesting ways. 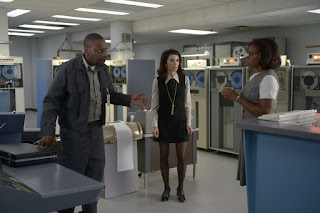 First up is "Space Race," in which the team heads back to 1969 to save the moon landing, which bad guy Garcia Flynn and his kidnapee/accomplice, the lead time machine scientist played by Matt Frewer (who I hope gets to travel to the 80s at some point and note his similarity to Max Headroom) have decided to sabotage for some reason. It gives our heroes their usual chance to geek out over being witness to a famous historical moment, and it also leads to some pretty amusing technobabble in which Rufus has to figure out how to fix a virus that Frewer infected NASA's computers with (he supposedly used a DDoS attack, which doesn't make any sense). Interestingly, he does so by recruiting Katherine Johnson, the real-life woman who was an unsung hero of the space program due to her race (she's played by Taraji P. Henson in the recent movie Hidden Figures). I do like that this show manages to work in historical figures like this and point out bits of less-remembered history.

As amusing as all of this is, with jokes about how the giant computers running the space program can hold 10 whole megabytes of data, it definitely strains credulity, with mission control spending most of the episode sitting around with their thumbs up their asses while Neil Armstrong and Buzz Aldrin sit there on the moon waiting for the guys on the ground to fix the computers. The episode also suffers from its other plot, in which it turns out that the NASA stuff is mostly misdirection so Flynn can go meet his mother and try to change his family's history for the better. I think the show is trying to humanize him, making him into a conflicted villain who does evil for what he thinks is the greater good, but it ends up being kind of a muddle, with the audience not sure who to root for or how much they should care. Oh well, it's off to the Depression for the next episode! 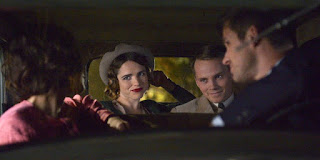 You can guess the setting of this episode from its title, "The Last Ride of Bonnie and Clyde." Unfortunately, it's not especially interesting, maybe because the actors playing the eponymous bank robbers are no Faye Dunaway and Warren Beatty. Our heroes head into the past to meet up with them when they find out that Flynn is after a key that Bonnie wears around her neck, which he has helpfully labeled as the "Rittenhouse Key" in some documents that the government recovered, so everyone knows it's important to the series' conspiracy plot.

Aside from a shootout that happens when Bonnie and Clyde rob a bank that Lucy and Wyatt have wandered into, the episode kind of drags, spending a lot of time with the characters hanging out with the historical figures and quizzing them about where they got the key (turns out Clyde stole it from Henry Ford and gave it to Bonnie in lieu of a wedding ring, since she was already married to someone else). I think we're supposed to wonder if Lucy and Wyatt are also forming a budding romance and maybe see some inspiration in these historical examples, but they don't have much in the way of chemistry, so I hope not.

Anyway, aside from an interesting scene between Rufus, Flynn (who is posing as a bounty hunter chasing the Barrow Gang), and Frank Hamer, the Texas Ranger who led the ambush that killed Bonnie and Clyde, there's not a whole lot of interest here. Flynn ends up getting the key he was looking for, and the episode ends with him using it to open a steampunk mechanism in some old-timey clock and retrieve a mysterious scroll, which we're supposed to find exciting, if the dramatic music is any indication. What does the scroll contain? Find out next episode: 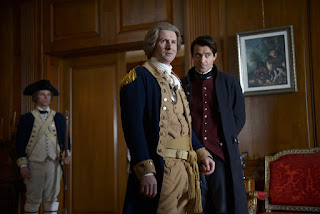 "The Capture of Benedict Arnold" functions as a Fall finale for this season, and it's back to exciting territory for the series as the cast faces their own "would you kill baby Hitler?" dilemma. This time, the gang heads back to find out what Flynn wants with, yes, Benedict Arnold; turns out he's a founding member of the evil Rittenhouse conspiracy, which is what that mysterious scroll told Flynn. We learn his plan when the team runs into George Washington and he introduces them to a familiar spy from the Culper Ring (a reference that I knew, having read Y: The Last Man) and asks them all to go on a mission to kill the traitor who recently defected to the British.

So that's their first big decision: should they trust Flynn and work with him to try to destroy Rittenhouse at its inception? Flynn tries to get them to agree by showing them that Rittenhouse is behind every travesty in American history (Lucy cites the Trail of Tears and the Waco Massacre), which is enough evidence for them to agree, I guess. When they do catch up with Benedict Arnold, the plot thickens even further when he reveals that Rittenhouse is just one man at this point in history, so if they can kill him, maybe they'll change history for the better?

This is all pretty dubious stuff, and it's the kind of thing that annoys me about not just this type of science fiction, but conspiracy stories in general. Trying to pass of centuries of horrible acts that real people carried out as a sinister plot by some evil overlords cheapens the real human cost that everyone should reckon with. Plus, it's less dramatically interesting, in my opinion. The banality of evil, the fact the real, regular people are capable of the horrors that we've witnessed throughout history is much more interesting than the idea that there is a cabal of moustache-twirling bad guys pulling everyone's strings.

But that's what you get in shows like this, so at least they make it fun by having the evil progenitor of the show's conspiracy be played by Armin Shimerman (Quark from Star Trek: Deep Space Nine). He almost immediately sees through our band of misfits' assassination plot and captures them, smirking the whole time at his superiority over them. The good guys still win, of course, but mostly out of luck and dramatic necessity, and they end up killing not only Rittenhouse, but Benedict Arnold, and the British General Cornwallis, and who knows what changes that will have on history.

But Rittenhouse's young son gets away, providing the big dramatic climax of the episode, since Flynn wants to kill him, but Lucy won't allow it, even though we got a scene in which the kid told them all about how his dad thinks that the powerful people are destined to rule over the peasants, preferably from the shadows while mollifying them with the appearance of democracy. The kid is definitely shaping up to be an evil mastermind, but now that his dad is dead, maybe he'll change? That's the argument anyway, which plays out to tiresome extent in the episode's climax, even though it seems obvious that even though the show regularly changes history, it won't actually sign off on child murder. And sure enough, the kid gets away, which enrages Flynn enough to kidnap Lucy and take her with him in his time machine, leaving us on a cliffhanger until next time.

So sure, the show is still fun, although I'm finding the conspiracy plot to be increasingly tiresome, for reasons stated above. Of the three leads, Rufus is the only one who seems to have much personality; Lucy and Wyatt are bland and boring, no matter how many times they reiterate what they're fighting for (for the former, it's to try to fix things to bring back her sister, who was accidentally erased from history; for the latter, it's to maybe try to do likewise with his wife, who died in a car accident that might have been masterminded by Rittenhouse for some reason).

Interestingly, one of the series' minor players, the Homeland Security lady who sends the team on their missions, gets one of the more affecting scenes of the entire series in this episode when she has Lucy over for dinner to meet her family, confides in her that she's horrified at the possibility that they might change history in a way that makes her wife and kids disappear without her even knowing that they existed, and asks her to carry a thumb drive full of photos and videos of them with her on her missions in case that ever happens. It's a kind of goofy idea, but it fits into what the show has been doing, and actress Sakina Jaffrey totally kills the scene, demonstrating that with a decent performance, real emotion can be wrung out of these situations.

If the show has to shoot for emotion and drama in future episodes, it would be great if it's more like this than the overwrought angst the series' leads usually engage in, but I'm not especially hopeful. Instead, I'll just be glad whenever we get to see some fun time travel shenanigans, meet historical figures both well-known and less so, and recreate various settings on whatever backlot the show shoots on. That will probably be enough for me to keep watching.
Posted by Unknown at 10:52 PM No comments: