The first volume of this series was a pretty darn good setup, establishing a situation that allowed for comedy, heart, and a bit of menace. So how do the next few volumes follow up on that? Unfortunately, I think they lean a bit too heavy on the comedy. Instead of the kids trying to learn new ways to assassinate their alien teacher, most of the time is spent on wacky hijinx, and any actual threats come from other sources.

Those other sources include: a sexy professional hitwoman who poses as the class's English teacher (she fails miserably and ends up persuaded to try to be a good teacher), a robot who acts as an artificially intelligent student (Koro-Sensei upgrades her and teaches her to work together with the other students without disrupting the class), a sniper who tries to take out Koro-Sensei during a class trip (he fails and is inspired by Koro-Sensei to learn to be a better assassin), and Koro-Sensei's "brother", who looks like another student but has shapeshifting hair that works the same as Koro-Sensei's tentacles (Koro-Sensei defeats him in one-on-one combat). That last one is one of several false teases about Koro-Sensei's past, but like all the rest of them, it doesn't really lead to anything, and the brother (or whatever he is) ends up whisked away for training so he can try again later, rather than joining the class so we can learn more about him.

Those threats are all dealt with rather quickly, which means that the rest of the time is spent on either goofy comedy or heartwarming teacher-student inspiration. Both of these occasionally connect and lead to scenes that are either pretty funny or feature genuine emotion (or both), but the ratio of hits to misses is much lower than I would like. Sometimes we get jokes that don't work so well in a Western context, like the assassin/teacher lady trying to get information about Koro-Sensei out of the students through inappropriate physical contact: 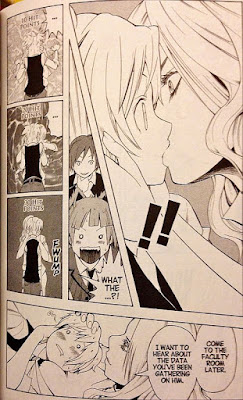 Sometimes we get weird cultural references: 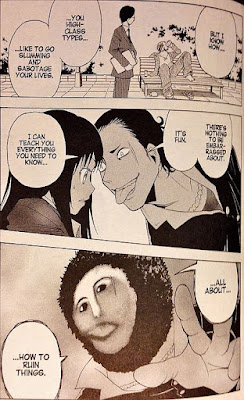 Sometimes we get fourth-wall breaking: 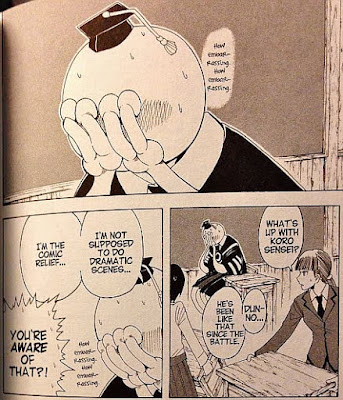 And sometimes it's just silly: 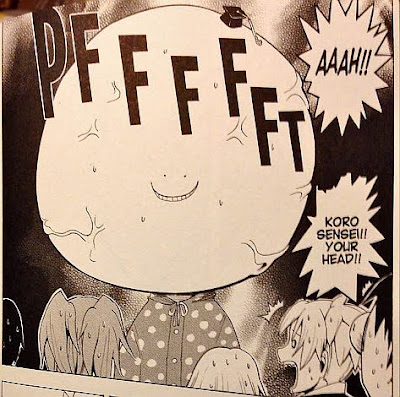 There are definitely some funny jokes here (I liked the way Koro-Sensei got so enthusiastic about a class trip to Kyoto that he writes a massive travel guide for the students that covers every possible eventuality, including what to do when a fellow student is kidnapped, which actually happens), but they're surrounded by a lot of dumb ones, as well as more of that inspirational material that doesn't always land. Again, there's a bit of a cultural divide here; one of the main conflicts is that this school encourages students to be their best by treating the lowest-ranking students (that is, Koro-Sensei's class) as second-class citizens to be looked down upon and viciously mocked. In Japan's competitive educational environment, kids can probably relate to that sort of thing, but from a Western standpoint, it's just kind of weird. And unfortunately, it's one of the main sources of drama, whether students are fighting back against bullies or trying to overcome systematic pressure, like the school's principal, who insists on keeping them at their lower tier as a lesson to all the other students. That means we get too many stories in which Koro-Sensei inspires his students to overcome expectations, when I'd rather be seeing them work on their assassination skills.

I suppose it's not fair to judge a comic by what I would like it to be instead of what it is, and maybe I'm just far enough outside the target audience that I can't relate to the characters, but it ends up falling short of my expectations. Maybe it will eventually get back to assassination attempts as Koro-Sensei's deadline for destroying the earth approaches, but I expect that if I keep reading it, I'll just have to accept it for what it is. I guess it will have to do, but I wish the comic would strive to be its best the way its main character encourages his students to do. Come on kids, you can kill that lovable, inspirational alien! I believe in you!
Posted by Unknown at 10:16 PM No comments: