One Punch Man: When you start out big, where do you go next?

One Punch Man, Volume 5-6
Story by One
Art by Yusuke Marata
Published by Viz Media 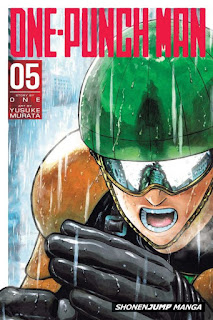 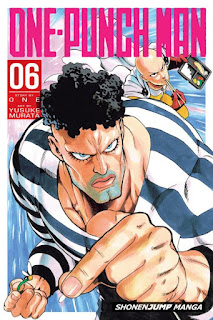 One thing I enjoy about shonen manga is its sense of growing scale. Stories often start out following one character or group as they seek to become the best fighter/ninja/pirate/whatever in the world, and they slowly get better and better as the series progresses, gathering allies and gaining strength until they're ready for a massive final confrontation with the forces of evil. It's a great formula, one that makes following a lengthy narrative over the course of multiple volumes really satisfying.

But as with any formula, it can be fun to subvert it and play against expectations. That's what this manga does, with its main character starting off the series as the strongest there is at what he does and then subverting tropes as he easily defeats any threats that he faces. The creators get a lot of mileage out of the comedy that comes from a guy who is kind of a schlub being super-awesome, with his struggle being to find a worthy opponent, or just to get through his normal life when he's too good at what he does.

The fact that this is a superhero comic also gives the creators a chance to put their own spin on that genre. And they certainly do so, making this a very manga take on capes-and-tights, with characters competing to attain certain rankings in a superhero system that's strictly controlled by an organizing body. There's also an emphasis on master/student relationships, although the central one, between main character Saitama and his cyborg disciple Genos, regularly gets upended, as the student is the competent one, only following his teacher in an attempt to discover how he reached his off-the-charts strength levels.

So really, this manga is all about comedy, as well as plenty of shonen manga style awesomeness. Saitama is an impossibly strong superhero, able to defeat any enemy in a single punch, but how he got these powers is a mystery (he claims it came from working out so hard that all his hair fell out, he lost all feeling, and he gained incredible strength, but when he describes his workout regimen, it's not exactly back-breaking). 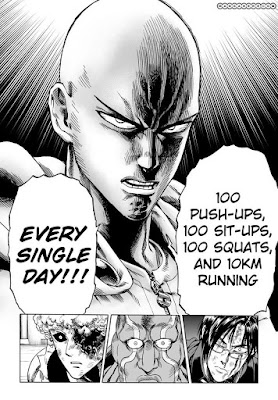 The first few volumes of the series saw Saitama wondering why he was having trouble achieving recognition as a hero, until he realized that he hadn't joined the Hero Association. Once he did that, he then struggled to be able to officially defeat bad guys, and since he was ranked so low, people thought that he had somehow cheated and couldn't possibly be so strong. And lots of other stuff, like rivalries with other heroes, got in the way of his progress. But maybe things are finally starting to look up for him as new threats that require his awesome strength arise.

As volume 5 starts, several other heroes (including an offensively-stereotyped gay-panic-themed weirdo named Puri-Puri Prisoner) are facing a monster named Deep Sea King who has invaded land and begun killing everyone he sees. It takes Saitama most of the volume to even show up for the fight, giving everyone else the chance to defend innocent bystanders and make courageous stands against impossible odds. We get plenty of dynamic spreads in which punches explode off the page: 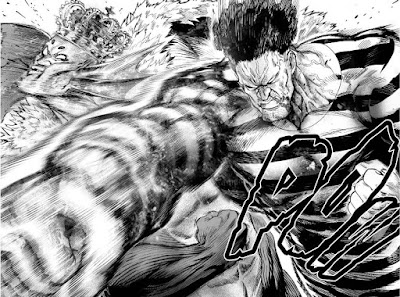 But when Saitama finally gets there, he ends things pretty quickly, as always. But perhaps this is the moment when the creators decided that that joke can only go so far, so they spend the next volume or so building up an impossibly large threat to the planet in order to give Saitama an opponent who can survive a fight scene longer than a page or two. As seems to be standard for the series by now, it takes an entire volume of build to get to the confrontation (with lots of page time devoted to other heroes fighting over-powered bad guys in awesome manner), so we'll have to wait until volume 7 to see how it finally plays out, but given the series' track record with comic timing, I bet it will be pretty enjoyable.

So, this is a fun manga, full of dynamic action with stakes that are ridiculously high (entire cities are regularly laid to waste during the battles that take place), but an emphasis on comedy that keeps things light and silly while still taking plenty of time for general shonen awesomeness. One area of particular interest (to me, at least) is the way that Saitama himself is depicted. Artist Yusuke Murata uses a visual alien style when drawing him most of the time; where everything else is hyper-detailed and full of speed lines, Saitama himself is usually drawn with simple lines and minimal detail. It's another weird bit of comedy for the series, emphasizing that the main character is something of a blank slate, and someone who doesn't really fit in with what's going on around him. 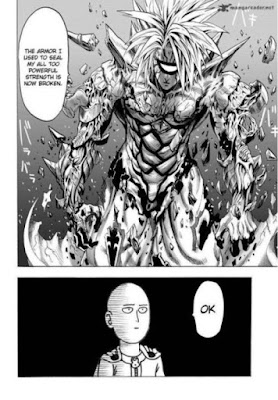 The series makes for a really enjoyable read, albeit one that goes by quickly, since so many pages consist of characters attacking each other in explosive bursts of power, but I'm happy to spend that time having fun and being entertained by whatever nonsense the creators come up with next. I don't know how long they can sustain things, but I'm definitely planning to see them try.
Posted by Unknown at 6:28 PM 4 comments: