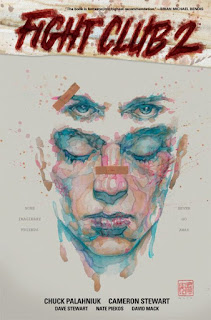 I used to be a huge fan of Fight Club; for a while, I said it was my favorite movie (I still think it's one of the few cases where the movie is better than the book). However, as the years wore on and the passions of youth faded, I realized that it hit me at the perfect time in my life, right when I was in that "idealistic young man" phase and thought that the insights it offered about men being feminized, relegated to meaningless jobs, and pacified with mindless consumerism were profound. I do still think there's some bite to the story, and the movie is so stylishly presented that it makes for a hell of a thrill ride, enough so that it's not just easy to miss the story's secondary moral about the dangers of giving yourself over to a charismatic demagogue, it almost makes the fascism that rises out of this demagoguery seem attractive.

Interestingly, that arguably makes Fight Club as relevant as ever, even though it's very much of its time, reeking of 90s slackerism and pre-9/11 ennui. But while a case could be made for Fight Club as an examination of exactly the sort of white man's fear of irrelevance that has led to the rise of Donald Trump, the comics-format sequel has nothing in the way of relevance to modern times. It's a strange attempt to recapture the magic of the original, but it never offers a reason to revisit these characters, a desire to look at how society has changed in the 20 years since the book's release, or anything more than some noncommittal gestures at new and interesting ideas.

Frankly, I'm kind of baffled as to why this even exists. I'm sure Chuck Palahniuk doesn't need the money, but if he did, he could surely have made more of it by writing a true sequel novel and selling the screenplay rights. Maybe he was so bereft of ideas that no book editor would accept them, so he went with the comics industry, which will instantly bow down before any hint of wider celebrity that deigns to approach its ranks.

So, the story that Palahniuk has apparently been waiting 20 years to spring on us is that Fight Club's narrator, here called Sebastian for some reason, but also sometimes referred to as Running Wolf, has basically gone back to his boring life as a corporate drone, now medicated to keep his alternate personality in check and trapped in a loveless marriage with Marla (they also have a kid who seems to be exhibiting strange tendencies involving an obsession with explosives). But! Marla is bored, so she has been swapping out his pills with a placebo in hopes of reawakening Tyler Durden and finding some passion in her life. Except we also find out that Sebastian's psychiatrist has been regularly hypnotizing him in order to bring Tyler out and let him secretly work on taking over the world.

Based on this opening, maybe Palahniuk had something in mind about the idealism of youth quickly succumbing to the easy complacency of family life. Or, when he reveals that Tyler has been operating a corporation that provides paid military contractors to countries around the world (which is apparently the only societal concern that Palahniuk has picked up on since 1999), one wonders if he's trying to comment on the way American society is happy to spread death and destruction as long as it's happening on the other side of the world. Both of those ideas are a stretch though, and Palahniuk doesn't do anything with either of them. Instead, he sets up a plot involving the kidnapping of Sebastian and Marla's son, Sebastian trying to infiltrate the ranks of Tyler's army (which still operates out of the crappy house they lived in together), and Tyler apparently planning to destroy the world in a nuclear holocaust. There's also a nonsensical subplot about Marla organizing an army of her own through a support group of kids with progeria who get a stand-in for the Make-a-Wish Foundation to parachute them into war zones for some reason, and Robert Paulson (the man with the bitch tits) seems to have also risen from the dead as some sort of zombie minion, I think?.

To tell the truth, I don't really know what was going on, and I found it hard to care. Palahniuk's main objectives here seem to be to wander through a vague plot without much in the way of forward momentum, make a few jokes that fall far short of the thrilling transgressiveness of his early work, and compliment himself on the way Fight Club has become a cultural touchstone. He even has himself show up in the story to advise the characters on what to do when the plot seems to have stalled, but the joke doesn't really work, since there doesn't seem to be any drive to the story either before or after that point.

The whole thing ends up being a mess, one that has nothing of interest to say and no real reason to say it. The one slightly clever idea that Palahniuk comes up with is that Tyler Durden is a self-propagating meme that has existed for thousands of years, but his choice of comics as a medium (and Cameron Stewart as an artist) sort of shoots him in the foot in that respect, since that's the sort of idea that comics writers like Grant Morrison have been tossing off in their sleep for years. Palahniuk seems to recognize his desperation, since he spends the entire final chapter of the story having the characters berate him for coming up with a dumb ending. If only they had let him know about the beginning and the middle as well, not to mention the very conception of this comic, which fails on pretty much every level to justify its existence.
Posted by Unknown at 10:12 PM No comments: