Love and Rockets: How is it possible that Jaime keeps getting better?

Love and Rockets: New Stories #4
By Jaime and Gilbert Hernandez
Published by Fantagraphics 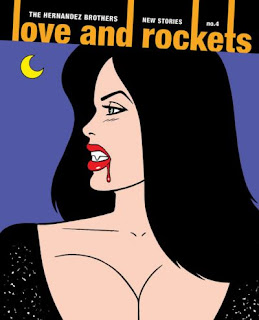 There's one beautiful, affecting page in the Jaime half of this latest issue/volume of Love and Rockets, seeing a morbidly obese woman reflecting on her marriage as her husband returns home, recalling the ups and downs of their relationship and how he fell out of love with him and then back in, all without letting him know about her inner emotional turmoil. It's absolutely lovely, and even tear-jerking, contrasting a person's silent, impenetrable exterior with the multitudes contained within and suggesting a fascinating life story briefly glimpsed in single panels, as if we're peeking through windows and guessing at everything that is going on. What's even more incredible is that this is the first page of the book, a tossed-off aside to Jaime's main story, showing the full extent of the world that exists all around the main characters. That's the level of skill he's working with here, and it's an excellent indicator of what is to come in the rest of "The Love Bunglers", which concludes here to powerful, resonant affect.

The finale of the story Jaime has been telling over the past couple of annual issues is a moment of bravura comics storytelling, but the buildup to it in the opening portions of this issue is pretty great a well, the kind of "hangout" comics that he has been doing for years (decades, really). We see the characters living their lives, with Maggie planning to open a garage, Ray pledging to provide the venture's startup money as an excuse to get close to her, Angel having some romantic escapades before leaving for college, and other characters orbiting around the edges of the story, all portrayed in a lively manner that makes their down-to-earth activities enjoyable and attention-grabbing, offering readers an experience akin to spending time with friends. It's what one expects to see when reading Love and Rockets, and Jaime has been doing it so consistently for so long that his excellence has become expected, the deft characterization and art that captures the movements and rhythms of life with just a touch of cartoony exaggeration transformed into a ho-hum normalcy. It's the curse of familiarity, but luckily, the greatness is still there when you stop to look at it. My favorite aspect is the flourishes of expressive body language that the characters display, like Maggie changing her clothes while making a phone call:

Or Angel bending over to plant a kiss on the object of her affection:

There's a flashback chapter similar to last year's "Browntown" story, although not nearly as devastating, in which a friend of Maggie's relates what happened when the Chascarillos returned to Hoppers after the events of that story, with her uncomprehendingly trying to pick up her friendship with Maggie where they left off without understanding the cause of the emotional turmoil Maggie and her family are going through. It's as nicely done as everything else, every image narrated in a believably pre-teen voice, concerned with the affairs of adolescents, puttering along with a nice, amiable rhythm before receiving its own abruptly tragic ending. It's very effective in what it does, quickly establishing its characters at a specific point in their lives and illuminating another heretofore-unknown area of Maggie's past.

Ah, but as nice as these stories are, they all seem to be prelude to the dazzlingly virtuosic end of this chapter in the Locas saga, which breaks format from the usual straightforward storytelling to engage in some formal play before taking some jarring jumps forward in time to see Maggie and Ray's relationship play out over several years. It starts with a scene in which Maggie and Ray separately realize they need to be together, with a page of mirrored panels that sees them rushing toward a middle ground. The imagery indicates that they are already most of the way there, their surroundings continuing off the panels as if their worlds are already blending together, the characters themselves steadily moving closer and closer together, until Ray is pulled off course in the last panel with what turns out to be a devastating distraction: 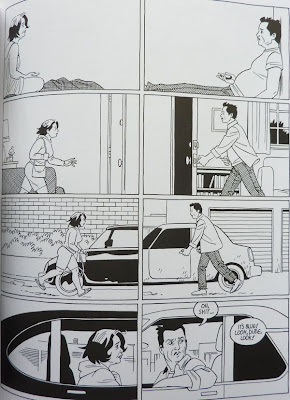 This is then followed up by a two-page spread that sees a number of individual moments from throughout the characters' lives (and also throughout the course of the series; see here for annotations), each panel offering one character's view of the other, with the corresponding reverse view situated on the opposite side of the spread. It's a beautifully moving collection of memories, a lifetime of shared moments piling together and forming a sort of jigsaw puzzle image, or at least a portion of a whole that still seems to fit together seamlessly. And then Jaime plunges forward with abandon into the future, giving readers short glimpses of everything that transpires in the characters' relationship, but still making each moment satisfying and heartfelt. It's a leap headfirst into what seems at first to be a sad life apart before Maggie and Ray inevitably fall back into each other's orbit, capping things off with an ending of sorts, as least for now. This could signal an end to the current era of Locas stories, but these characters are less figures of Jaime's imagination than real people alive in the minds of readers everywhere at this point, and even if another story featuring them never appears, we can rest assured that they will continue to live on, somewhere, sometime.

Oh yes, there are also some stories by Gilbert in this volume, but compared to the excellence on display in Jaime's milieu, they're pretty negligible. Killer and Fritz co-star in a vampire movie that's all about youthful attitudes toward the future or peer pressure or something, and then Fritz meets with a male friend (ex-lover?) for an afternoon of conversation that is pointedly, purposefully meaningless, dancing around any subject of substance and sticking to philosophical absurdities, refusing any questioning of themselves or each other, perhaps as an attempt to enjoy each other's company without getting too involved. Both stories are nice enough, the vampire thing being a decent example of the recurring "B-movies" that Gilbert has been returning to in recent years, and the conversation scene having a nicely playful air, but it all ends up being pretty lightweight in comparison to the fantastic artwork and storytelling on display in the other half of the volume. Hopefully some brotherly competition will spur Gilbert to take things up to another level, because as of 2011, Jaime is handily winning the "Best Hernandez" competition.
Posted by Unknown at 7:00 PM