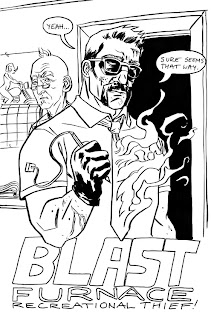 Full disclosure: I'm friendly with Ryan Browne "in real life", so feel free to take the effusive praise directed his way with a grain of salt. I do really dig his comics though, really!

Ryan Browne's God Hates Astronauts is a comic masterpiece of a superhero parody, but he's got plenty more goofy humor to share with the world, so he recently set out on a quixotic quest to create a year-long webcomic off the top of his head, posting new pages every weekday, ostensibly following the adventures of the eponymous flaming-tied, handlebar-mustached master thief, but often charging off on random tangents, flashbacks, fantasies, and non sequiturs. In fact, those non-main-plot bits seem to have taken over the story, with a good deal of the comic so far being devoted to several nested flashbacks involving an outlaw owl, the naive bear she drags into a life of crime, and an Indian warrior named He Who Looks Like A Horse But Is Actually A Hideously Deformed Man, and also a separate plotline involving a pair of villainous henchmen who resemble the turtle and pirate from old comic book "Can you draw?" ads. 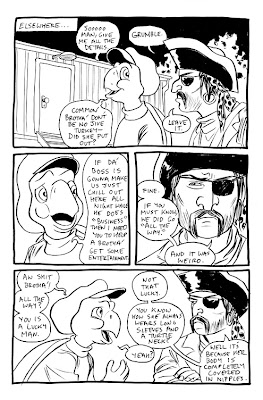 Blast Furnace himself has spent most of the comic killing or maiming everyone he comes across, making enemies and getting involved in ridiculous plots, possibly all leading up to a climax that ties everything together, if Browne can manage to wring a semi-coherent throughline from all this weirdness. No matter; it's all hilarious stuff, with Browne unleashing all the nonsense that's apparently cluttering up his head, including silly sound effects, horrifically funny violence, talking animals, barely-covered nudity, and goofy concepts like a giant businessman robot made of other combined businessmen robots, all delivered at a breakneck pace, concepts and jokes spilling onto the page at such a rate that nobody, apparently even Browne himself, have any idea what's coming next. That's webcomics heaven, if you ask me. 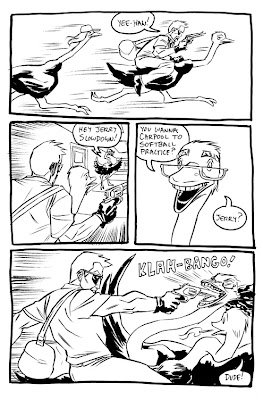