Love and Rockets: New Stories: I'm still way behind on the old ones

New webcomic for the sidebar:  Shrub Monkeys.  Great cartooning there, and pretty funny too.  Noticed via Scans_Daily and Journalista.
Love and Rockets: New Stories #1
Written by Gilbert, Jaime, and Mario Hernandez
Art by Gilbert and Jaime Hernandez 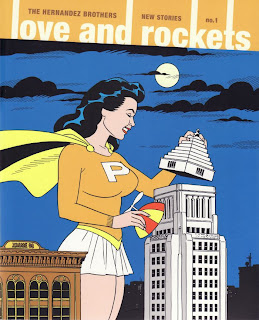 The Hernandez brothers have switched their series to an annual format, and it's a nice move, since it's great to get such a big chunk of their work all at once.  And they seem to be moving in some interesting directions, especially Gilbert, as he continues to demonstrate his storytelling skill and tell creepy surreal stories along the lines of Grip, Sloth, and Chance in Hell.
In fact, Gilbert has some fantastic stuff here, with the standout probably being "The New Adventures of Duke and Sammy", a goofy sci-fi story starring two comedians based on Dean Martin and Jerry Lewis.  It's a hilarious romp that sees them show up on alien planets and either massacre or dominate the natives, gaining and losing super-powers in the process.  Why?  Hey, why not?

Actually, that one is fun, but "Victory Dance" is probably the most compelling and assured, demonstrating Gilbert's knack for conveying a story that makes sense but requires some work on the reader's part.  In just six pages, one of which is wordless, we learn the backstory of a character named Julio who has recently suffered a tragedy.  But while the nature of said tragedy is never explicitly explained, it is discernable from the characters' dialogue and actions, with scenes jumping abruptly in time and space, reminiscent of Gilbert's masterpiece "Poison River".  It's wonderfully done, the kind of work that only a confident master cartoonist like Gilbert can manage.
Gilbert's other stories in the volume work mostly on a visceral, subconscious level.  "Papa" is a sort of prequel to "Victory Dance", but it's mostly unrelated, following a man as he wanders a strange landscape and ends up swelling up gruesomely after eating a poisonous-worm-infested taco: 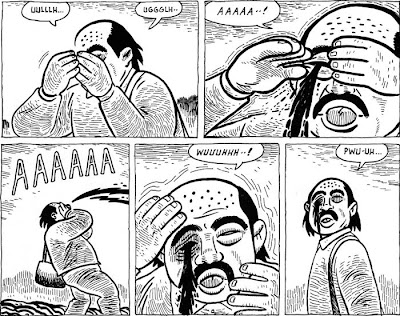 There's also "?", which is a silent succession of surreal imagery, and "Never Say Never", which follows an anthropomorphic kangaroo who gambles in a casino and pals around with giant hot dogs.  Yeah, I don't know either.
And then there's "Chiro El Indio", which is written by Mario, the third Hernandez brother who occasionally shows up in the series.  It's a comedic tale about a moronic Indian man named Chiro and his equally dumb wife Preciosa, who both get manipulated by scheming land-grabbers working with the Catholic church.  It's pretty silly, but still enjoyable, and it features some nice, cartoony art by Gilbert: 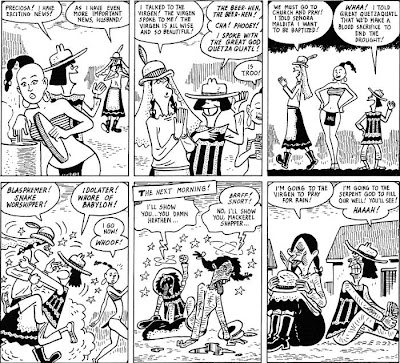 For the other half of the book, Jaime provides an update to his long-running "Locas" universe, this time focusing on the superhero content that has lurked in the background while he was spinning realistic drama.  He seems to be interested in going wild with goofy action and crazy plots, and more power to him, because he's incredible at it.  He's always been great at dynamic storytelling and action, and that benefits this type of story well, along with his sense of humor, which keeps things lighthearted and fun.  The story involves the search for Penny Century, who has finally succeeded in her series-long quest to gain super-powers, but lost her children in the process and is on an intergalactic rampage of grief.  Maggie's friend Angel, who turns out to be a superhero named Boot Angel, teams up with several other superheroines to try to stop her.  It's pretty wild, but it's tons of fun, with lots of action, like this scene of Angel and another hero named Alarma fighting some robots: 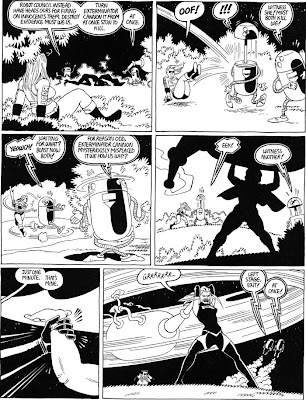 In fact, Jaime is so good at motion and anatomy, that you can't help but stop and marvel at how well he does this sort of thing.  I love the way the bodies get realistically tangled in the second panel of the following sequence, and the flowing hair, speed lines, and other signifiers of motion are incredible to behold: 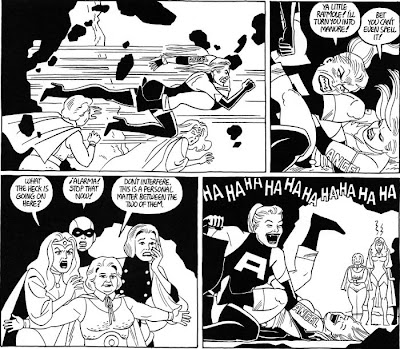 I certainly would like Jaime to get back to his other characters at some point (although I don't mind waiting, since I still haven't read volume 2 of the series), but if he wants to keep going with this superhero stuff, I don't mind, because he makes it incredibly enjoyable.
So it looks like Los Bros are still far from hitting a peak and going downhill; it's pretty astonishing that they've kept up such a consistent level of storytelling for nearly thirty years and are still going strong.  Let's hope they don't stop anytime soon.
Posted by Unknown at 8:30 PM