Red Colored Elegy: I found it to be gray-colored drudgery

This was on my "to read" list for 2008, but it won't be making the "best of" list.  Here's why:
Red Colored Elegy
By Seiichi Hayashi 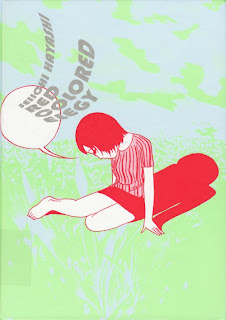 I usually try (and also usually fail) to stick to an objective, third-person tone in my reviews because it fits the style of the serious-minded, no-nonsense critic, but occasionally I feel that I have to take a more subjective, first-persone tone.  This is one of those cases, mostly because I feel that my response to this book is personal, and mostly a matter of taste.  Does that instantly invalidate whatever I have to say?  Maybe!  But people still might be interested in my opinions, and what else is a blog for, if not shouting those sentiments into the ether?
Anyway, Seiichi Hayashi's Red Colored Elegy is a Japanese comic from the early 1970s that fits quite well in the paradigm of the "boring autobio comic" that often gets slapped upon the "artcomix" genre as a whole.  It might not be autobiographical, but it's at least informed by very real emotions, and that's one of its saving graces.  A story about two young lovers who seem stuck in a perpetual holding pattern, it spends page after page seeing its characters writhe about in personal agony over their romantic and professional ambitions, or lack thereof.  It has been compared by at least one person to Inio Asano's more recent Solanin, but I personally found the latter work to be much more engaging, featuring characters which I felt I could relate to, or at least recognize.  Hayashi's book, on the other hand, is much more elliptical; his characters are less grounded in a time or place (although the back cover text describes them as "uninvolved with the political movements of the time", which may have grounded them by picturing them as adrift, and thus different from others of that era), literally left floating in empty space and unable to escape the emotions swirling around inside their heads: 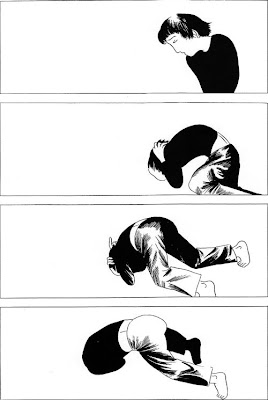 In fact, much of the book seems to be scene after scene similar to that page.  The two main characters, Ichiro and Sachiko, converse with each other while hunched over, minimal expressions on their faces, tormented by unexplained (or implied) emotions.  It's like a French film in which nothing is discussed directly; everything is left to the reader to suss out, and we only see the outward actions and words.  They seem to be tormented by their feelings, but they never tell us (or each other) what those feelings are.
And that's where I disconnect from the book, while understanding why others may find it compelling.  I can get behind that sort of thing on film, because it's a gold mine for good actors to demonstrate emotion without using words.  But here, the drawings are so minimal that all this inner torment seems to take place underneath near-expressionless faces.  It's rare for a character's face to show any more emotion than you can get from this silhouette: 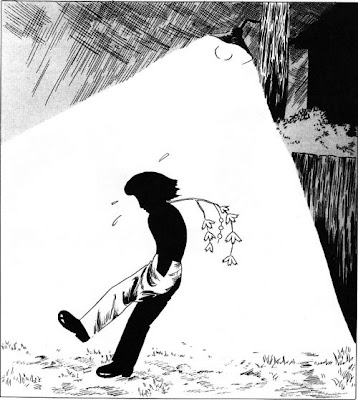 That profile view is near-omnipresent in all the character art, and only slight variations on it ever pop up; we might get a slanted eyebrow or a widened eye, but nearly every scene sees that same minimally-expressive side view.  Instead, emotion is shown through cartoon shorthand like flying sweat drops and tears, or "overacted" body language: 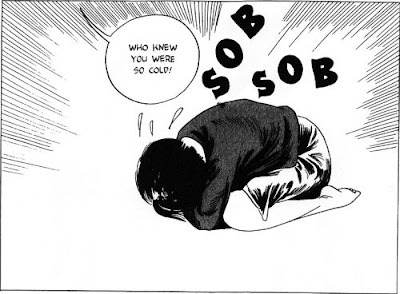 The percentage of pages in the book containing contorted bodies like that must be at least 75; it seems like Ichiro and Sachiko can't have a conversation without one or both of them twisting into anatomically improbably positions, curling up into their bedsheets, or pressing their bodies together, sometimes sexually.  It's tiring to watch, especially when most of the time you aren't even sure what they're so upset about.
Not to belabor the Solanin comparison, but the emotional angst in that book was understandable and relatable.  Here, it all seems to be about job- and relationship-related expectations.  Ichiro works as an animator, but he wants to quit and draw comics.  Sachiko is facing pressure from her parents to get married, but Ichiro isn't ready.  They love each other, but they aren't happy.  That all makes sense, but the lack of communication (both between each other and between them and the reader) makes them seem like emotionally-crippled depressives, unable to have a conversation without curling up in a ball and crying for a few hours.  Maybe that's the case; maybe Hayashi meant to show them that way, presenting the story of mentally-unhealthy people trying to have a relationship and function in society.  I really can't tell if that was the intention or if this is just an emotionally-heightened style of drama.
But like I said, obviously that worked for some, including many in Hayashi's homeland, since the book was very popular and influential.  It just didn't for me.  But while I found the plot and characters inscrutable, I did enjoy much of the art, which (inexpressive faces aside) is often quite gorgeous.  As mentioned, those contorted bodies can be quite expressive, especially in the thick, slashing lines of ink that define the wrinkles in their clothes and other fabric, like crumpled bedsheets.  There's one full-page splash image of a sex scene that is amazingly physical: 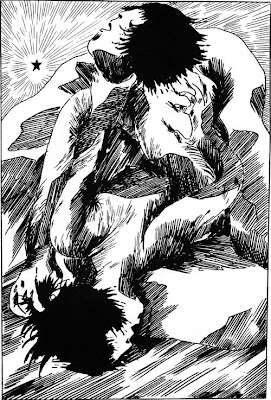 And the background shots that Hayashi often pauses to depict are quite gorgeous, displaying mountains, oceans, landscapes, and buildings in beautiful detail: 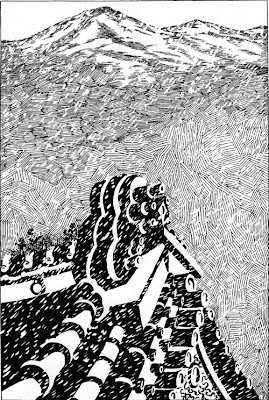 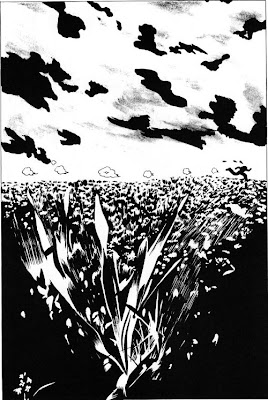 And some of the repeating imagery is haunting, like a scene of a lamp swinging from a cord that seems to keep reappearing throughout the book; I don't know what it means, but it and other visual motifs add to the layers of imagery very effectively.
Really, as I said, it's a matter of taste.  I didn't find the book satisfying, but I'm sure others have and will.  There's definitely plenty here to chew on; it's not a simple work by any means.  That's the case with so many of those works that naysayers dismiss as "boring, pointless autobio comics", and that's what rankles those of us who like to experience mature, thoughtful work so much.  So don't think that I'm pooh-pooh-ing this book; I'm just saying that it didn't connect with me on the level that I wish it did.  As it is, it's an interesting work that contains some incredible imagery, but I wanted it to be more.  Oh well; I'll always have Solanin.
Posted by Unknown at 8:10 PM