Kazuo Umezu appears to be attempting to blow everyone's minds with the sheer insanity he's producing here (or he was forty years ago, but despite its age and specificity of cultural commentary, this series is vibrant and modern, not a relic of the past).  Each new volume presents fresh horrors and depravities to witness, and one can only hold on and enjoy the ride, never knowing what's coming next.  This book sees a character who disappeared something like six volumes ago show up again, having inexplicably aged into an old woman and only staying alive long enough to utter a few cryptic words about a "paradise" near Mount Fuji.  So, since there's nothing left for them where they are, the kids all set out across the wasteland to see what they can find.  There's a lengthy scene in which they spend a good 30 pages trying to cross a deep ravine, culminating in an awesome bit of chivalry as Sho helps an unconscious classmate bridge the gap: 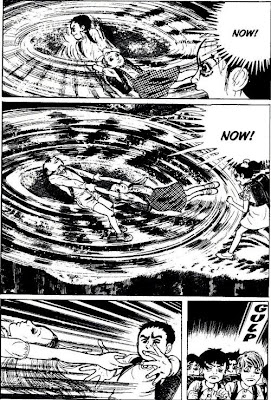 And then it's on to "paradise", which turns out to be an old theme park populated by murderous robots, including some awesome dinosaurs and what appears to be a decrepit version of Marilyn Monroe: 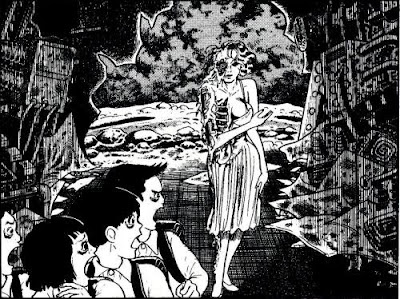 Wow, that's a disturbing image, especially given that we see her both before and after the freakishly sexualized damage to her exterior, with the supple, healthy-looking "skin" crumbling away to reveal the inhuman horror underneath.

After this, the situation manages to devolve even further, as the kids get more desperate and violent with hunger, eventually resorting to all-out war between the two factions, and a final battle to the death between Sho and Otomo.  But first, there's a scene in which they discover a computer which, in a bit of deep irony, speaks to them about the wonders of the future, even while it comes shuddering to a stop against a backdrop of a barren, destroyed wasteland.  Umezu makes this scene both funny and disturbing, with the old-school dials-and-switches machine sporting a goggling robotic eye and a ridiculous faith in the validity of its predictions of the glories of the future: 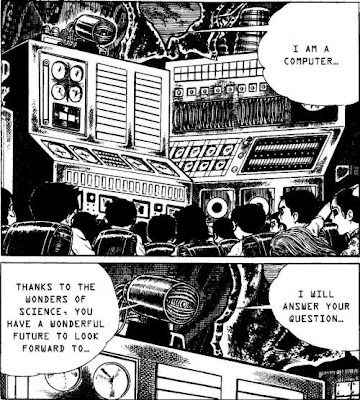 But that's just an interlude before the big final conflict, which sees Otomo's gang resort to cannibalism, and leading to some of the most striking moments in the series' history, as the kids guiltily proceed with their horrible deed:

And the way Umezu draws out the fateful moment as the selected kid consumes the results of said action is just terrible, fraught with trepidation, guilt, disgust, fear, and, yes, hunger: 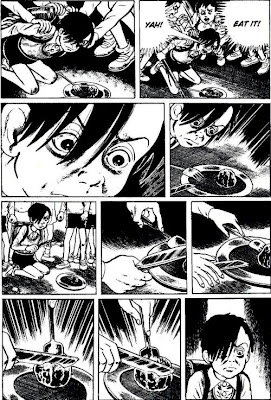 This volume is chock full of such incredible moments; Umezu has gained confidence by this late point in the story, and he's able to deliver on such bits of terror as the moment when the robot dinosaurs populating the theme park wake up to terrorize the already-brutalized cast: 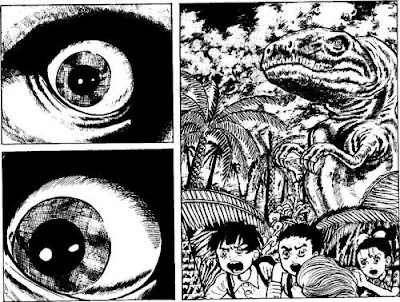 Or the gasping suffocation of some kids who get caught in a cloud of toxic gas:

Maybe it's the fact that these are children dying such horrible deaths, but even after all the mayhem and gore that we've seen throughout the series, Umezu makes each new demise felt; reader's can't help but cringe at the fear and horror of what happens.  Or gasp in shock, as in the regular "holy shit!" moments, like some of the older kids murdering a group of first graders for their food:

Holy shit!  Or the robot lady crushing another kid's head: 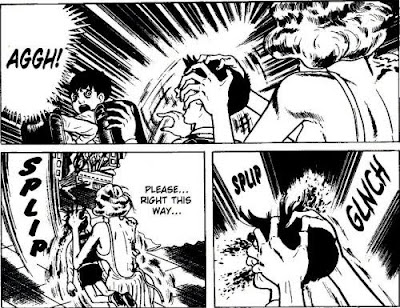 Shit.  And when everything devolves into mayhem and warfare, the deaths come fast and bloody, but they never seem like routine: 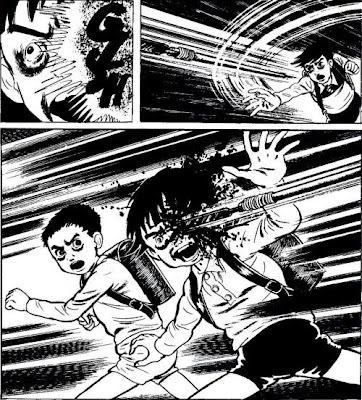 Holy. Shit.  Man, no matter how many times I see kids die horribly, I don't think I'll ever get desensitized.  At least, not when Umezu does it, since he's sure to plop readers right down in his terrible world and make it feel like a real death rather than a shocking stunt.  It's amazing, and pretty incredible to see the extent to which he is able to take things.  There's only one more volume to go, and whether or not Umezu can manage to "believably" end things, perhaps by finding a way to return the survivors to their own time or just massacring them all and fading to black, it's been a hell of a ride, and one that should stand the test of time as a work of comics like nothing else in the history of the medium.
Posted by Unknown at 10:14 PM