Meanwhile: ...Scott McCloud is high-fiving everyone in celebration 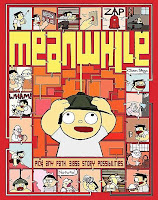 The "choose your own adventure" style of storytelling is an interesting one, but the gap between potential and realization is a big one.  It's hard enough to write a good story, but to together one that has branching plotlines and multiple resolutions and can still capture the attention of a reader can seem not even worth the effort.  So thank god for thinkers like Jason Shiga, who with this book manages to not only weave a compelling story in this style, but uses the comics format in interesting and innovative ways while doing so.  It ends up being a fascinating book, one that encourages the reader to pore over its pages for clues and details, figuring out the secrets that Shiga has buried within them.  It's an ambitious work, and one whose reach mostly manages to keep from exceeding its grasp.

That story?  It starts out simply with a kid at an ice cream store making a choice between chocolate and vanilla, but things soon spiral off into craziness, as he ends up in a mad scientist's lab, with the choice of several different inventions to try out, with wacky results no matter which branch of the plot is followed.  There's time travel, mind-reading, and other shenanigans, and while it's fun, delving into its secrets eventually reveals a surprisingly moving (and maybe even a bit awe-inspiring) story underlying the goofy antics on the surface.

The real appeal, though, is seeing what neat idea Shiga will come up with next.  His comics panels connect to each other every which way, with trails between them stretching across pages, weaving around and through each other, and leading from page to page via an ingenious tab system.  It's like a physical version of Scott McCloud's infinite canvas, and it works perfectly intuitively, especially when the time-travel plot loops back upon itself, or when the main character gets caught in an infinite cycle of calling himself names.  Shiga even comes up with some wonderfully effective ideas, like an illustration of a coin flip that actually seems like pure chance, or a couple of  "secret codes" that equate finding the correct story path to cracking a safe.

If there's any complaint to be had, it would be the semi-crudity of Shiga's art, which sees all the characters sporting circular heads and gaping red oval mouths, but he uses the style well, keeping the story moving and emphasizing the weirdness and wild ideas.  It's easy to follow, providing a welcome opposite number to the daunting complexity of the story's structure.

Yes, comics could certainly use more deep thinkers like Shiga, who are willing to push the limits of the medium and still use it to tell good stories.  The far extents of what can be done have yet to be reached, but we can probably rest assured that he'll be right there on the front lines, coming up with new ideas that blow all our minds.  Who knows what's coming next, but it'll be a blast to see.
Posted by Unknown at 8:44 PM