The Splendid Magic of Penny Arcade: That's one way to describe it

Elsewhere: I reviewed Punisher #15 for Comics Bulletin, and Capitalism: A Love Story (Michael Moore's latest movie) for The Factual Opinion.  Hey, it appears I haven't completely given up on writing.

One other link: Dustin Harbin's Kickstarter project looks pretty nice; I might have to contribute to that one... 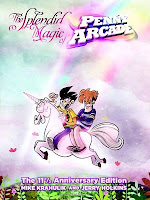 Webcomics are often a fan-focused endeavor, relying on dedicated readers to purchase enough ancillary material (including print versions of what they can usually read online for free) to keep the object of their affection afloat.  There have been varying levels of success in this business models over the past decade or so, but probably none more notable than Penny Arcade, the videogame-focused webcomic that has risen to such prominence that it has spawned a mini-industry unto itself.  So, to celebrate more than a decade of success (and occasional failure), the creators have put together another bit of merchandise for the fans to purchase, this art book/retrospective/celebration, which could be viewed as an excuse to bilk more capital from their readers, but does certainly provide plenty of what those readers are eager for: lots of personality from the strip's creators, a comprehensive history of the twists and turns of the comic's existence, and a healthy selection of some of the best art that has appeared on the site.  Overall, not a bad package, and one that will probably be eaten up with gusto by those devoted followers.

While the information included here probably isn't brand new or an unprecedented level of access, it's still a good resource for anybody who wants to know more about the history and behind-the-scenes operations of PA.  The book includes an in-depth history of the authors, Jerry Holkins and Mike Krahulik, written by Chris Baker, who also penned a Wired article about the pair in 2007.  There's a transcript of one of their writing sessions, a look at the various characters that populate the strip, descriptions of brushes with the law, interesting articles about the Child's Play charity and Penny Arcade Expo, a selection of reader-submitted questions, and plenty of other content, sure to please those who would want to own such a keepsake.

But what of the comic itself?  The book does include a selection of the creators' favorite strips (interestingly, Holkins chooses a selection that illustrates various aspects of the strip's creation, while Krahulik just goes with the ones he thinks are funny), and it reproduces several extended storylines or continuing characters, which is another interesting choice, since those are something of a rarity in the archives, with most installments being a standalone joke referencing some videogame-related topic.  It is a good opportunity to see the pair's experiments with longer storytelling, since they have a unique sensibility for timing, and whenever Krahulik has a chance to stretch artistically, the results are fascinating to behold.  They do get held down a bit by their sillier impulses however; a series of samurai-themed strips called "The Wandering Age" are often beautiful and tantalizingly ambiguous (this is an especially nice example; I love the final panel), but are hard to take seriously when they star a character who carries around a cardboard tube (it's a long story, but the book explains it if one is curious).

However you approach the storytelling, Krahulik's art is certainly worth paying attention to, with its cartoony expressiveness and sumptuous color, and one of the best sections here is a chapter in which he details the evolution of his art style, pointing out key moments in which he made a leap forward or began using new techniques.  It's fascinating for art-process junkies, and a good little lesson in the steps an artist should take to effectively communicate their ideas.  But most of all, it's a wonderful portrait of an artist striving to continually improve his work, never sitting still or becoming complacent with his output, always keeping his eyes on the next milestone, the next step up the ladder of skill.

That's probably what makes Penny Arcade such an interesting and entertaining source of internet content.  After over a decade of existence, Holkins and Krahulik refuse to rest on their laurels.  They're still looking at what else they can come up with, what products they can release, what new areas they can expand into, how they can improve their art.  They provide a guaranteed good time, and while much of their content is freely available, fans will definitely want to experience this well-designed look at their past, present, and future.
Posted by Unknown at 8:13 PM