This past weekend, the first annual Chicago Comics and Entertainment Expo took place, and it was a hell of a time, exactly the sort of good time a mainstream comics convention should be, if you ask me.  The obvious comparison is the Wizard-branded Chicago Comic-Con (a.k.a Wizard World Chicago), but as was made clear last summer, that show's increasing irrelevance barely makes it worthy of consideration.  The non-comics-oriented, celebrity-focused swap meet atmosphere of that con was absent here, replaced by a well-laid-out show floor that was brightly lit by walls of windows looking out over downtown Chicago.  The time of year is a good choice as well, coming after the bitter cold of the Midwest winter but prior to the suffocating heat and humidity of the summer, hitting the sweet spot for seasonal weather.  Professional attendance was good, with almost all the major publishers putting together booths to show off their wares and talent.  Marvel and DC had their usual city-block-size emporiums, dominated by multi-story banners and featuring monitors blaring advertisements for their current movies, TV shows, video games, cartoons, etc.  DC's area seemed more creator-focused, with tables that were constantly manned by some of their top writers and artists, fans queued up to get a few precious moments with their heroes.  Marvel's area seemed more carnival-like, centered around a stage that regularly featured somebody barking into a microphone and excited crowds gathered around, an obnoxious scene that drove away any attempts at investigation into whether they also had much in the way of a creator presence.  Amusingly, they also had some stations demonstrating digital comics, manned by two booth babes as a way to convince someone, anyone to take a look.

Of the publishers that were not backed by major entertainment companies, most everyone else on the mainstream end of things had a presence, with Oni Press, Image, Dark Horse, Avatar, Boom! Studios, Archaia, and Top Shelf hawking their wares and creators happily greeting fans.  Archaia's booth had an especially nice setup, with the booth flanked by two sets of comfortable chairs arranged around coffee tables, atop which sat volumes of the publisher's comics, an encouragement to stop, rest, and peruse their work. 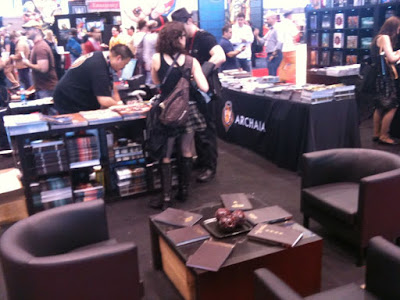 One nice feature of the exhibitor/publisher section of the floor was a section that seemed dedicated to webcomics.  Several short rows of booths saw one webcomics talent after another, from the likes of PVP's Scott Kurtz and Girls With Slingshots' Danielle Corsetto; to a large Topatoco booth full of talent like John Campbell, David Malki, and Jeph Jacques; a rival booth from Zuda featuring Kevin Colden, Daniel Govar, and Bob Timony; and enough other people to keep those whose comics reading mostly happens online busy for most of the weekend.  Oddly, there was a sort of rival section in a different part of the floor that billed itself "Indie Island", giving itself a sort of tropical theme via a large faux palm tree.  Finder's Carla Speed McNeil and Templar, Arizona's Spike were located here, along with some others, and Spike complained that it was a slow weekend, which might have been due to the booth being overshadowed by the adjacent DC area and located in an odd, non-intuitive part of the floor.  If they return next year, they should try to be situated closer to that webcomics section, where they would be a much better fit. 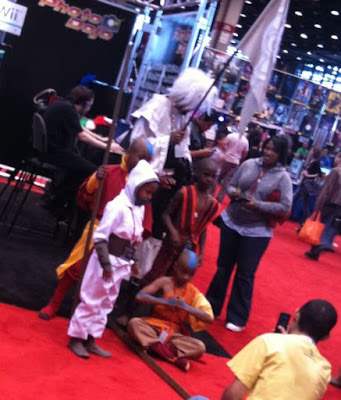 Above: Some kids cosplaying Avatar: The Last Airbender

The artist alley section of the floor was another area in which to spend copious amounts of time, featuring a pretty amazing lineup of talent from the center of the mainstream to, well, the less-mainstream.  It's always enjoyable to wander down those aisles, looking at prints and original art and chatting up the professionals who create your favorite comics, and there was no dearth of talent here, whether you were looking for the guys who draw Batman and Spider-Man, creators of the non-superhero mainstream-ish fare of Vertigo, Wildstorm, Dark Horse, and the like, or even a few artists from a bit farther outside the center of the Direct Market.  Whatever the case, you're probably unlikely to find as many comics people to meet without making the trek to San Diego, and this is definitely the best group Chicago has had in years. 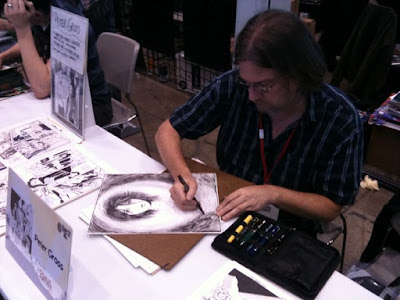 Perhaps best of all, at least regarding the setup of the convention floor, the celebrity/movie/wrestling/non-comics factor was minimized.  Sure, there were places where one could meet washed up actors, get their picture taken sitting in the Batmobile, or bid on props from the Iron Man movies, but those seems pushed off to the side or shuffled to the back of the convention hall, with comics being front and center in everyone's view, as they should be.  The dealer section is sort of a different story, with sword and apparel merchants mixed in with booths crammed full of stacks of longboxes, but anyone who ventures into that section of a con knows what to expect. 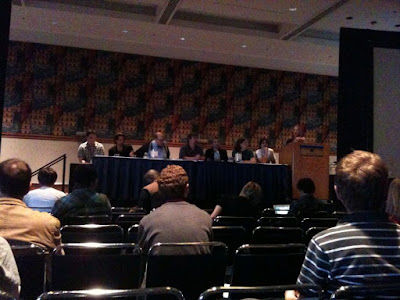 While the main show floor was almost too much to comprehend with everything there was to see, other content was available in the various rooms and theaters surrounding it, with dozens of panels, screenings, and even a few concerts and "performances" taking place.  One could conceivable spend a fulfilling weekend just sitting in these rooms, listening to announcements and discussions, asking questions, and receiving giveaway swag, without even venturing into the main convention.  In short, it was a pretty amazing weekend, with a wealth of activity, sights to see, things to buy, people to meet, and comics to enthuse about.  Barring a more specific show that limits its focus to something like small press comics or manga, this looks to be the best comics convention that Chicago is going to have, and hopefully, it will get even better in future years.  A weekend like this can be tiring, but such "hardship" is worthwhile when it brings an enthusiasm toward comics with it.  Here's hoping for a great sequel in 2011. 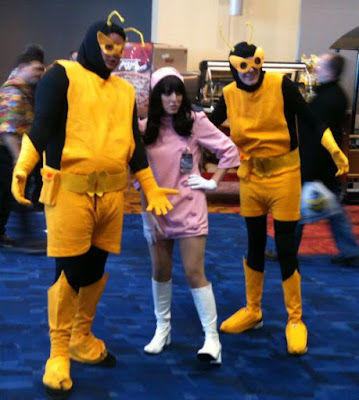 Above: Dr. Girlfriend and some minions menace the costume contest


You can see more pictures on my Facebook page (even if you don't have a Facebook account) here.  More to come, including panel reports, swag, and reviews of purchases.  Stay tuned!
Posted by Unknown at 4:18 PM