As with any convention, there was a mind-boggling amount of products which could be purchased.  Here's the haul that I ended up bringing home: 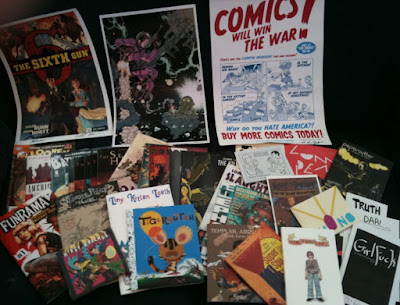 The top row includes a promotional poster for Cullen Bunn and Brian Hurtt's supernatural Western series The 6th Gun, coming out soon from Oni Press, a sweet print by artist Chris Burnham, and a print from Fred Van Lente and Ryan Dunlavey's series Comic Book Comics.  Just underneath those are a bunch of free giveaway comics from DC and Archaia.  In the bottom left is Ryan Kelly's Funrama Presents: The Mutant Punks, Jeremy Bastian's Cursed Pirate Girl #3, a CD from the band Kirby Krackle (with a cover by Jim Mahfood!), and Tiny Kitten Teeth and Tigerbuttah by Becky Driestadt.  Below the "Comics Will Win the War!" print, you can see two issues of Raina Telgemeier's minicomic Outreach, a local alt-weekly newspaper called Lumpen that features an interesting comics section, Tugboat Press's Papercutter #12 (purchased from Nate Powell), a  fanzine/doujinshi by Dave Roman called Ron Weasley and the Bloody Brilliant Day, Jon "Pictures for Sad Children" Campbell's minicomic Oh No, sampler minicomics from the webcomics Nedroid and DAR, the new fourth volume of Templar, Arizona by Spike, Matt Kindt's new release Super Spy: The Lost Dossiers, Lucy Knisley's new book Make Yourself Happy, and Erika Moen's minicomic Girlfuck.  If all goes well, most of these will soon be reviewed here.
And here's a bunch of promotional material and giveaway shit that I received: 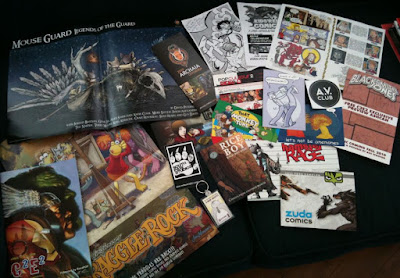 Of these, the items to point out include the poster for Mouse Guard: Legends of the Guard, the upcoming anthology miniseries that features a bunch of other creators contributing stories to David Petersen's epic series.  That looks like it will be amazing.  There's also the poster for Archaia's Fraggle Rock series, which will be illustrated by Katie Cook and Jeffrey Brown, among others.

Of the other items, I'll also highlight the flyer for the webcomic Brat-halla, which appears to be an amusing take on Norse mythology that casts several of the gods as kids in the others' care.  I haven't read enough to render any conclusive judgment, but the art is fairly appealing, and it seems pretty cute.  Check it out, if you like.

And I also wanted to point out an animated short film called The Lift, which featured some mighty impressive animation that was all done by one person.  The plot sounds like a riff on the sort of "old woman curses somebody for wronging her" story of which the movie Drag Me to Hell is probably the most recent prominent example.  Neat stuff, and possibly a talent to watch.

I only managed to pick up a small sample of what was available; there was plenty more to see and buy at the con, and if I had the money to spend, I certainly would have found ways to spend it.  Ah well, there's always next year.
Posted by Unknown at 7:55 PM