Northlanders: Even Vertigo can do pretty colors

There probably isn't much to say about this third volume of Brian Wood's Viking series that hadn't been said about the previous books, but it's another good collection of stories, this time sticking with small, one- or two-part stories rather than longer epics.  But the focus is still on the humanity of these oft-mythologized cultures, looking at their daily lives and concerns of survival as much as blood and violence.  Danijel Zezelj illustrates one tale that focuses on women, who often get overlooked in all the macho sacking and looting, although they do get to participate in some bloodletting for once.  Davide Gianfelice's return to Sven, the main character from the series' first arc, is a nice follow-up to that story, full of nicely splattered blood and forbidding landscapes.  And the Vasilis Lolos-drawn "The Viking Art of Single Combat" is still one of the best stories in the series history (see this earlier post for a more descriptive review).  But the standout here might be the two-part recounting of the sack of Lindisfarne, which gets sumptuously brought to life by Dean Ormston, who did his own colors, bringing lush, painterly hues to the scenes of an abused boy longing for Vikings to come and take him away from the harsh acceptance of suffering that the Christian religion encourages.  Ormston overpowers the senses with huge splash pages depicting the kid's memories of his dead mother: 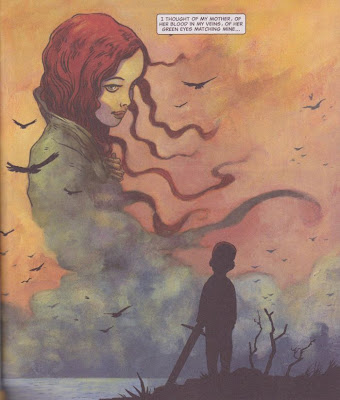 Or his imagination's image of the mightiness and power of the Norse gods: 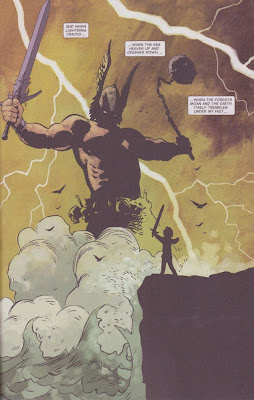 And the violence and slaughter of the inevitable attack don't suffer in comparison either: 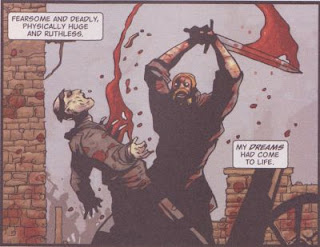 It's pretty beautiful, and quite emotionally powerful; the sort of thing this series can do really well.  I'm still happy to see Brian Wood stretching beyond his comfort level, and succeeding beyond all expectations with his well-researched, emotionally-realistic stories.  I hope it continues for a long time to come.
Posted by Unknown at 8:23 PM