Check this out: Connor Willumsen is posting his graphic-novel-in-progress, Everett, on his site as a webcomic.  I got a glimpse of this at MoCCA last year, and those first ten pages or so still blow me away.  I can't wait to see what he's got coming up.

This volume of Tezuka's "awesome surgeon" comic sees more along the same lines as the previous installments, and there are certainly some good stories, including return appearances by the proto-Kevorkian Dr. Kiriko (first planning to kill his own father, then later himself), the blind acupuncturist Biwamaru (he and BJ both go to one of those hermit-craftsmen to get their sharp implements forged), and the Black Queen, a female surgeon who can't quite manage to maintain our hero's aloof nature and devotion to medical excellence, perhaps due to all those pesky mood swings that women are prone to (women's lib apparently wasn't in full effect in 70s Japan).  There's an example of how dark Tezuka could be with a story of a "wolf girl" living in Communist Russia, and an especially weird story in which Black Jack operates on a ghost.  That's all well and good, but by this point, it's hard to find something unique to talk about with each new volume.  The stories are as good as ever, but it's a consistent level of goodness, so any commentary from the previous volumes would just be repeated.  So rather than reiterate previous praise for Tezuka's storytelling skills, I'll just point out a couple techniques that he uses that impress me.

For one, there's the anatomical cutaway.  Since there are often strange medical conditions that need to be explained to the reader, Tezuka will spend a page or two having Black Jack (or a disembodied narrator, which could be interpreted as Tezuka himself) describe whatever is going on with the patient, accompanied by an illustration: 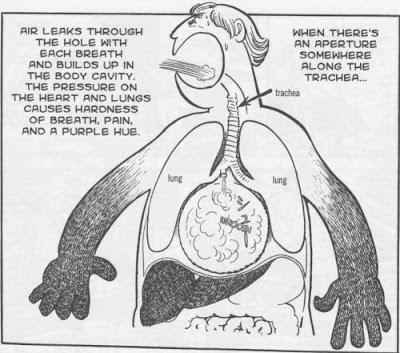 But this being Tezuka, his cutaway illustrations are never dry diagrams, but rather cartoony bits of expressiveness, with the abstracted "model" often reacting in pain or disbelief to whatever is wrong with him: 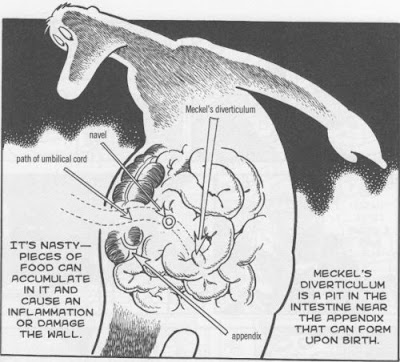 As with everything he did, it's another chance for Tezuka to express himself and do something unique and unexpected in his stories.

I also like the simple, effective design of the main character.  The black cloak that he wears makes for a wonderful visual, often blowing around him dramatically as he makes a bold statement, observes some tragedy, confronts an opponent, or strikes some other dramatic pose: 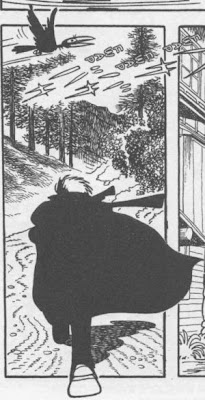 It also makes for an excellent bit of iconography on which to end stories; the sight of Black Jack walking off into the sunset, having completed whatever monumental task was set before him this time, is often little more than a somewhat abstract black shape: 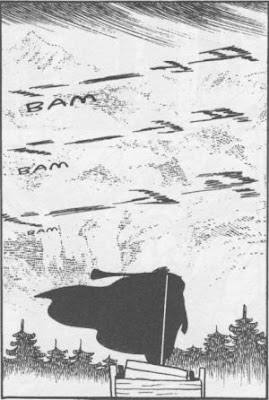 But with the readers having grown familiar with the sight, it's something recognizable and effective, a good bit of punctuation on which to end.

Finally, there's the occasional expressive flourish that Tezuka was so good at throwing into his stories, often to illustrate some emotional state or other.  He was always stretching himself to come up with new ways of depicting mental states, and one in particular is probably my favorite image in this volume, and one that caught the attention of the designer, since it ends up on both the back cover and the spine of this edition.  It's in a story about an actress/singer who was paralyzed in a car accident, and while Black Jack manages to operate on her spine and heal her, she still doesn't seem to be able to move:

It turns out that she was suicidal, feeling trapped in a demanding life of celebrity and exhausted by the constant demands heaped upon her by her fans and bosses.  That bit of information is what makes the image so striking; she's not just physically paralyzed, but emotionally as well, held down into a life that she doesn't want and unable to escape.  That distortion of her body and the "bonds" holding her down emphasize that, but the solid black of her image and her face make the oppression clear, and the shapes in the background suggest that it feels like something that is affecting her at a basic, cellular level.  It's a portrait of tragedy, and Tezuka sums it up incredibly effectively in this single image.

And that's what makes this series work so well: Tezuka's inventiveness and willingness to try anything.  The episodic structure gives him free reign to go in any direction he wishes, and if there's anything Tezuka wasn't afraid of, it was the blank page.  His stories might seem somewhat simplistic, but on closer look, there's plenty to get out of them, and each person will probably come away with something different.  Luckily, he produced so much content, we'll never run out of material to interpret.
----- 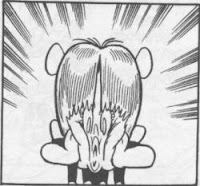 These always crack me up.
Posted by Unknown at 12:00 PM