Hero Tomorrow: Why not today?

Here's something I never knew existed: Tim Callahan posted a Frank Miller-illustrated New Gods story from Walt Simonson's run on Orion.  I'm rarely all that interested in follow-ups to that milieu by people other than Jack Kirby, but this is pretty cool, combining Kirby's bombast with the clipped, hard-boiled Miller style.  Maybe I should give Simonson's stuff a try sometime...

Webcomics links: John Kerschbaum has a new comic on Act-I-Vate called Cartoon Boy.  Sure to be funny.

Gabrielle Bell has been posting her autobiographical Lucky strips online for a while, but I wanted to point out the story that she is currently serializing which started out with her talking about attempting to adapt Valerie Solanas' SCUM Manifesto to comics but has led to a story from her mom about how her friendship with Solanas led to a bizarre pot-selling incident in Japan.  It's pretty crazy and fascinating; check it out. 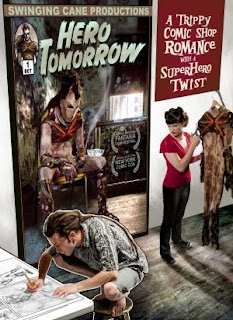 Apparently, the superhero has penetrated the modern psyche to the point that even indie movies about supposedly lovable losers can be all about the costumed freaks who wander around beating people up.  This particular example is an especially acerbic take on the genre, the Watchmen (in terms of cynicism towards the genre, if not innovative structure, compelling characters, or impressive visuals) of low-budget superhero movies.  It seems pointedly self-aware, with its main character being a wannabe comics artist named David with a girlfriend who works in a comics shop.  In a non-shocking twist, he starts dressing up as his own character, Apama (a terribly-designed mystery man supposedly derived from Native American mythology, although his creator states that he doesn't really care about specific tribes or anything), and fighting the lamest of crimes (pumpkin-smashing, candy-stealing teens, those dastards!), when he's not just wandering around the woods striking poses or hiding in bushes and peeping at women in their underwear.  And he's not any more inspiring out of his costume either, sleepwalking his way through a landscaping job for a friend and crashing in that same friend's basement, then mooching their food and spending all his money on comics.  He's a total loser, and not one of the lovable variety; it's hard to see what his girlfriend sees in him, although a late-film twist might reveal something along those lines.  It seems like pretty misanthropic stuff, although it's hard to tell if this is the filmmakers' intent, since everything is filmed with a light enough touch that it might all be intended as comedy and goofy fun-times.

To make matters worse, that intent toward comedy doesn't often pay off; while the situations seem as though they should be amusing in their pathetic-ness, there aren't many laughs to be had.  It's mostly a wallow in ugliness, from the horrific gray-brown, mohawked costume, to David's ridiculous dreadlocks, to his fairly poor, unfinished artwork.  Luckily, there are flashes of brilliance here and there, as in a dinnertime conversation between David and his girlfriend's mom, who asks reasonable questions about the origins of his poorly-defined character and gets screamed at by her daughter for caring.  And the highlight is probably a lengthy dream sequence in which David imagines attending some sort of play in which a squid leaves the ocean, begins living life in the city, and promptly gets beat up by Apama for no reason.  It's weird and surreal, with some impressively expressive puppeteering on the squid and rhyming narration intoned by a Christopher Lee lookalike in a wig.  Definitely the highlight of the film.

A certain degree of latitude must be given to low-budget productions like this; on some level, it's impressive just that they got made and are at all watchable.  In that respect, this film certainly succeeds, and even manages to shine here and there, but compared to the kind of storytelling available in many other mediums, especially the comics from which it seems to take inspiration, it comes up short.  Interestingly, while several scenes take place in a comics shop, the only actual comics mentioned (apart from David trying to pitch Apama to a publisher as "the next Wolverine") are Frankenstein Mobster and Astro City, and an on-screen appearance by Hip Flask.  Not exactly the cream of the superhero crop there, or even titles or characters which most people will recognize.  If the filmmakers were aware of much beyond the most basic of superhero tropes, they don't really make that apparent in the film itself.  They might have come up with a somewhat interesting take on the dysfunction necessary to dress up in a costume and thwart evil, but they didn't really succeed at crafting an especially good film around the idea.  Maybe next time.
-----

If you're still interested in the film (and considering that it has received acclaim at various film festivals, you probably shouldn't take my word for it), the official site can be found here.
Posted by Unknown at 9:04 PM