Since it's bee a little while since I've done a straight review post, there's lots of links to clear out of the queue:

Elsewhere: At Comics Bulletin, I reviewed World War Hulks: Hulked-Out Heroes #1 and  Firestar #1. Since then, Marvel has decided to no longer send pre-release PDFs of their comics to review sites (it's a long story, which I'm sure Bleeding Cool or somebody has already covered), so that may well be the end of my writing for that site.  Probably not a big loss for them, but now I can concentrate on not writing for my own blog instead.

I also wrote about some episodes of Fringe and the movie Black Dynamite at The Factual Opinion, so I guess I won't be limited to this corner of the internet.

Webcomics links: Hey, the latest installment of MySpace Dark Horse Presents has a pretty great little superheroine story by Jaime Hernandez, along the lines of his recent stuff in Love and Rockets.  There's also a creepy body horror story by Simon Spurrier and Christopher Mitten, and "Englourioues Mask-Tards!!!" by Evan Dorkin and Hilary Barta, which is quite hilarious.  Good times.

In other Xaime news, What Things Do (which is turning into a pretty great repository for previously hard to find short comics by a variety of alt-comix creators) has a 2002 short story of his called "The Ghoul Man", and it's awesome.  I'm also digging Dan Zettwoch's "The Ghost of Dragon Canoe".  Comics!  On the internet!

Other miscellaneous links: Here's what looks like a pretty good comics blog: My Comic Book Crisis, written by a 47-year-old woman who recently discovered comics and dove right in, finding tons of great stuff to read and talking about it entertainingly.  Go, read. 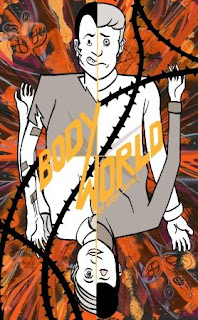 Any review of a Dash Shaw comic probably has to begin by mentioning that he's one of the most exciting talents of his generation of cartoonists, his relentless creativity, his drive to keep making and releasing new work, and any number of other plaudits.  But by this point, he has established himself well enough that reading his name on the cover of a book is enough to evoke all those reactions, allowing one to get down to appreciating the work itself apart from the whole cult of personality.  This is a good thing, because there is always a lot to process and consider in Shaw's comics; he's a fascinating creator, coming up with idea after idea, whether they're plot concepts to hang stories on, or formalistic ways of illustrating those stories through his artwork.   It's exciting to see what he does, and he has such an idiosyncratic touch that one never knows what's coming next.

This latest graphic novel is a collection of a comic that Shaw originally serialized online, and the volume itself is structured to reflect that, with pages oriented vertically and the spine at the top of the page rather than the side, making each double-page spread one long series of panels, as if the reader is scrolling down through the images in a web browser.  There are also fold-out maps in the inside front and back covers, allowing readers to use them like separate windows or tabs to check when necessary.  This is somewhat innovative, but also unnecessary, since it is certainly not essential to know exactly where in the setting of the story the various events are taking place.  Perhaps Shaw felt that he had to keep the geography straight and thought readers would share this feeling, but the regular images indicating map location do little more than distract from the story itself.  It is a bit of a window into Shaw's head though, showing what information takes primacy at certain points as he is relating a tale.

And that tale is an interesting one, following a quartet of characters as they experience a drug that provides empathetically telepathic abilities to its users.  In a near future that is hinted to be somewhat apocalyptic, or at least ravaged and ugly, one Professor Paulie Panther visits the bucolic town of Boney Borough, a sheltered villa free from the depravities of the rest of the world.  He's a researcher into various hallucinogens, and he's there to try smoking a newly-discovered bit of plant life.  His sojourn ends up affecting the lives of two students, dumb jock Billy Bob Borg and big-city dreamer Pearl Peach, and their teacher, Jem Jewel (Shaw certainly has a knack for coming up with goofy names.  Hey, it's the future!).  While there are interesting wrinkles in the story, that's about it; the whole thing mostly involves these four characters bouncing off each other.  As much as Shaw likes to play with neat ideas, he's also good at limiting his stories to small casts, defining his characters well, and exploring their emotional reactions to events as much as the events themselves.

So, it turns out that this plant has the effect of mentally connecting the smoker with whoever is nearby, such that they their thoughts, sensations, memories, emotions, and actions become intertwined.  Paul discovers this slowly, allowing Shaw to come up with some lowbrow comedy as he's figuring it out (the breasts he grows after being near Jewel are one particularly funny touch), as well as spend some time getting to know the other characters.  The whole drug concept gives him plenty of opportunities to experiment, and it's fascinating to see the different ways he depicts the characters getting inside each other's heads and experiencing memories that aren't their own.  He goes all out, superimposing images, swapping characters' positions to indicate how one is feeling another's sensations, mixing up distinctive facial features, overlapping descriptive words in remembered dialogue, and other new ideas on every page.

It's impressive work, but what's even more fascinating than the ideas of how to communicate this sort of information through comics is that the emotions underlying everything feel real, and one can relate to the characters and their lives even as they are going through such fantastical experiences.  The way Pearl sees Paul as an exciting rebel who can take her away from her small-town drudgery, or how she symbolizes a lost love for him are familiar and understandable, a wonderful way to make the crazy drug concepts fit in with everything else.

It's a great combination of emotional realism, science fiction concepts, and experimentation with the language of comics. Shaw is sure to cover all three areas, with new plot and setting ideas popping up regularly, like a game called "Dieball" that combines full-contact athletics with concepts from role-playing games like grid-based movement and a ten-sided die, or making the drug be a plot by aliens to make Earth easier to conquer by erasing humanity's individuality.  And the formal play is fascinating, both in the aforementioned inter-identity hallucinations, but also in ways of depicting emotion and memory.  The use of color is especially noteworthy, with Shaw alternating between flat, solid hues and then bursting into expressive flourishes, with paint splattered and swirled across pages in bold strokes.  It's gorgeous, exciting work that's full of life and energy, tons of fun to read and contemplate.

While Shaw had previously made his name with The Bottomless Belly Button and various short stories, this seems like a real defining work for his career.  He's full of ideas, and he has a drive to create, but he's also fascinated with the way people interact and emote, and he's constantly striving to come up with new ways to depict that part of humanity.  There might be some complaints, such as occasionally shaky figure work, but seeing the way he keeps energetically moving forward, pushing himself to create and get his ideas down on paper, small deficiencies are forgivable, the mark of a bright mind at work, one barely able to contain its contents.  It's a glorious thing to see develop, and with each new work, Shaw makes it clear that he's going to be one of the defining talents of this current golden age of comics.  Whatever is in the pipeline will be exciting to see, but the complexity and richness of his current work will be enough to keep readers occupied until the next career highlight comes along.
Posted by Unknown at 10:54 PM