Pluto: Even a robot can cry. And also blow shit up

Webcomics links: Check out Katie Cook's cute new monster webcomic, Gronk.  Did I mention that it was cute?

For something less cute and more badass, here's a robot action webcomic called Old City Blues, and it looks awesome.

For some essential comics background reading, I want to be sure to highlight this "interview" (really more of an essay) with Joshua Cotter, which confirms my theory that Driven By Lemons was all about mental illness, specifically bipolar disorder.  It's a pretty amazing bit of writing, as Cotter lays his soul bare regarding his insecurities about his work, his uncertainty about future comics, and his own struggles with depression.  If you're at all interested in Cotter's work, this is required reading.

The rule of thumb when it comes to manga is generally that endings can be expected to be weak (and also that series often don't hit their stride until the second volume, but that's less pertinent to this discussion), and that was the fear with this series, that Naoki Urasawa wouldn't be able to bring his story home satisfactorily after such excellence in the series' first two thirds or so.  Those fears should be mitigated by the fact that he was able to wrap the eighteen-volume Monster up well, and Pluto is more of a self-contained work (adapting an already-complete story rather than continuing on as a serialization), but they still lurked, especially after the seventh volume, which was probably the weakest so far.  Of course, that one's faults, as they were, were mostly due to it being the penultimate installment, tasked with putting pieces in place for the final showdown, just barely beginning to answer some of the various ongoing mysteries while still saving the full revelations for the finale.  It wasn't a waste; there was some great action and a growing sense of hopelessness at the oncoming destruction, along with a few really memorable images, like Epsilon wrestling with a tornado, and a creepy-looking adoptive official managing to make himself seem cheerful and kind, only to turn out to be exactly as evil as that first impression indicated.  And best of all, a shot of Epsilon shooting his hands down from out of the sky to offer protection to one of his charges is one of the lasting images from a series that has featured many, many indelible pieces of artwork: 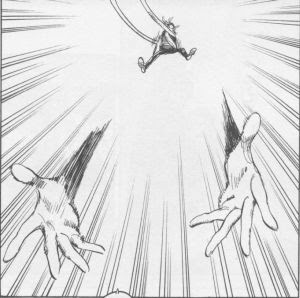 But while that volume was probably an essential bit of pacing and setup, it kind of seemed like stalling before the big finish.  Luckily, the final volume suffers from no such "problems", jumping right into excitement with the awakening of Atom and the subsequent confusion and fear that reigns among Dr. Ochanomizu and his scientific cohorts as they don't know what to expect from him.  Urasawa certainly passes that feeling on to the reader, giving Atom a wide-eyed, inhuman gaze that suggests a struggle to contain boiling internal emotion: 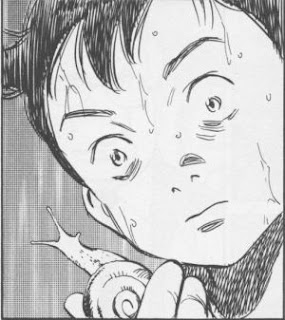 His penchant for scrawling the formula to a deadly bomb all over the walls of his holding cell doesn't help anything either.  But he does eventually get back to normal, just in time to go up against Pluto in a final battle for the fate of the world, with enough time taken in various expositional scenes both before and during the battle to explain exactly what has been going on for the whole series, how Pluto, Sahad, Abullah, Goji, and the mysterious Bora are all related, and what the big, secret plot and string of murders have been all about.  The interesting thing is, it all ends up making sense, but it almost becomes unimportant as the stakes increase, a bit of petty revenge that spirals out of control to threaten all life on Earth.

That's something that Urasawa does so well in this series: explore the basic emotions that humanity experiences, demonstrating how they can affect us in both good and bad ways, but often go unnoticed in the swirling complexity of internal and external stimuli that we all face.  The love for family is the emotion that gets the focus here, turning out to be the main impetus for Abullah's revenge as he sent Pluto to kill everyone even tangentially involved in starting the war that killed his family.  At the same time, we see Atom experiencing Gesicht's memories of starting his own family with his wife after struggling to comprehend the undying love a pair of human parents demonstrated toward a child hostage that he rescued: 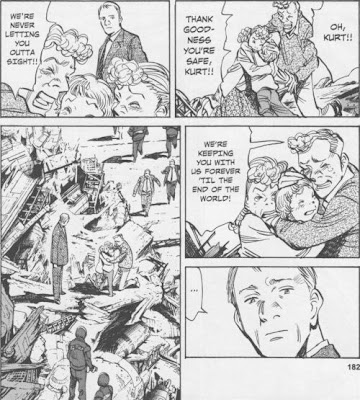 His attempt to experience that kind of love for himself (and his wife) leads him to adopt a broken robot for himself and his wife, and Urasawa manages to capture a childlike love from him as he emulates the humans he observed: 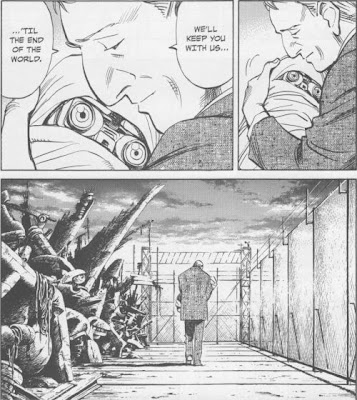 It's moving stuff, reminding us that while we like to think that parents and families have maturity and intelligence, those strong emotions can often make us block out everything else, leading us to take actions that we wouldn't rationally consider in pursuit of protection or anger when our loved ones are threatened.  We're all robots on the inside, I guess.

This sort of examination of humanity is fascinating, but this being the final volume of the series, Urasawa doesn't do too much navel-gazing.  Instead, he closes things out with a bang, pitting Atom and Pluto against each other in a rage-and-hate-fueled battle that's harsh, violent, and destructive, with Atom possibly even coming off as the scarier of the two as he launches into a litany of Pluto's crimes and swears to kill him, anger written across his face as his blasts through the air and begins tearing off robotic body parts: 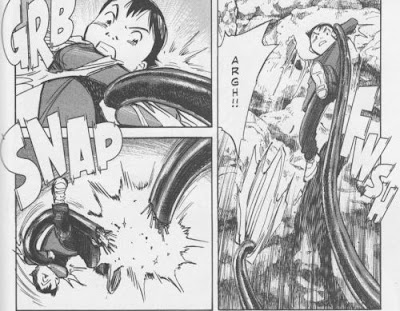 It's an amazing bit of action on Urasawa's part, with Atom successfully transforming from the vulnerable-seeming kid of earlier volumes to the high-flying, superheroic Astro Boy that we know and love, but with a dangerous edge that his sister Uran recognizes from thousands of miles away as something that could destroy his soul if he goes too far (why, he's almost like a certain righteous military superpower performing unspeakable deeds in the pursuit of "justice"!).  The fight might be cathartic, but it's not going to do anybody any good of the world gets destroyed in the process.

In the end, good manages to triumph over evil, as was a certainty from the beginning, but Urasawa makes it count, giving all parties the proper emotional release, and attempting to impart lessons about humanity in the process.  That's what Pluto has been all about, and it's been a fascinating, enlightening bit of fiction, something  to ponder on multiple levels, from the sci-fi ideas to the symbolic commentary on current events, from the excellently-developed characters to the gorgeous artwork that fully defined a complex futuristic world, from the small, emotional moments to the big, exciting action.  It's been a remarkable work of comics throughout, something that we're all lucky to be able to experience.  Now, who's up for translating Billy Bat?
Posted by Unknown at 10:00 PM