One link: I really like this short Wolverine story by Faith Erin Hicks.  It seems funny because of Wolverine complaining about people eating his eggs, but I like the way it demonstrates the small annoyances of living in a house with a bunch of young, obnoxious kids, along with having to fight ninjas everywhere he goes.  I just hope this isn't the story in this week's Girl Comics.  Not because it isn't fit for print, but because that would mean I only get one Hicks story this week instead of two.

Here's some (hopefully) shorter looks at stuff I read recently: 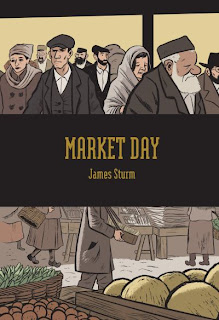 There's a profound sadness to this story of an old-world Jewish rug-maker who is in the process of getting forced out of his artisanal dedication to excellence by the encroaching modernity of mass production and increased trade.  One could read all sorts of commentary on current economics (or those of the past few centuries, probably), but I think it works really well as a character piece, a look at a religious man trying to express himself through his work and being dealt a harsh blow through no fault of his own.  While James Sturm's writing is wonderful, full of realistic interior narration that seems to change its mood along with the coming and going of the light throughout the course of the day the comprises the story, the art is what really works, keeping the characters relatably simplistic but fleshing out their world with lots of background detail.  The colors are especially exquisite, giving a dusty texture to the market and a green placidity to the fields, and the respectively hopeful and gloomy shadows of dawn and dusk lending weight and resonance to the character's plight.  This is a very good comic, if not one that will have readers celebrating the joy of life afterward. 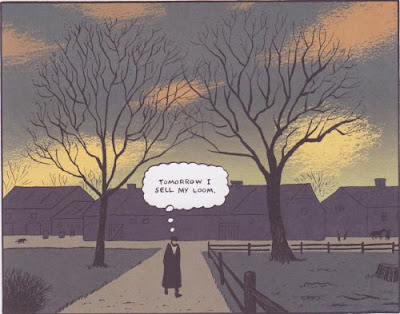 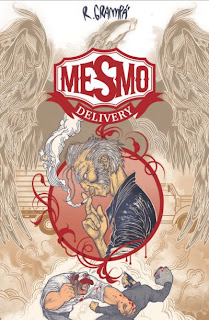 I've described Rafael Grampa as a cross between Geof Darrow and Frank Quitely before, but that's not telling the whole story.  He does have Darrow's exhaustive detail and Quitely's fluid motion, but there's also a bit of Paul Pope's expressively squiggly (yet completely controlled) linework, Anders Nilsen's stippled textures, and probably plenty of other influences.  Grampa has internalized this mixture of styles, however, and made it his own particular brand of comics awesomeness; he's not just aping what seems cool, but instead taking the learned techniques and creating something new and vibrant with them, making for a violent, action-packed story that's seems to transfer the specificity of his vision to the page.  He gets to add some of his own ideas to the fray as well, like the way the lyrics of Elvis' "A Little Less Conversation" swirl and weave their way through a character's dramatic entrance: 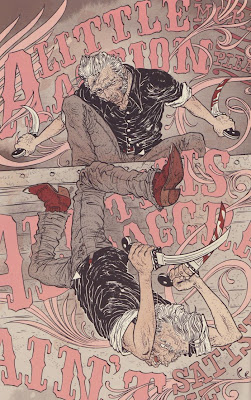 The story? It's about a dumb bruiser of a truck driver and his aging Elvis-impersonator partner stopping at a dive along their journey and getting in a fight with the locals, with some twists and turns along the way, but that all seems beside the point; the book is really about Grampa showing off his chops, crafting memorable depictions of the characters and filling pages with created imagery, from the signs and knick-knacks in the background of the diner to the dusty, deserted landscape surrounding it.  And that action!  Holy moley, one can spend inordinate amounts of time examining the frozen motions of bloody knuckles and flashing knives, the flying bodies and expressions of pain or panic on faces, the blood spurting everywhere.  It's glorious, beautiful stuff, like nothing ever seen before, but hopefully the type of thing we'll be able to witness a great deal more to come.
----- 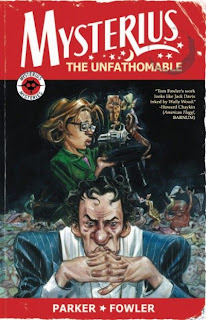 As good a writer of superheroes as Jeff Parker is, it's nice to see him branching out from the mainstream, spandex-clad corner of the comics world and doing something wholly original and creator-owned.  Teamed with Mad artist Tom Fowler, he's come up with something special here, following the adventures of a stage magician who is actually a powerful, immortal sorceror as he deals with a variety of supernatural threats, both to himself and the world at large.  That's a decent enough concept on its own, but Parker doesn't just have him meet a couple ghosts or solve a simple mystery; instead, he comes up with some killer ideas for him to battle, including a druidic cult leader with intentions toward godhood via some analogues to notorious real-life events, and a Dr. Seuss-ian children's book author whose rhymes are actually used to summon demonic creatures.  Those are both pretty great concepts, and Parker uses them to full effect, interweaving the threats as Mysterius and his assistant Delfi, the Dr. Who-style companion who acts as the requisite audience stand-in and sounding board for exposition, bounce between crazier and crazier events, pausing only to manage some character development that only seems slightly tacked on.  Mysterius is a self-centered bastard, but his jerkiness is mostly underplayed, making a somewhat melodramatic confrontation between the two leads at the climax seem a bit out of place, but it's not a dealbreaker in any way, only a slight hiccup on a wonderfully scenic trip.

And yes, the scenery is to die for; Tom Fowler's caricture-style art is expressive and fun, full of characters in motion and panel layouts that get all curvy and crooked when things turn weird, scenes filled out in a way that makes sense spatially even if everything is more cartoony and exaggerated than in the real world.  The characters are beautifully defined, all rounded bodies atop spindly legs, bulging potbellies on the men and big, shapely rear ends on the women.  But the monsters are where he really excels, coming up with some freakishly weird and gross creatures that really do seem like twisted, malevolent versions of the goons that show up in kids' books, if not specifically those of Dr. Seuss.  The coloring, by Dave McCaig, really helps to sell this, giving their hellish dimension a bright, unearthly hue, while also choosing the perfect shade of washed-out grey for a different, more barren circle of hell, and some murderous reds and oranges for the final battle.  It's a really nice-looking book; when Parker is paired with the right artist, he really makes the best of the collaboration, with the two of them bringing out the best in each other.  This is a fun, scary, exciting, ambitious book, and hopefully it's only the first volume in a continuing series, since while one volume is fun, more of these characters and these sorts of stories from Parker and Fowler would be quite welcome.
Posted by Unknown at 9:27 PM