Young Lions: If I said I hated it, I'd be lyin'

Elsewhere: I wrote about the first part of the Fringe season finale over at The Factual Opinion.  Part two, coming up next.

Webcomics links: I thought the latest installment of Gabrielle Bell's Lucky was especially good. I particularly liked this panel,with its dripping shadows of anxiety: 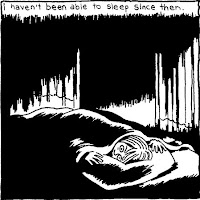 I also thought this strip by Daryl Cunningham about Dr. Andrew Wakefield, the guy behind the anti-vaccination scam of recent years.  His non-fiction, medical-themed comics are always good.

And in a somewhat webcomic-related link, here's the site for Regular People, an animated short film that Colleen Frakes (Woman King, Tragic Relief, etc.) worked on, which you can donate to and receive fabulous rewards, if you like. 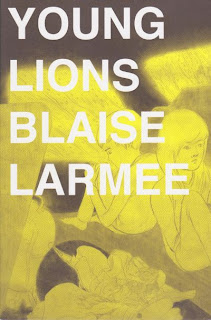 I'm not sure what to make of this book, but I do find it kind of fascinating, and interesting to try to figure out what creator Blaise Larmee is going for.  He seems to be an emerging comics talent, having been awarded the Xeric Grant for this book and maintaining a presence online, but his style is like nothing I've ever seen before, a sort of dreamlike, minimalistic look that doesn't seem to have much of a plot, seeming instead to be an attempt to capture a certain youthful feeling of ennui, a sense of being ready to take over the world, but not knowing what to do with that energy.  It's strange and unintuitive, but certainly pretty to look at.

What plot there is in the book follows a trio of kids who are members of a "conceptual art group", although what this means is never really explained.  One of them idolizes Yoko Ono, and another seems to be the leader, performing seance-like rituals at parties, but they don't seem to be out to accomplish much of anything or gain any recognition.  In fact, the main portion of the book sees them hook up with a fourth "member" and travel with her to spend time in a remote house in a secluded forest, and much of the time they just sit around, wandering through the trees and swimming in a lake.  And that's about all there is to it, with little in the way of development or conflict, but a sense of boredom and uncertainty about the future pervading.

So if plot isn't the draw, it must be the art, right?  That does seem to be the case, although Larmee has a non-showy style that seems to be trying to appear amateurish and half-finished.  It's a deliberately lo-fi approach, with every page looking like it has been photocopied multiple times, erased lines often visible, and the actual linework seeming like incomplete pencil drawings from a sketchbook: 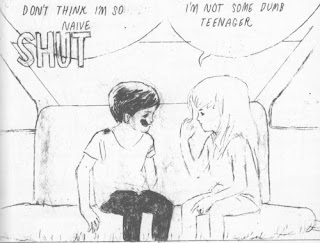 Backgrounds are often nonexistent, leaving the characters stranded in an empty white void, and word balloons, which sometimes indicate a speaker but usually just hang in the air unattributed, fill with hand-lettered words that often flow in strange rhythms that don't always sync up from panel to panel, or just feature the lyrics of music that the characters are listening to/singing along with.  It all seems like a purposeful attempt to look unfinished, reflecting the characters' state of mind, but there's more to it than a bunch of scrawled sketches; the moments of beauty that come through are all the more powerful because of this approach.

That's what's really impressive here; Larmee fills pages with little more than characters lounging around contemplating life, and while most of these images aren't fully rendered, the occasional moment in which a true-to-life gesture or a wisp of tossed hair seems captured from life is breathtaking: 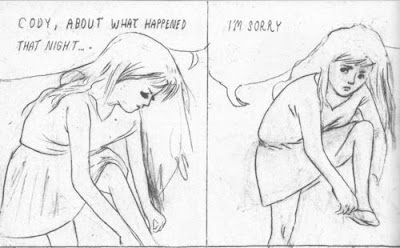 As is the rare panel in which background details get filled in, making for an eye-catching contrast to the minimalistic blankness of the rest of the book: 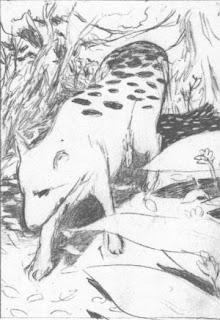 The characters themselves even seem to be the embodiments of this approach; Larmee stylizes them to an extent, giving them heads a bit too large for their bodies, making them look like children even younger than they actually are supposed to be, even drawing "blush" circles on one boy's cheeks like he's a Taiyo Matsumoto character, possibly intending to emphasize the fragility of youth, or maybe just ensuring readers see the characters as younger than themselves, no matter their age.  They don't quite seem real, except for when they suddenly do, making those moments all the more affecting. 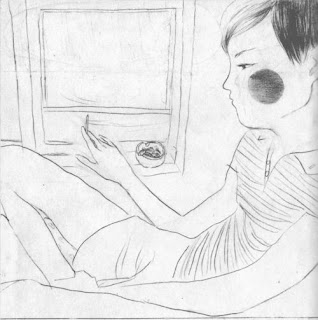 In the end, I'm still not sure about this book, but I'll admit that it is a fascinating one, taking an unusual approach to storytelling (if you can call it that) and art, ending up being something that, if one is in the right frame of mind, can wash over you and leave a certain emotional stamp, a dredged up memory of a feeling of a moment that might or might not have actually taken place.  It's an ethereal experience, but one that doesn't immediately dissipate.  Larmee definitely has something to him, so hopefully this is just the beginning of what he has to offer.
Posted by Unknown at 10:29 PM