Curio Cabinet: Yes, that is a fairly apt title 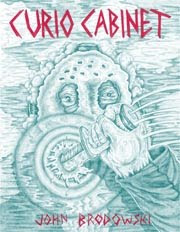 While the indie comics scene was once dominated by whiny autobiographical pieces in which cartoonists bored everyone with their not-very-interesting lives (or so went the stereotype circa 2003), it seems to have been taken over by fantastical inscrutability, perhaps due to the inexplicable acclaim lavished on Gary Panter.  John Brodowski's doesn't necessarily fit into that aesthetic, but judging by this collection of short, mostly wordless pieces, his work has its own strange incomprehensibility, often seeming based on inside jokes or something that makes sense to him and nobody else.  He does have an interesting style, but the reader will probably be left with a sense of confusion rather than be especially entertained.

Most of the stories here seem to present an idea, before veering off into bits of weirdness that might be engaging if they made much sense.  One story sees side-by-side examples of apparent awesomeness, with animals laying down in front of a hunter, ready to be slaughtered, while elsewhere a giant pipe organ opens up to reveal a hooded motorcyclist who races across a series of ramps and comes crashing through a stained-glass window.  The hunter and rider are then revealed to be two nerdy guys sitting at a table (maybe they were telling each other their cool story ideas?); their skin subsequently melts off, and the skeletons high-five each other, sending hand bones scattering.  And that's it.  Huh?  Most of the rest of the book is like that too: a guy spends years making a squirrel suit, eventually leaving his family to live in the wild; a couple is out picnicking when the man is scooped up by a giant wolf-headed bird and dropped off at a cave to fight monsters; a bagpiper plays a tune that causes a dinosaur to rise out of the ocean and melt a nearby army with its roars (and the help of a rock band); a couple 70s guys are cruising down the road when a giant dog's paw reaches in from outside the panels and scoops one of them out of the page entirely; and, in what could be an affecting tale if not for another head-scratching ending, a man spends his entire life working in a mine, aging from page to page, growing older, and forming a family, before wandering off one night with what appear to be plant-like aliens who move around via tank tracks attached to their pots.  Who knows what all this is supposed to mean, if anything at all aside from whatever surreal imagery popped into Brodowski's head.

It is certainly interesting to look at, for the most part, every page full of gray-washed imagery, lumpy, ugly people wandering about and encountering weirdness.  The monster designs are effective, and some of the bits of surreality really stand out alongside the stiffness of the characters, but everyone sports such strange, leering faces, looking like inbred freaks with protruding teeth and heavy brows; it's hard to empathize with the plights of any of these subhuman goofballs.  The only place this has much of any effect at all is in the aforementioned story about the miner; he sports a rictus-like grimace throughout, as if he's in constant pain, which befits an apparent unhappy life slaving away in darkness.  Another fairly effective use of Brodowski's stiff figures appears in the closest thing the book has to a framing sequence, a series of one-page strips bearing the title "Cus Mommy Said So", which see Jason, of the Friday the 13th film series, wandering aimlessly around the forest near the summer camp where he died.  As with the rest of the book, the continuing story has a non-ending, perhaps meant to be a sort of prologue to his first appearance as the villain of the films, but the blankness of his hockey-masked expression makes for a sort of pathos, as if he doesn't understand what to do now that he has been resurrected.

Perhaps I'm making this sound like an awful slog of a read, but that might just be my reaction to its unexplained strangeness.  For readers who enjoy stream-of-consciousness surreality, this is probably the perfect comic.  If that's you, more power to you, but I do prefer to be able to understand what I'm reading rather than just hoping it made sense in the creator's head.  Perhaps Brodowski will deliver something like that someday, but for now I'm calling his work a miss.
Posted by Unknown at 8:34 PM