Other Lives: Damn that newfangled internet!

Other Lives
By Peter Bagge 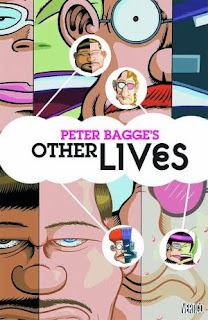 Peter Bagge's comics have an odd energy, delivered at a pitch for which "histrionic" would be too strong a word, but definitely more intense than reality, characters contorting their bodies over-expressively and making sure every feeling of theirs is known to the reader by explaining themselves to a great extent either by talking at length or filling thought balloons with their unspoken opinions about others.  It's a bit of an old-fashioned take on comics storytelling, probably standing out effectively against the wordy comics stories of decades past, but seeming kind of backward looking when compared to the increasing sophistication of the medium's current output.  And that's kind of fitting, considering Bagge's subject matter here, exploring the way the internet has affected people's social lives and personalities, but mostly bungling it by seeming to mistrust newfangled technology and dancing around the issue without saying much of anything.

Bagge does have the germ of a good idea here, but his exploration of it is pretty wrongheaded and unfocused.  The intent seems to be to look at people's perceptions of themselves both online and off, but the theme never coheres, focusing mostly on the character who uses the internet the least and veering off in other dramatic directions.  It doesn't help that none of the characters are at all likeable either, ranging from self-loathing and whiny to sociopathic.  Even if you're used to Bagge's usual hysterical body language, it's not an especially pleasant read.

Of those ugly characters, the main one here is one Vader Ryderbeck (a pseudonym for the too-ethnic Vlad Rostov), a journalist working on an article about the theme of the book, which allows him to introduce the "dual lives" subject but never delve very deeply into it, since Bagge is more interested in his personal life, including his family history, his relationship with his girlfriend, and his guilt about his past.  We never learn what he finds out or how he interprets it, although we do get to see some of it play out among people related to him, including Ivy, the aforementioned girlfriend; Woodrow, a divorced gambling addict who takes Ivy under his wing in "Second World", a fictional version of Second Life; and Javy, a mentally ill mama's boy who fancies himself a terrorist-busting cyber-cop.  None of these people have much in the way of redemptive qualities, with time spent with them making readers want to avoid contact with people online altogether (which might have been Bagge's goal).

Bagge seems to be trying for a more sweeping look at duality of personality, how people perceive themselves even when they disregard what they look like or how successful they are, exploring how assumed online personas can facilitate a blurring between fantasy and reality.  Woodrow and Javy seem to be the most negative looks at this idea, with the former presenting himself as a powerful king and unbeatable gambler online while his real life falls apart and becomes increasingly pathetic, and the latter becoming increasingly paranoid about terrorism and surveillance the more time he spends in virtual places that foster that sort of thinking.  Vader, on the other hand, has problems completely unrelated to the internet, unable to mentally progress beyond the disgust he feels at himself for a former weight problem and guilt over an act of plagiarism, along with a weird sense of entitlement that was taught to him by his grandfather, who was an aristocrat in pre-Communist Russia.  As for Ivy, she doesn't get much of a personality beyond being led around by either Vader or Woodrow, tagging along with the latter in Second World and waiting anxiously for Vader to get over his personal issues and marry her.  Unfortunately, Bagge seems most interested in Vader, exploring his emotional problems and issues with his father, which is interesting enough, but just distracts from the main theme.  There might be something there about people reinventing themselves and keeping secrets from others about parts of their lives they don't want to share, but it's just not integrated very well with everything else.

For anybody who has read a Bagge comic previously, his art should be familiar, with the usual noodle-limbed, gaping-mouthed expressiveness, every character slouched over and contorted into frantic emotion no matter the situation.  It works for the tone of the story, whether or not one agrees that said tone is the best choice.  There is a slight departure in scenes that take place in Second World, with the expressiveness dialed down to reflect the stiffness of CGI avatars, mouths usually remaining closed, and angles seeming a little less rounded (people even have elbows!).  In Bagge-world, it's about as cold and impersonal as things are going to get.

It's certainly not a perfect book, but fans of Bagge might enjoy it just for the chance to see his inimitable style. It's got plenty of problems though, and could have stood to be rewritten at the script stage, tightening up the plot, making the themes cohere a bit better, and maybe doing some more research on the subject rather than just proceeding from speculation.  If anything, it should make for an interesting relic of this particular moment in time (or really, that of about five years ago), when concerns about how the internet was changing society ran rampant.  That sort of frightened pontification already seems to be a thing of the past, as does the cultural cachet of virtual worlds like Second Life, now that everyone from middle-schoolers to grandparents maintain a presence on Facebook and Twitter.  A fascinating exploration of this subject could be made, but this certainly isn't it.
Posted by Unknown at 10:36 PM