I still can't draw, but I can apparently trace

Here's an interesting project: Images Degrading Forever.  It's by Robin Blanchard, who, prompted by Matt Seneca of Death to the Universe (another interesting blog that I'll have to start reading), has posted five images from Dave Sim's Glamourpuss (Blanchard was featured in the 12th issue of the series), encouraging anybody and everybody to download and ink them, then send him the results.  He'll take the images people send and replace the originals with them, continuing to do so over and over, with the intent of making them, well, degrade forever.  I liked the idea, so I gave it a try with a drawing app on my Iphone, and here's the result: 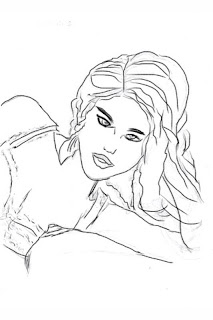 There, now anybody who wants to try it has to draw over me!  This is a cool idea and a fun project, so I encourage anybody reading to give it a try.  Art!
Posted by Unknown at 4:30 PM