Super Spy: The Lost Dossiers: Now found, along with various other material 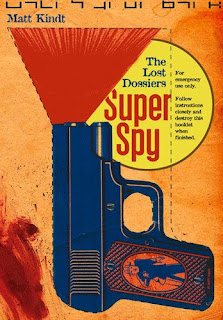 While this book might be billed as the second volume of a series, it's really more of a "DVD extras" bit of supplemental material, but for any fan of Matt Kindt's excellent graphic novel, it's essential reading, providing a glimpse at a few "deleted scenes", a bit of "making of" material, and some unrelated material (sketches inspired by movies, a story about a troupe of circus freaks) that might be unrelated to the espionage theme but still gives readers a chance to experience more of Kindt's similarly-styled work.  It's a slim volume, befitting its  status as a collection of odds and ends, but a fascinating one for those so inclined to experience it.

What's especially remarkable here is that Kindt's ability to craft compelling, realistic spy stories while weaving emotional threads into them and examining the human cost of a life dedicated to lies and murder remains even in such small doses.  A brief strip about a woman training to be a spy while planning to leave her husband is devastating, as is a brutally harsh tale involving a woman posing as a prostitute and helping a colleague make a prudent, but terrible decision.  A short story consisting only of seven panels (each covering one day of a week) sees a third woman use sex and trickery to help her side rain death down upon the other.  It's the same awful, affecting material Kindt covered so well in the original book, only a small example of what he is capable of, but no less impactful for its short length.

And in addition to the great storytelling on display here, Kindt's willingness to experiment and find new ways of telling stories using the comics form shines as well.  The aforementioned "seven days" story uses stereoscopic 3-D imagery, one tale is presented as an illustrated journal, the "carnival freaks" story is presented as a series of illustrations with text pieces written from the perspectives of each of the different characters, and Kindt even encourages readers to cut up the pages of one story in order to arrange them in the correct order for reading, along with fashioning a sort of pop-out comic using the image of a gun on the covers.  It's fun to read, even among all the emotional devastation.

This might be a sort of victory lap for Kindt, but he's earned it through dedication to his subject and pouring his soul into his characters, while still coming up with fun, fresh ideas about how to tell stories without sacrificing good storytelling and compelling characters.  If you're not already a Kindt fan, this book might not be strictly necessary, but it's required reading for those who were blown away by its predecessor, and it provides a great deal of anticipation for the many projects of Kindt's that are soon to come down the line.
Posted by Unknown at 8:03 PM