It Was the War of the Trenches: War is hell, etc.

Elsewhere: I wrote about The Imaginarium of Doctor Parnassus at The Factual Opinion.  I liked that one.

Links: A new Abhay Khosla comic!  I guess he did this as a minicomic to sell at a local convention, but he also posted it online, and it's as hilarious as you would expect.

Here's a pretty amusing webcomic: God Hates Astronauts.  Be sure to read from the beginning; it's a superhero parody, but while it starts out as a "ha ha, this is lame" sort of thing, with dumb names and powers and bears and such nonsense, it quickly changes into something weirder and funnier.  You'll see what I mean.

It Was the War of the Trenches
By Jacques Tardi 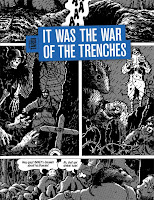 It has been said that it is impossible to make an anti-war movie, since the depiction of war onscreen necessarily conveys such an excitement and intensity that even death can seem entertaining.  That notion is debatable, but the same statement can be disproven for the medium of comics on the basis of one piece of evidence: Jacques Tardi's World War I graphic novel It Was the War of the Trenches.  By focusing on the sense of ever-present death and complete inability to survive through any means other than sheer luck, Tardi completely dispels any sense that war is heroic, or even a worthwhile endeavor.  It's a harsh, ugly look at the depths to which man can sink, with little in the way of redemption throughout.  It's persuasive enough that it renders most any other argument against war unnecessary.

The book collects a series of stories that were published in French magazines over the course of most of the 1980s and early 90s, making for a series of unconnected vignettes following the cannon fodder soldiers who dwelt in the trenches on the front lines of the war between France and Germany.  Tardi pulls no punches here, showing their grim, ugly existence, as they dwell in the mud and rain, subsisting on stale rations before periodically leaving their only relatively protected shelters for ventures into the barbed-wire-and-bullet-filled "No Man's Land", often dying horribly.  Each tale only lasts a few pages, as Tardi follows one soldier or another until their story, more often than not, reaches a bitter end, but he makes good use of the space each man gets, allowing them to narrate about themselves via captions or dialogue, making each individual seem fully realized and human, and all the more tragic when they are inevitably slaughtered. 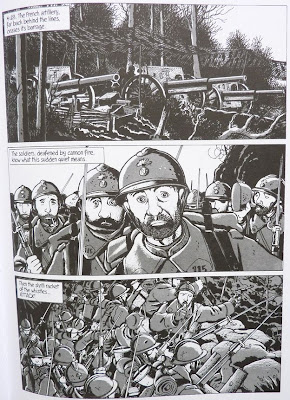 This might seem like an endurance test, a litany of death upon death, but Tardi does vary his approach enough that each new tale is unique, presenting a fairly encompassing view of soldiers' experiences, although never venturing above the lower-most link on the chain of command.  Some men get a chance to leave the front lines and glimpse a life of normalcy before being sent back into the meat grinder; others get stranded in the crater-pocked wilderness and try to survive on their own; still others find themselves in bombed-out towns searching for food and safety.  We might get to see somebody's personal history or flash to their loved ones before the worst happens, usually quickly.  Or, somebody might get wounded and end up suffering horribly as they slowly die, alone in a muddy pile of fellow corpses.  The stories are fiction, but they are based in heavily-researched fact, and that much is obvious in every nasty detail that Tardi includes on the page. 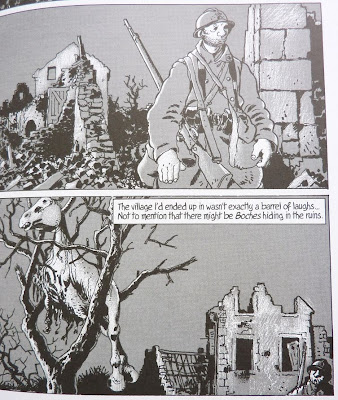 No, reading this book is not an especially enjoyable experience, but it is a necessary one, an attempt to convey the way war cheapens human life, turning men into disposable objects, bullets to be fired at the enemy with no regard for their own right to existence.  There's a certain contempt on display for those who are in power and treat their men with such disregard, a disgust that the reader shares when the French officers order their artillery to fire on their own lines in order to force the men out of the trenches to attack the German lines, or, in a sequence lifted from the Stanley Kubrick film Paths of Glory, soldiers get sentenced to death for retreating from an impossible assault when ordered to take a German position.  One can't help but be horrified at the ugliness to which men will sink, whether they are fighting for their lives in the mud or giving orders from well behind the lines.

The book ends with a character giving a lengthy monologue that acknowledges all the various factions and nations involved in the war, displaying a sort of sorrow for all the people dragged into a pointless conflict, yet still containing a bit of dark humor at the circumstances that brought them all together.  He also rattles off some staggering statistics about the number of people killed and maimed, the amount of land and resources destroyed, giving a full picture of the damage that war can do.  It's a change from the intimacy of the rest of the book, a chance to zoom out and see the full effect beyond what is experienced by individuals, and it makes for a great bit of punctuation to end this slog through the depths of human ugliness. 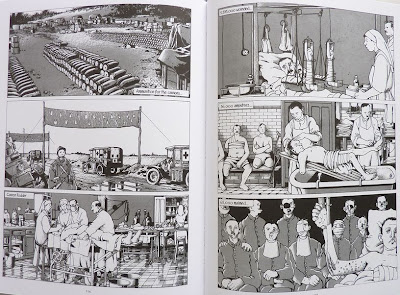 Yes, this is an unpleasant book (even extending to the art, which does its job as well as everything else in making the war look ugly, muddy, dirty, and bloody; defining each character well but making sure to show the awfulness of their circumstances), but one that everyone should read, not only for a sense of history, but to see the horror of death and the suffering of those forced to partake in it.  The idea that people would be less likely to engage in war if they witness its effects is something of a pipe dream, but it certainly wouldn't hurt to open people's eyes to it.
Posted by Unknown at 1:29 PM