More proof that I am a nerd, of some sort or another

In yesterday's review of Super Spy: The Lost Dossiers, I mentioned a comic that required the reader to cut up the pages and rearrange the panels in order to be read, but I managed to cheat a bit, just to see what it looked like to actually do so.  I made copies of the relevant pages and cut those up, laying them out in the indicated pattern, with the following results: 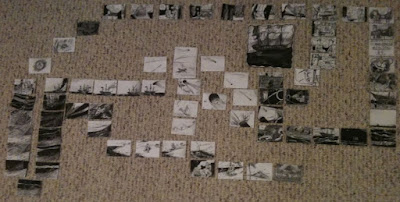 There it is, all laid out on my basement carpet, and while it's not readable in this image, there are at least a few notable details, if you care to look.  It's fascinating to figure out which direction the story should be read in, with the action moving up, down, left, right, and diagonally, criss-crossing throughout the whole layout to make a grand whole.  It's a crazy, innovative use of space, with panels in the middle tracking cannonballs through their trajectories, stretching time out into tiny increments, while taking huge leaps through the years at the edges (note the family tree segueway in the far right column). The story involves a shipwreck, which, while taking place in the past, manages to lay a foundation for the short spy story that takes up the top row of the layout.  This makes for an interesting visual cue, with the history of the events lurking under the surface and forming a foundation for it.  Hell, even the layout itself vaguely resembles an upside-down ship.  It's an ambitious example of non-traditional comics storytelling, and while the story is pretty slight, it's as exciting for the possibilities it indicates as for the brief bits of action and violence it contains.  Let's hope Kindt continues to push the limits of comics storytelling in this manner, because it's tons of fun to experience.
-----

While I was scanning stuff and goofing around with imagery, I made this animated version of one of the 3-D images from the book.  Enjoy, and try not to get dizzy: