Elsewhere: I don't think I've linked to this yet: I reacted with revulsion to the season premiere of True Beauty, which means I might or might not keep watching. That's summer TV for you.

Links:  Ed Piskor is posting the entirety of his Wizzywig series of graphic novels webcomic-style, with a page every few days.  I've been wanting to read this one.

This series of autobiographical 3-D comic strips (sort of) by Warren Craghead looks really cool.  I see another "look what Matt made!" post in the future.

Since Joe Kubert has been making comics longer than most of his readers have probably been alive, he gets a bit of leeway when considering the quality of his work.  Not to say that outright badness is excused, but some general clunkiness can go ignored, especially when there are so many frankly incredible examples of excellent artwork and storytelling on display.  The fact that he's working at all in his mid-eighties is already astonishing, and the level of craft in his art and dedication he shows in continuing to crank it out regularly is pretty amazing.

That said, this book is kind of an odd one, presenting a fictionalized account of an early battle in the Vietnam War that is nevertheless based closely on fact, which we know because a sort of reference dossier is included in the back of the book relating the real-life incidents as described by the men who experienced them.  But while Kubert changes names and probably fudges some details, he doesn't really make a great deal of effort to restructure things into a plot; instead, the whole story is little more than a series of events, described via narration and captioned dialogue.  The characters don't get reshaped into anything more than a series of interchangeable grunts either; they simply go through their paces like action figures, only slightly more momorable than the near-faceless hordes of Vietcong they end up battling.

But while that description sounds like a tedious exercise in fact-relation, the book is anything but, due to the fascinating things Kubert does with the art.  As mentioned, he foregoes the use of word balloons, relating everything via captions, which sets the art apart from the words, making for more of a free-flowing series of images, a feeling which is only bolstered by the lack of panel borders, which allows Kubert to spread the art organically across the page, one scene flowing into the next, the reader's eye swooping in elegant curves to match the lush greenery on display throughout.  One could conceivably ignore the captions altogether and manage to piece together the plot using only the images, and still end up pretty satisfied. 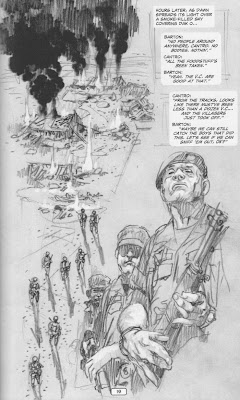 And to increase the difficulty level, Kubert's art is presented in "unfinished" form.  Actually, that's not completely true, since this is meant to be the final product, but the art remains uninked, raw pencils sitting naked and exposed, with "underdrawing" and guide marks still visible, allowing the viewer to see the process underlying the making of the images.  And yet, this doesn't seem amateurish or unfinished, but simply an expression that this is enough, no further embellishment is needed to get the idea across.  If anything, the elegant pencilwork communicates a down-to-earth roughness, befitting the dirty, bloody nature of the story's violent battle.  It's harsh and unforgiving, such that any mistakes would be even more obvious; luckily, Kubert doesn't make any.

No, he manages to take a bare-bones script and infuse it with life, making the jungle seem oppressive and full of secrets, giving characters emotion and expression, and filling action with motion and violence.  It's amazing, and it pulls the reader right into its struggle.  But while it might be difficult to do so, if one can take a step back and examine the art, it's like a miniature symposium on comics storytelling, full of near-invisible techniques for communicating information simply and succinctly, like the way depth can be shown by giving characters in the foreground more detail while simplifying them as they recede into the background: 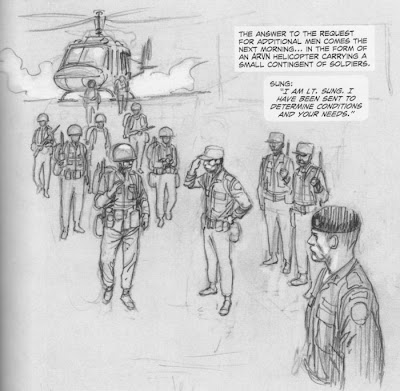 Using contrast to guide the eye to the most important part of a scene: 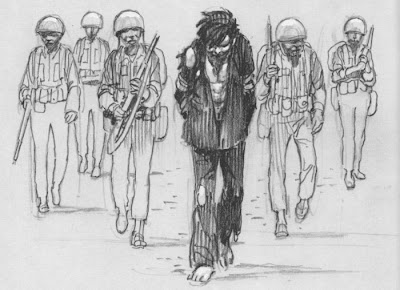 Or the way looser shading can portray light, shadow, and definition, while denser scribbles of lines can represent smoke or darkness: 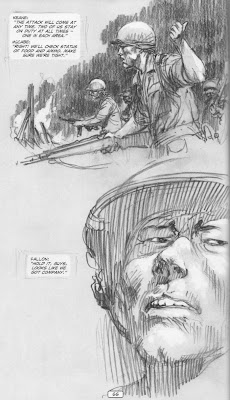 Of course, that sort of thing might seem obvious, but Kubert makes difficult-to-master techniques look easy, which is what comes from a lifetime of practice.  The fluid motion he manages to convey even in the midst of crowded scenes of rushing figures is something that seems a bit tougher to grasp: 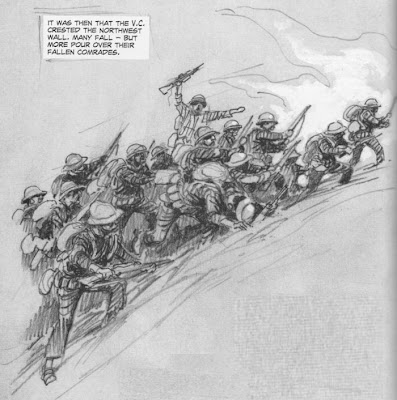 As is his ease with facial expressions, which manages to differentiate characters excellently, while convincingly conveying a full range soldierly qualities like determination and righteous anger: 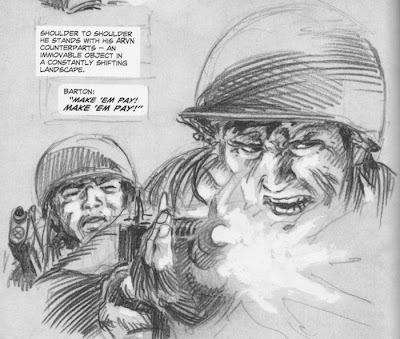 It's a master class in comics art, but one could be forgiven for not even noticing and just being pulled along by the velocity of the storytelling.  Kubert has put together a signature work here, one that should be studied for years to come.

If there's anything to wonder about, it's the lack of political comment, which here is mostly limited to American troops being limited to acting in an advisory capacity.  Perhaps enough time has elapsed that that pointless quagmire of an exercise can be another setting for tales of heroic derring-do, especially when placed at this early date, before things got really ugly.  No, the real complaint would probably be the glorification of war; while Kubert doesn't pull any punches when depicting death, the whole affair does have a heroic feel, with soldiers rescuing each other with exemplary marksmanship, or going out in a blaze of glory in defense of their fellow men.  It's kind of old fashioned in the way it seems uncritical of war itself, even while depicting its horrors.

But whatever your feelings about the book's ultimate message, you can't deny that it's a gorgeous piece of artwork, a great example of the talent that Kubert has honed over decades of work and now wields as an instrument of comics-making excellence.  He sets a hell of an example for the generations of artists that have followed him, and if there's anything right in the world, he will continue to do so for many more.
Posted by Unknown at 11:30 PM