Wilson: No wonder he was so grumpy at Dennis 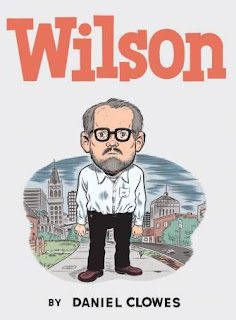 Interestingly, in this latest graphic novel from Daniel Clowes, he seems to be attempting to explore the "Clowes character" archetype, or at least present it in an unfiltered manner, without softening it with any sort of lovability.  No, the titular fellow is a pure bastard, opinionated, cantankerous, and ready to offer his opinion on everything he sees, while ignoring any faults of his own.  He's a middle-aged fellow, divorced, jobless, with apparently his only friend in the world (aside from an unnamed person he occasionally talks to on the phone) being his dog.  In the first panel of the book, he claims to love people, but almost immediately yells at somebody for talking too much.  He then goes on to profess interest in his fellow man, the city he lives in, and his parents and their history, only to turn around and complain about something else.  He looks down on everyone he meets, always finding something to ridicule, whether it's working on a laptop at a coffee shop, using abbreviations like "I.T.", or simply not making a fuss over the cuteness of his dog.  It's almost ridiculous how much Clowes paints him as a pathetic asshole, as if he's trying to see if it's possible to craft a completely unlikeable character and still see if he can get readers on his side.

The misanthropy of his main character is only one of the barriers that Clowes sets up for himself; he adds another by making each page of the book its own standalone strip, a moment in Wilson's life that is more often than not punctuated by a punchline.  The pacing of strips is quite regular in its Charles Schulz-like rhythm, only instead of ending strips with Snoopy saying "Bleah!", we get Wilson shouting obscenities at someone.  And to make things more interesting, each strip is presented in a different art style, cycling through Clowes' various techniques, including ugly, pimple-faced "realism"; noir-ish shadows; big-nose cartooniness; minimalistic, Ivan Brunetti-like figures, monochromatic simplicity; brightly-colored cutesiness; and so on.  It's kind of fascinating to see what comes next on each page, but it's not arbitrary; the styles match the tone of each individual moment, using newspaper-strip-like repeated imagery for scenes in which Wilson stays in one spot delivering a hateful monologue, then switching to a more colorful, fluid look for a strip requiring movement, or close-up images of awkward faces for an emotional scene.  It's a good way to keep the story interesting when following a mostly unchanging character.

That's not to say that Clowes doesn't give Wilson anything to do; instead, we see him go through something of a mid-life crisis, as he flies cross-country for his father's funeral, decides to seek out his ex-wife, and ends up finding out he has a daughter he never knew about (Spoiler? The back-cover blurb describes him as a father, so it's not that big of a surprise).  Through all this, he stays the same, or at least maintains the same outward appearance, always finding something to complain about and refusing to budge when his beliefs are challenged.  Clowes still manages to convey some inner development though, which is especially impressive given the irregular art.  By the end of the book, Wilson is an old man, and while he's still a cranky bastard, he seems to have softened somehow, if only in the desperation for some sort of human connection that comes through in his eyes.

Is this all simply an exercise for Clowes, a way to set up interesting artistic hurdles and see if he can clear them? Perhaps, but it still ends up being an interesting character exploration, a challenging way to look at somebody who is so external and see if it is possible to gain some insight into his thoughts and emotions and make people empathize with him.  And the amazing thing is, he accomplishes just that, giving a simplistic misanthrope a rich life and making readers care about what happens to him, or at least want to go along for the ride.  As with so many of Clowes' characters, we might not want to meet them in real life, but we can't tear our eyes away from their on-page adventures, and we feel like we've met somebody real afterward, no matter how ridiculous and unlikeable they might seem at the outset.  It's a strange alchemy that Clowes wields, but he's honed it to perfection over the years, so we'd best just let him work his magic and come away satisfied.
Posted by Unknown at 11:01 PM