Love and Rockets: Soaring ever-upward into the pantheon

By Jaime and Gilbert Hernandez 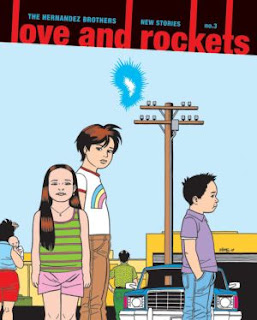 The Hernandez brothers have been making excellent comics for so long that another installment of their long-running series might seem unremarkable, but the current format, which sees 100-page "issues" released annually, makes each release notable, a little book of good material.  And this one is really damn good, with a typically surreal and horrifying story from Gilbert and an excellent bit of character work from Jaime.  Isn't it awesome that stuff on this level is what we've come to expect?
Gilbert first:  I gotta say, the more I see of the current run of "Teenage Killer" stories, the less interest I have in the character.  Her story in this issue is the low point, and while it has some interest, mainly in the abrupt scene shifts and what might be some meta-commentary, it doesn't seem to go anywhere, much like Gilbert's story in last year's issue.  I am interested in that meta aspect, which sees a young actress complaining about only being able to follow in her great aunt Fritz's footsteps, telling the same stories over and over; is Gilbert tired of following his group of characters, ready to break out and do something different?  He does seem to be doing his most interesting work lately in the related books like Speak of the Devil and Chance in Hell (some of which get mentioned here, along with a story from MySpace Dark Horse Presents); maybe he would be better served to just go in that direction completely?
He kind of does exactly that with his other story in this issue (although, as with the aforementioned works, it is referred to as a movie within the larger Gilbert universe), which is a sci-fi tale that sees three workers fucking around with the animal-people denizens of the land in which they are installing some sort of equipment.  It's weird, nasty stuff, with the "civilized" humans thinking little of mistreating the natives, starting out by making fun of them or manipulating them for their own amusement, and eventually escalating into horrific rape and murder.  It seems like it could be a symbolic statement about how first-world countries treat people in the third world as sub-human, or maybe a statement about animal rights, but an offhand statement by one of the characters that "Everyone's all worked up about helping the Haitian earthquake victims, but not a peep about any Chilean earthquake relief efforts" seems to point toward the former interpretation.  But whatever you want to read into it, it's a striking, horrifying story, full of the signature harsh linework, inky scribbles, and pools of black that Gilbert does so well, with the scariest details being the grinning characters who don't seem all that disturbed by their own depravities. 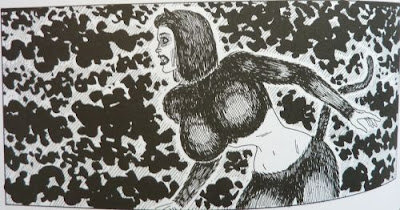 Jaime, on the other hand, has managed to keep his own cohesive world of characters alive for as long as the series has been running, in something close to real time.  He has two stories, here, with a "present day" tale of Maggie hanging out with old pals Reno and Ray split apart and bookending a flashback story to Maggie's youth that is pretty powerful.  It's a fascinating look at Maggie and her siblings as they lament moving away from their old neighborhood so that they can live with their father, bickering and teasing as kids are wont to do, and only barely cognizant of the troubles that are taking their toll on their parents' marriage.  It's an effective way to place readers in the point of view of the kids, painfully aware of the emotions that are going right over the characters' heads.  There's also a plot involving the abuse of Maggie's younger brother Calvin by an older boy that is horrifyingly realistic, the predator enticing the prey with the air of knowledge and worldliness that comes from being a few years older, and the pain being inflicted displayed all too openly on the younger boy's face.  It's harrowing stuff, and it comes to a boil along with everything else, eventually exploding in a way that makes Maggie's mother's reaction understandable but still just awful and sad. 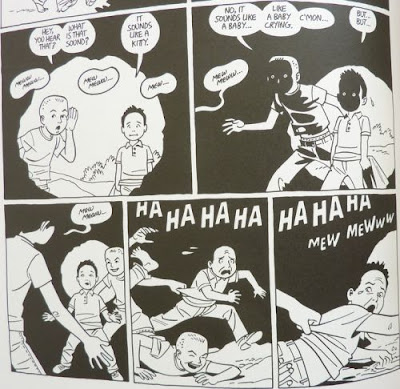 That flashback is kind of the centerpiece of this issue, although it informs the latter-day story in interesting ways, highlighting the way Jaime has managed to build such a compelling cast and let them grow and develop such that they are as real as any of the readers by this point.  Jaime's art is so casually excellent by this point that it's easy to miss his subtle touches, like the way characters move so naturally, or how he shifts the reader's view around from different angles to keep a conversation from being the same panel repeated over and over.  And the way he makes the characters age so realistically, adding width to their faces and bodies, including extra lines on faces only when necessary, is so graceful that it's hardly noticeable, but kind of mind-boggling when you realize how obvious it is that these are the same characters at different ages.  It's quiet excellence, easy to take for granted, but amazing work all the same. 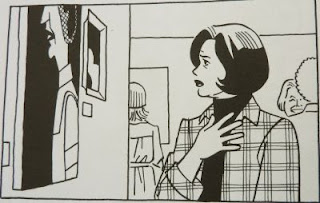 Yes, it's another great issue of one of the best comics series of all time; what else is new?  Jaime and Gilbert are rightfully revered as all-time great creators, but the fact that they are still pumping out incredible work and bettering themselves, sure to keep doing it for as long as possible, should make readers celebrate their wealth and fortune.  Even if everybody else quit, we would still be pretty lucky.  Long live Love and Rockets!
Posted by Unknown at 8:07 PM