And here is the first of at least two collections of reviews of various minicomics I've obtained recently:

Stories, Volume 3: "Catch Me If You Can"
By Martin Cendreda
Buy it from Quimby's 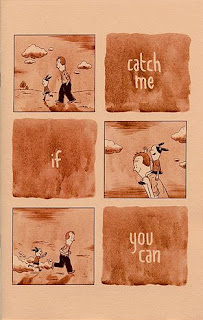 This affecting little story is one of the things that minicomics do so well, conveying a short story in an attractive package, a pure bit of the artist's essence, direct from his mind to yours.  Or, it's an opportunity for a creative person to goof off and experiment, seeing what works and giving readers a glimpse of his process.  Either style is worthwhile, but this particular example falls into the first category, a beautiful little story about a man and his daughter eating ice cream cones and playing together, and when he turns away she wanders off, and the next thing he knows, she's grown older.  And older.  And then he dies.  The end.  That sounds ultra-simplistic, but it's done so elegantly here, a basic concept conveyed perfectly without any words, the cute, playful images going straight for the gut.  It might be something that hits harder for actual fathers (or mothers), but it works so well here, with Cendreda capturing the love between parent and child through expressions and body language.  When you have to wipe away a tear after reading it, you know he's done his job well.
-----

Monday, Part One
By Andy Hartzell
Buy it from Global Hobo 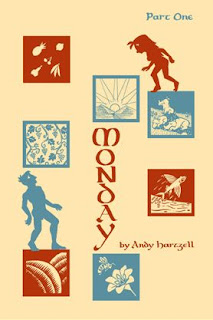 Andy Hartzell's 2007 graphic novel Fox Bunny Funny was a pretty fascinating bit of symbolism regarding sexuality and lifestyle choices, and with this minicomic, which is the first chapter of another book in progress (although it should be noted that this first minicomic is dated 2004, so it predates the more well-known book.  So far, three chapters have come out, apparently forming about half of the complete story), he shows that he certainly hasn't exhausted his idea factory.  The story here picks up in the Garden of Eden, on the titular day after God's post-creation day of rest, and while Adam and Eve are happy, they're wondering what's next, figuring out their brand-new world, how it works, and how they fit into it.  The snake (sporting a weirdly square, human-like head on his regular skinny body) shows up and sows doubt about God, saying his creativity is all played out, prompting a trip to "the birthplace" to see what God is up to.  He ends up being a grumpy artist type (and another weird design, with a single eye atop a pyramid-shaped head, and a beard that turns all pointy when he gets angry), upset at the snake's criticism, sure that his best work is still ahead of him. It's an interesting take on the Judeo-Christian creation myth, establishing personalities for the characters (Adam loves the simple pleasures of their world, like the funny monkeys, but Eve is less happy, unsure whether the sun is going to come back up after it disappears for the first time, although she does love the peaceful beauty of the garden, especially the lion laying down with the lamb) and coming up with a quirky plot conflict in which we wonder what God's next move is and how it's all going to lead to the expected moments with the apple and the banishment.  What Hartzell's ultimate message is remains to be seen, but his enjoyably chunky art and expressively odd take on a well known story should make it really neat to see him get there.
----- 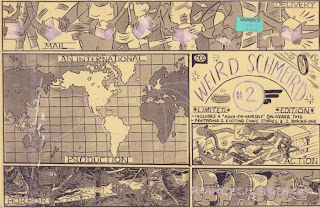 Here's another thing that minicomics can do that others can't, at least not without being expensive: provide a unique, one-of-a-kind object.  This booklet comes in a plastic bag that is decorated by the artist (with a pink paint that doesn't show up well on my scanner, but looks really nice in person), adding an extra touch of craft as Ryan Cecil Smith embellishes the images on the cover.  There's also a laser-cut cardboard insert with which readers can punch out and assemble their own package-delivery-related toys: 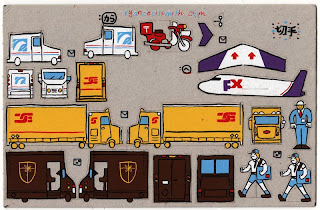 Luckily, the inside of the book matches the creativity of the presentation, containing "two exciting comic stories and one boring one".  The first two are full of crazy energy, with one following a trio of bicycle-riding spies as they rescue a fellow agent who has been captured and held prisoner at a secret ninja training camp.  The story is an explosion of motion and excitement, with panels angling crazily all over the pages, characters crashing into each other and bikes racing and jumping everywhere.  It's pretty awesome: 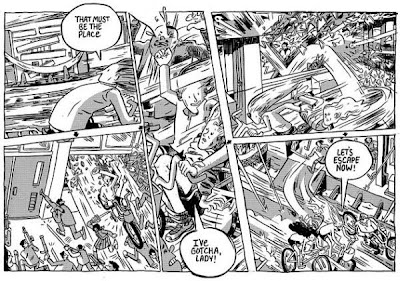 The second story is an entertaining horror tale in which two teenage girls wander into some dangerous woods and get menaced by an evil witch/mad scientist.  It's enjoyable stuff, full of moody shadows and idiosyncratic character art.  Finally, the "boring" story is an autobiographical tale of Smith working in a college mail room and chatting with the drivers who make deliveries.  It's kind of interesting, although the opening diagram of the workplace is probably the highlight, demonstrating Smith's Dan Zettwoch influence most strikingly.  There are also some sketchbook sections that show off some really nice art drawn in India and Japan; the whole thing is a pretty great encapsulation of Smith's style, showing off his chops and indicating a wide range of different directions in which he could go with his work in the future.  Whatever the case, it should be lots of fun to go along with him for the ride.
----- 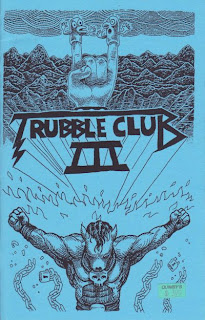 This minicomic collects the output of a "secret" group of Chicago cartoonists who meet regularly to jam exquisite corpse style, with one person drawing a panel at a time, adding up to a truly bizarre series of comic strips (you can see some examples at their official blog).  Some of the contributors are recognizable, such as Lucy Knisley, Laura Park, or Aaron Renier, but they all seem to get subsumed into the whole, becoming concerned with grossness and bodily functions and often cruel death.  Some strips take on a narrative as people add subsequent images, while others remain a parade of strangeness, but the talent of most all involved is clear, as they all reproduce each other's images and put their own spin on them.  The best are ones in which a concept is presented in the initial panel and everyone else runs with them: a man saying "Look what the cat dragged in" leads to a series of gruesome Garfield jokes, and what starts as a series of weirdos spouting non sequiturs like "I sneezed on my cheese!" leads to a pretty hilarious punchline.  If you're receptive to seeing what artists get up to when they're screwing around (and probably drinking), this is totally worth a look.
Posted by Unknown at 8:59 PM