Grinding the AX: Finishing with a return to the weird shit

One final leg on the trip through AX:

"The Ballad of Non-stop Farting" and "I Can't Stand Pain!"
By Kataoka Toyo

From the title, one would assume these stories are focused more toward the puerile end of the spectrum, and while that's somewhat true (in that there are fart jokes and sex is on everyone's mind), they seem to be more of a gently comedic look at blue-collar workers, following several factory workers as they plug along through the daily grind.  The first sees a couple guys go check on a coworker who didn't show up for work, leading to a darkly comic bit in which they decide to go get a drink before venturing into his house just in case he's dead, which would mean they would have to spend the evening dealing with the police.  There's also a pretty incredible two-page spread of the sick guy laying on some densely-detailed tatami mats, unable to move because of his terrible gas pains, which is an interesting choice.

The second story is a bit longer and gets more involved with the various factory personalities as they go out for a drink after one guy cuts off his finger, and after they admire how much money he must make working two jobs, he admits that he blows it all on hookers.  Maybe this could be interpreted as another look at the pointless nature of modern life, but if so, it's also a warm one, casting a humorous eye on the dumb things people do in order to get by.  The art is passable, fitting the slightly grotesquely cartoony style that you often see in this sort of manga, but the textured details really make it work.

At first, this seems like a silly lark, following a widower who has 50 tiny boys (they're all identical, about six inches tall, milling around his house like rodents), illustrated in a somewhat crude style, but taking the goofy concept at face value.  It quickly becomes obvious, however, that the kids are all imaginary, and he's still grieving over the death of his wife, a revelation that suddenly makes his blissful paternal existence achingly sad.  It's a quick story, but it lingers in the memory, hitting that emotional trigger of lost love, and also the lost chance for responsibility and leaving one's mark on the world through the younger generation.  Sometimes the simpler stories can sneak up on you and end up being the best and most memorable ones of all.

This is apparently an adaptation of part of Dostoevsky's Crime and Punishment, or at least a portion of it, but it's fairly incomprehensible to me, either because I haven't read the book, or because it's just confusing.  There's a hooded figure and a little girl who calls it her brother, and a corpse or something, with lots and lots of narration filling the pages.  Pretty boring, although some of the imagery is arrestingly grotesque, and there's an interestingly angular use of toned shading.  But other that that, it does nothing for me. 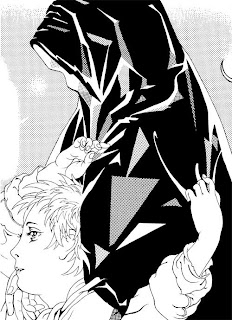 This one is apparently based on a German folk tale, and it's interesting, both because of the very non-manga art style, and because of the striking sexuality on display.  A deadbeat guy is about to hang himself, but he finds a beautiful naked woman, takes her home, and has a lot of sex with her as she apparently consumes his essence, then reverts back to a mandrake root and is carried away by a cat, presumably going on to further seductions.  The thin-lined art is densely-shaded, full of dark, foreboding mood, and while the woman is silent throughout, she seems seductively in control, always wearing a come-hither look, displaying her ample assets and just oozing sexuality, making the guy's gruesome end all but unavoidable.  There might be something going on here about the evils of female sexuality, but I can't really work my way around to any sort of intended moral, and with the guy already being kind of doomed from the start of the story, maybe this is just a tale of the supernatural, something to confound analysis and stick in the mind with its weird imagery.  Or maybe it's just a chance to draw a sexy naked lady and some blurred-out intercourse, which is always possible.

This one almost seems like it was made up as it went along, starting with an image created by adding small details to some harsh brush strokes to turn them into the scene of a mountainside cabin and extrapolated from there, following a mountain climber who meets a woman that is also climbing the mountain, has sex with her, and then travels back in time to meet his younger self.  Who knows what is supposed to be going on here, but the way the images are composed of those brushes being swiped across the page and details being added later is pretty arresting.  It might be nice to see an actual story illustrated in this style, but this one works as a cool technique and an interesting bit of mood. 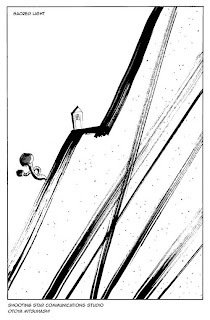 And finally, more weirdness.  This is a samurai-era story about a woman who schools her daughter in the titular Six Paths of Wealth, a belief system based on absorbing power from insects or something, which basically involves dumping ants on her naked body to keep it fresh and enticing to suitors.  The mother and daughter end up getting shrunk and captured by an ant-sized alien who has plans on world domination, but they turn the tables on him with their sexuality.  Bizarre, but memorable due to the air of strangeness and the crazy imagery like the design of the alien and the mother being turned into a half-ant creature.  Also, lots of nudity.  I'm not sure if this is based on any sort of actual medieval beliefs, or was just made up by the cartoonist, but it's strange stuff, one of those horror tales that doesn't make much sense, but is still pretty enjoyable. 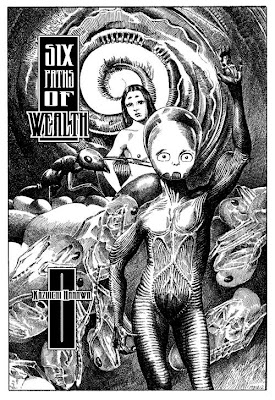 While not every story here is a winner, there's enough really good work here that the volume is definitely worth reading, especially as a source of comics that would never make their way across the Pacific outside of a book like this.  For years, people have spoken of the vast wealth of comics that remain unseen outside of Japan, and this glimpse of some of them is essential, but hopefully not exceptional.  Fortunately, a second volume has already been announced, so if we are lucky, they will continue to appear and weird us out for years to come.

Five cartoonists I would love to see more from: