This past weekend was the second annual Chicago Comics and Entertainment Expo, and judging by this year's show, it should continue to grow into the excellent comics-focused convention that the area needs. Based on the schedule and information available beforehand, I had wondered if the show was already showing signs of decline, but I needn't have worried; while the scale did seem to have contracted, with what seemed like a little bit smaller space, a narrower range of programming, and fewer big-name creators (at least outside of the Marvel/DC axis), the show continued to be very enjoyable, with presence from most of the major publishers, a varied retailer section that wasn't too crowded, and a thriving artist alley. There was never a lack of things to do and see, whether your preference lies in meeting writers and artists, hearing publisher announcements, buying anything comics-related you can think of, or just gawking at people in strange garb, and the crowd was full of like-minded people to interact with. 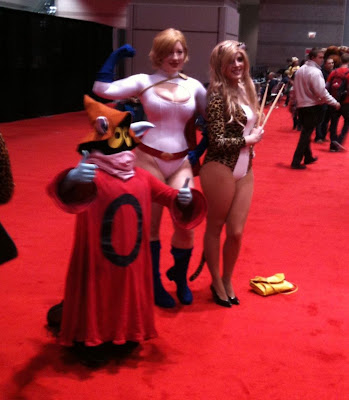 So what could be different and/or "better" about the show? Speaking from a purely selfish perspective, I would love to see more of an indie/artcomix presence, with booths for publishers like Fantagraphics, Drawn and Quarterly, Picturebox, Pantheon, or even manga publishers like Viz, Vertical, or (while I'm dreaming) the elusive Kodansha. A stronger indie artist presence would also be nice, especially self-publishers and makers of minicomics. I don't know if any of this is economically feasible, for the companies, the creators, or the show itself, but I've never let practicality get in the way of my wishes. On a more likely note, I would like to see a greater range of programming, especially panels focused on creator (or critical) discussion, and less in the way of publisher announcement panels, which are perfectly fine, but seem to all run together in their "here's what's coming up next!" enthusiasm. And on a layout note, the webcomics section could stand to be rethought as well; as it is, it was a simple aisle in artist alley, but it didn't include some of the more well-known webcomics artist like Danielle "Girls with Slingshots" Corsetto or Evan "Rice Boy" Dahm. 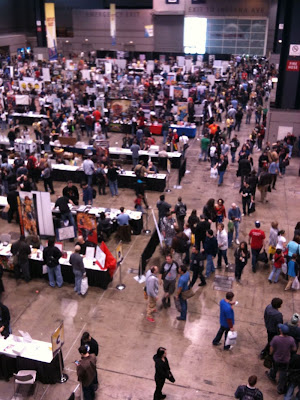 Minor complaints and wishful thinking aside, I had a great time at the con, and in addition to meeting creators I admire and spending lots of money on comics, there was information to be learned, and thus related in an overly excited manner:

Item! Sanford Greene has a story called "Rotten Apple" in the second issue of the revived Dark Horse Presents anthology, and it looks amazing, a demonstration of a new, energetic, brushstroke-heavy style for him. It's one of several reasons the series looks to be worth checking out.

Item! Ray Fawkes' new graphic novel One Soul from Oni Press looks like it could be really good, using a neat formal conceit in which eighteen characters are followed throughout their lives, each one given one panel per double page spread, allowing patterns to emerge throughout the course of their unconnected lives, which range across the course of human history. It's a bold leap of faith in readers' willingness to go along on such a complex journey, and hopefully the content and characters will live up to the presentation.

Item! The webcomics collective Four Star Studios (which consists of Tim Seeley, Mike Norton, Josh Emmons, and Sean Dove) is taking a leap into the convoluted waters of digital publishing with their venture Double Feature Comics, a monthly digital-only release that will feature short stories following a changing theme (the first month is "action", followed by "monsters") and a lineup of great writers and artists that includes Mike Norton, Ryan Browne, Phil Hester, Chris Burnham. The issues will be ninety-nine cents, and they will be available in PDF format, or via an IPad app that will include features like commentary and the ability to view the pages at pencil, ink, and color stage. It looks like a cool venture, and hopefully one that will pay off for all the talented people involved.

Item! Dave Crosland's art continues to look amazing, and he's actually doing some comics here and there, including a story in Boom!'s recent CBGB series.  He is also regularly posting images to his blog, Alphabet Attack, going through the alphabet to come up with cool stuff to draw.  Check it out.

Item! As always, there were plenty of new and interesting comics to discover.  Some others that looked interesting include Terra Tempo: Ice Age Cataclysm (beware a flash intro and overly-designy, hard-to-navigate site), which appears to be about kids traveling to the ice age and having well-researched adventures; Jose Lopez's Mariachi Samurai, about which little information is to be had beyond the cool title; and the webcomic Free Mars.
-----

So that's all the news that's fit to print on my end.  More content to come over the next few days though, and I'll be hoping for continued convention excellence from C2E2 in the years to come.
Posted by Unknown at 10:49 PM