Gladstone's School for World Conquerors: They're not all bad

Elsewhere: Continuing my streak of writing about movies rather than comics, I contributed a thing about Four Lions to The Factual Opinion's latest movie column. Check it out if you're at all interested in a British comedy about would-be suicide bombers. Fun!

Also, I'm one of the contributors to this zine, which was put together as part of the Team Cul de Sac initiative to benefit cartoonist Richard Thompson, who was recently diagnosed with Parkinson's Disease. I'll post more information, including where you can get a copy, as it is made available.

Links: I thought this comic about living with epilepsy was really interesting, even though it seems to suffer from an awkward translation, which is strange, since its creators are apparently English-speakers. Still, it's quite good.

And I might be late linking to this, but you can read Jim Rugg and Brian Maruca's Eisner-nominated Afrodisiac in its entirety for free here. Check it out! 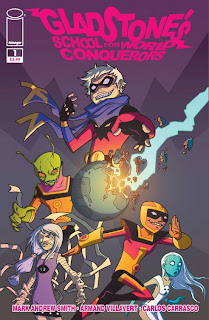 The superhero genre of comics may be essentially dead, but there might be a little bit of energy to wring from its bones, at least in the indie margins proliferated by the likes of Adam Warren or, uh, well, there must be somebody else doing interesting work. Mark Andrew Smith, co-creator of such neat-o comics as The Amazing Joy Buzzards and Aqua Leung, looks to be making an attempt to join the ranks of those who are trying to do something interesting rather than just rehash all the usual riffs on Superman, Batman, and Spider-Man, with Gladstone's School for World Conquerors, a reversal of the occasionally-glimpsed "superhero academy" micro-genre. It's possible that this could turn into something pretty enjoyable, at least as a genre riff on a well-established type of serial storytelling in other mediums, but as with so many first issues, it's kind of difficult to tell, since this is mostly introduction to the setting and cast.

The issue begins with what seems to be a non-essential prologue in which an alien speaks directly to the reader and relates the backstory of the titular place of learning; it might be an attempt to establish an atmosphere, but it's slightly awkward, neither completely goofy nor serious, just a bit "off" from the regular cape style. And maybe that's the point, since what follows is more or less standard high school drama with a bit of villainous flair injected. We quickly get to know the pompous rich kid who gets upset at any grades below A, the withdrawn girl who secretly likes the popular guy, and the rival cliques who provoke a schoolyard dust-up. It's nothing groundbreaking, but Smith does make the interpersonal dynamics interesting, given that these are evildoers-in-training. The aforementioned fight is a solid bit of action, and the speechifying and banter are enjoyably "bad", kids trying to be all mean and tough.

Smith does seem to be setting up some interesting ideas regarding the world in which this school is situated, and he does fill the book with nice details, like classes on "victory speeches" and goofy code names for all the students, so future issues could build on this one to form a pretty satisfying series. A large part of that enjoyability will be due to the artist, Armand Villavert, though; he's got a cool, cartoony style that's clean and dynamic, yet full of fun details, like the way Mummy Girl (the aforementioned shy girl) has prehensile embalming cloths: 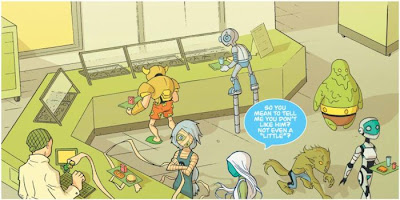 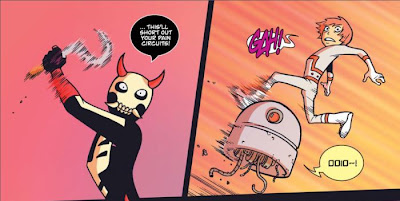 And the designs of the characters is top notch; I especially like the K- and N-tipped scarf worn by Kid Nefarious, and the neat-looking students wandering around in the backgrounds of scenes add a sense of life to the book, making it feel like there's a lot more to explore beyond this issue's focus. Villavert is also greatly helped by colorist Carlos Carrasco's bright palette, which really pops the images right off the page. All in all, it's a gorgeous-looking comic, sure to stand out on the stands.

So it's certainly worth checking out, but will it last? That's the question; if Smith and company can continue to build their world into something interesting and fun (and keep the book going beyond a few issues, which is something that often plagues Image books), this could turn into something special, one of those series that people can point to as evidence of life remaining in the direct market. That would certainly be an ideal result, but it's a pretty steep hill to climb; I hope these guys are up to it.

This review was based on a complimentary electronic copy provided by the creator.
Posted by Unknown at 10:06 PM