The recent one-shot Hellboy: Being Human (one of a series of always-excellent Hellboy stories written by Mike Mignola and drawn by Richard Corben) was quite good, and it featured some really nice Corben art, which isn't exactly out of the ordinary for him, but certainly seemed to feature some stuff worth pointing out this time around. I always enjoy the grittily-textured volume of Corben's figures and their surroundings, and that aspect pays off well here, grounding the spooky setting well. And the grotesque corpses are as leeringly skin-crawling as ever, while the rough grappling of Roger the Homunculus and a similar "thing that walks like a man" is wonderfully physical. But that's regular Corben stuff; where he really starts to shine is when the action kicks in, when he gets to contrast the stony visages of Hellboy and Roger with the old witch antagonist of the tale: 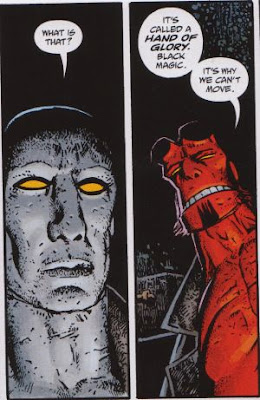 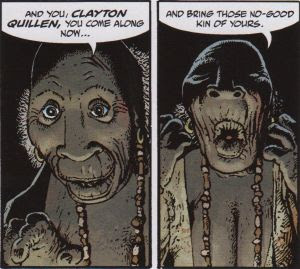 With a title like "Being Human", the comparison of the (justifiably?) angry old woman, who has let her hate turn her into a monster, and the struggles of two monstrous creatures with souls seems obvious, but for an expressive artist like Corben to bring it internal is really interesting.

Later, Corben gets even more expressive, with this great panel of the witch's wild gesticulations: 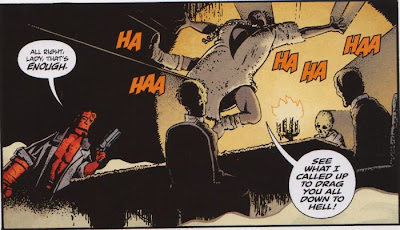 And an incredible combination of Kirby-style energy and a Ditkovian sound effect for an explosion: 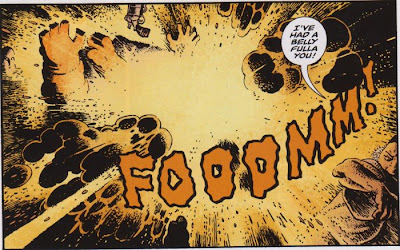 A climactic image of the witch's face is pretty amazing too, especially the scratchy detail of her hair, which seems like something that would come from someone like Guy Davis, and is startlingly effective as a frozen moment:

It's pretty awesome artwork all around, some seriously great work from Corben, who has been doing this for over forty years now. If he keeps showing up with stuff like this, we'll all be better off.
Posted by Unknown at 12:01 PM

Email ThisBlogThis!Share to TwitterShare to FacebookShare to Pinterest
Labels: Art What I Like, comics, Hellboy, Richard Corben