Art What I Like: Chris Burnham, he da man

In what seems to be turning into a continuing series, here's another artist whose work I recently found to be exceptional: Chris Burnham, in Batman, Inc. #6. I’ve enjoyed Burnham’s work for some time now, and he’s done nothing but improve over that time. He’s been compared to Frank Quitely, which I think is fair (not to mention high praise), due to his impeccable body language and composition, but he’s like Quitely with a coat of grime, which is great for down and dirty fight scenes. He’s also gotten really good at bright, clean imagery, which works great for the current direction of this Batman comic. For instance, check out this panel of badass butler Alfred foiling some thugs:

I love the casual “trip and tase” action and the facial expression on Alfred, but the detail that really gets me is the emoticon-themed masks of the bad guys, which gives them expressions that perfectly fit their individual situations. The guy getting tripped seems to be going “oh crap!”, the taser recipient has an eye-squinted “Augh!” look, and the guy in the foreground seems to have a wide-eyed questioning look. It’s hilarious, a series of perfectly-captured details. I don’t know if this was all Burnham’s invention, or if it was specified in Grant Morrison’s script, but either way, it’s done wonderfully.
I also dig the full-page spread that follows that moment, with a smirking Bruce Wayne looking down at the criminals while flanked by massive Batman robots: 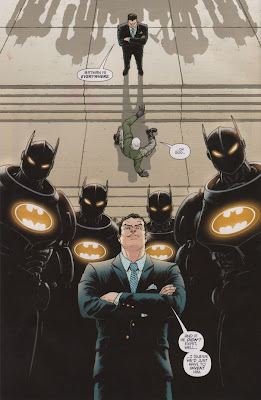 I love the staging there, and the way the robots' heads and shoulders provide the panel border.
The other thing I enjoy about Burnham’s art is the slight exaggeration, often seen in action scenes, like this bit featuring Cassandra Cain in her latest guise, the Black Bat: 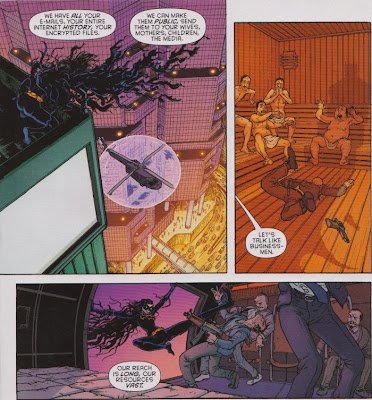 The tattered cape is just nuts there, a huge cloud of tangled fabric, but what I really love is that elongated leg kicking the guy in the face. That’s a great effect, really emphasizing the action without making it appear especially unrealistic. Morrison’s current approach to Batman seems to be a bit more of a lighthearted and fun take on the character, and Burnham is becoming the perfect artist for him.
Of course, he manages to do creepy and grotesque pretty well too, as in this image:

There’s nothing like murderous kids to spell out “evil”, and I love the gleeful look on their faces as they’re covered in gore. That’s not really lighthearted, but it sure is funny, and the huge smiles are another great example of exaggeration.
I also wanted to mention the closing double-page spread of the issue, but I didn’t think it was fair to post it, so if you have the issue, check it out. It’s a series of panels of Batman and his pals all over the world beating up criminals, and it looks really cool, but I didn’t even realize until my second look how well it’s laid out, with the figures, buildings, and shapes all continuing from image to image, one guy’s torso leading into another’s face-kick, a ruined construction site turning into a high-rise building, all showing how well-coordinated Batman’s worldwide operation is. It’s a pretty amazing bit of artwork, images fitting together with perfect perspective and characters perfectly positioned and choreographed. If this is the kind of thing Burnham is going to be doing with Morrison on this book, I hope he keeps cranking it out for a long time to come.
Posted by Unknown at 7:00 PM

Email ThisBlogThis!Share to TwitterShare to FacebookShare to Pinterest
Labels: Art What I Like, Chris Burnham, comics, Grant Morrison