Art What I Like: Brian Hurtt brings the ruckus

I've highly enjoyed Brian Hurtt's art for some years now, what with its fluid action, nice character work, and nifty, non-showoffy flourishes.  And look at this: the most recent issue of The Sixth Gun (#12) provides an excellent example of what he does so well in a two-page sequence from the middle of the issue, where a gang of resurrected outlaws make an assault upon a train carrying our heroes: 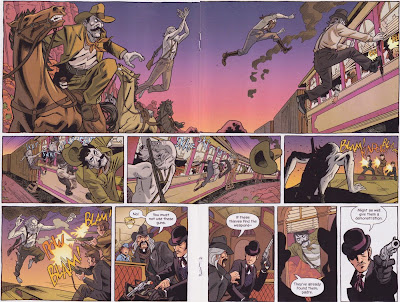 I love the way that first panel works as an image of four separate guys jumping from their horses to the train, but it also makes for one fluid motion from the left side of the spread to the right, showing the full arc of the leap(s). Rather than giving one image of a guy frozen in midair (or four guys all in the same jumping position), it fills in the "moments" of the jump, doing the work for the readers and giving the scene an animated quality without doing that Spider-Man thing where his motion is demonstrated by "ghost images" trailing behind him. But it's completely understated; you don't even realize that's what Hurtt is doing until you look closer.

He does a similar thing in the second panel, with the zombies skittering along the side of the train like insects, each figure pressing closer to the reader, as if they're going to crawl right out of the page. As nicely-colored and clear as this artwork is, it's still creepy, scary stuff, and Hurtt really sells it like few others could.

Another thing I've long dug about Hurtt, and one that's not always obvious, is his sound effects, which have a cool, hand-drawn style that incorporates them into the art in a way that complements the action without distracting from it. The barely-seen "blam"s in the first panel perfectly signify the gunfire coming from inside the train, where the battle is already raging, and the "skkr-skkr-skkr"s of the second and third panels wind among the characters and along the train creepily, while the "blam!"s and "pow" of the panel in the lower left corner seem to be emanating from in between the muzzle flashes. It's intuitive, a fluid combination of words and pictures to make a scene come to life, and that's what comics is all about, right?

Finally, the last panel on the right page is a perfect capper to this series of moments, dropping out the background to signify a dramatic pause, while the gun points off the side of the page, beckoning the reader to turn and see what comes next. And when they do, they certainly won't be disappointed. Wanna see what it is? Then buy the issue! Trust me, it's worth it. This series is awesome.
Posted by Unknown at 11:36 PM