The Manga Guide to Relativity: Cliches can still be instructive 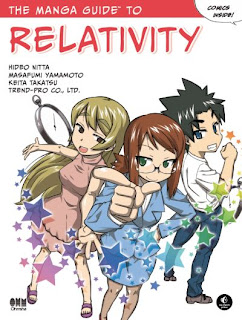 The Manga Guide series is an interesting one, grafting lessons in math and science onto oft-nonsensical plots, but managing to convey their subjects clearly and memorably. It might just be a cultural thing; American educational texts rarely attempt to entertain as well as teach, but Japan seems to embrace comics, cute characters, and silly comedy, so why not do so when teaching subjects that can be considered difficult and "brainy"?

The Manga Guide to Relativity is a pretty standard example of the series, featuring an incredibly rudimentary plot involving a student tasked with learning about the subject over summer vacation and a teacher explaining it to him, surrounded with a few bizarre details, like a fey principal who gives weird demands to his charges, a dog for a vice-principal, and a girl who seems to be eavesdropping under the pretense of practicing various club-related activities. But that's all mostly-unnecessary flavoring; the real content of the book are the lessons, which are remarkably good at explaining the unintuitive world of relativity, from a quick history of physics, to descriptions of the nature of light, to easy-to-follow explanations of time dilation and length contraction, to examples demonstrating the curvature of space. It's a fascinating subject, and while it can be a hard one to grasp, this book makes it seem easy, or at least understandable, which is a pretty impressive achievement. 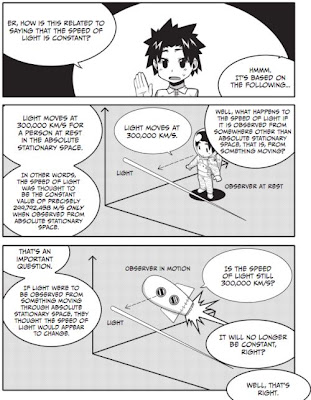 In fact, this book might be the best I've read at understanding relativity, not just the concepts of what happens, but why. Explaining the history of physics demonstrates why the speed of light being constant is such a game-changing idea, and extrapolating from there that space and time are variable is a light bulb moment. While the details of the explanations are often pretty goofy and full of slapstick comedy or hard-to-translate jokes, the explanations themselves are excellent; this could really be a textbook introducing the basics of relativity to students. 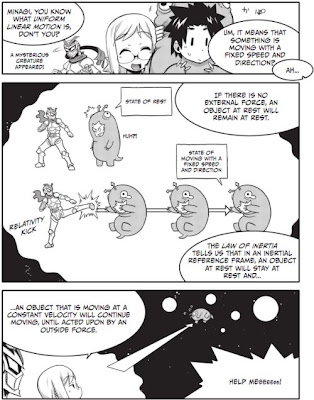 Of course, the general air of silliness would make this a hard sell in a classroom, at least as an officially-sanctioned text. There's a lot of nonsensical silliness, like the teacher smacking the student whenever he makes a dumb joke or gets distracted, and one chapter is full of gratuitous cheesecake when the teacher decides to give her lesson by the pool while wearing a tiny bikini. Lots appearances are made by a random superhero/robot character that doesn't really add much in the way of understanding, and the plot itself is pretty tacked on and distracting. But those are all minor annoyances, and they do add to the uniqueness of this presentation, especially with culture-specific details that occasionally pop up (I especially liked that Einstein's "Twin Paradox" is known as the "Urashima Effect" in Japan, after a folkloric character who briefly visited an undersea kingdom and returned to find that hundreds of years had passed in his absence). Overall, whether this is used in classrooms or just read by those with interest in the subject, it ends up being a pretty great resource, and hopefully a continuing example of the use of comics for education.
Posted by Unknown at 7:02 PM