Garden: I hope this isn't offensive

Links: Ryan Browne, creator of the hilarious God Hates Astronauts, has a new webcomic called Blast Furnace, updated daily seemingly wherever his muse takes him. Check it out, if profane goofiness is your thing (or even if it's not).
Also, Christina Strain, whose color work I've really enjoyed on books like Runaways and Spider-Man Loves Mary Jane, has a new webcomic called The Fox Sister, apparently based on Korean mythology. It looks really nice. 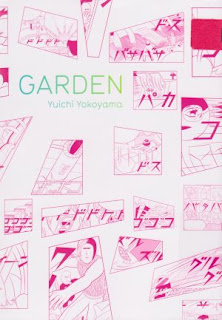 This is completely uninformed speculation, but reading this book makes me wonder if Yuichi Yokoyama is autistic (or, as my wife, an elementary-school educator, would say, "on the autism spectrum"). This is the only one of his books I've read, but from what I've seen and read about him, he seems to try to eliminate any sort of emotion, or even humanity, from his comics altogether, instead focusing on interesting physical constructions, designs, and motions. It makes for some fascinating art, a near-obsessive detailing and exploration of his mental creations, with so little in the way of narrative that at least this book can barely be said to have a plot or characters at all.

Well, that's not really true, since there are dozens of "people" (or human-like figures, at least) populating this book, and the story, such as it is, has a beginning and, if not an ending, at least a stopping point. We follow a group of figures as they wander through the eponymous garden, which is actually an expansive man-made area full of strange buildings, objects, and terrain, all there for unexplained purposes. There seems to be an urge to explore and question everything that is seen, but it's all done completely without affect, as the people describe everything they see in what seems to be a monotone ("We've now arrived at a round pond." "There are jagged objects floating in the water." "This embankment is made of bags of some sort." "There are strange mountains over there."), occasionally asking "What could the purpose of this be?" without ever receiving any answers. And that's the whole book, 300 pages of strange shit that eventually just ends. 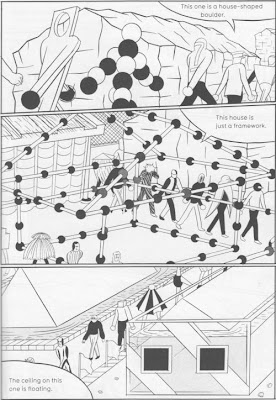 As the characters might ask, what could the point of this be? Yokoyama seems to have an urge to delineate the odd geography filling his head, but without any emotional aspect to the presentation, simply conveying information as if it's being recorded from some sort of alien transmission. It's fascinating stuff, often grouped in collections of things that look like other things (structures shaped like houses, artificial trees and mountains decorated in varying patterns, "rivers" full of flowing balls, and so on), detailed from multiple angles, and using the comics format to verbally describe objects, depict motion, and indicate other sensory input through ever-present sound effects.

Then there are the characters, scores of interchangeable (in terms of non-existent personality) figures that take what seems to everyone but Yokoyama to be every conceivable form aside from regular human. There's a man with a coin-shaped head, one made of balls, one whose body looks like an umbrella, one with a pyramid head and a hairy cloak, one made of rocks, one whose body is a board with a human-shaped cutout, and all manner of head shapes, patterned bodies, and other wackiness. As with the landscape itself, these seem like designs clogging up Yokoyama's head which are begging to get out onto the page, and this rudimentary narrative, with its cast of hundreds, provides the opportunity to do so. 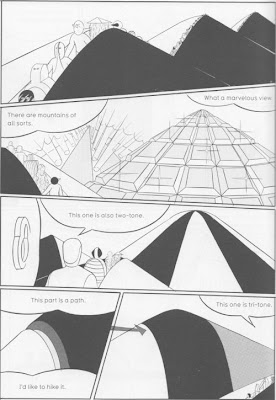 Whatever the reasons for the book's existence, the imagery that Yokoyama has managed to pull from the ether and finely explicate on the page is, for the most part, gorgeously bizarre. There's the occasional object or action that doesn't quite read like it is supposed to, but most everything makes sense, from the houses on wheels to the giant wave of photographs, and they provide plenty of opportunities for meticulously detailed scenes, even within the uniform line weights and expansive white space that Yokoyama favors. Scenes such as the one in which everyone falls down a steep, sandy slope: 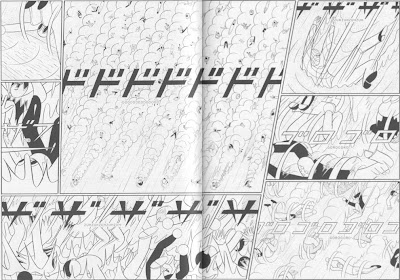 Are obsessively detailed, with rows of near-identical guys all tumbling in unison. But even more arresting are the occasional bits in which Yokoyama plays with appearances even more, such as when the group is surrounded by soap bubbles: 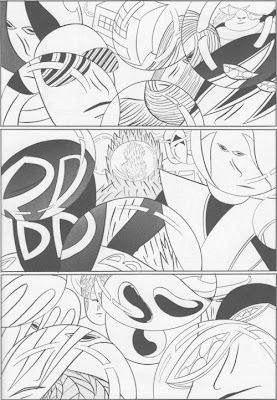 It's a strange combination of otherworldly and mundane, with the fascinating thing being that the otherworldliness comes from something most everyone has experienced, while the mundanity comes from the inexpressiveness of the impossible characters. Maybe this is Yokoyama's particular artistic genius: that he manages to flip our expectations in such a way that the weirdness seems normal and the normal seems weird.

Whatever the case, it's a strangely compelling read, with the reader turning pages eagerly to find out what will come next, even though they know it won't make much sense. It's an abstract sort of storytelling, even though the words and images are understandable, since Yokoyama manages to use them to create something inexplicable and beautiful. It's weird shit, but of the sort that accumulates in the brain and invites attempts at analysis, even when it's obvious that no explanation will ever come.
Posted by Unknown at 9:38 PM