Art What I Like (even if it makes me want to puke): Jim Woodring freaks me RIGHT THE FUCK OUT 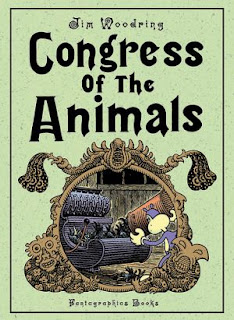 While I continue to be somewhat stymied in my attempts to interpret Jim Woodring's Frank comics (he claims that they, or at least his previous book, Weathercraft, are explicable, but I'm often kind of clueless, although his latest, Congress of the Animals, does seem to be about unfulfilling work, attempts to "find oneself", more unfulfillment among bad influences (possibly due to drugs and over-indulgent art), and eventual peace due to finding one's soulmate), I don't think I'll ever stop marveling at the amazing artwork he fills his books with. It contains some of the most solid and tangible representations of fantastical objects and events I've ever seen, along with a deeply unsettling atmosphere, something that either creeps me out or turns my stomach to look at it. There's something about the plantlike growths on animal creatures, the gaping orifices, and the plentiful eyeballs that, while obviously unnatural, goes a step further into a visceral gut-punch, somehow keying into a subconscious urge to look away.

This aspect of the work has been present in other Frank stories I've seen, but Woodring seems to crank it up to near-unbearable levels here, as Frank travels away from the comforts of home and into a strange land, encountering strange (even for him) creatures and weird landscapes. Probably most horrifying of all are some men who have no faces, but rather gaping holes in their heads with a spherical object rolling around inside, a sight which seems to sicken even Frank himself: 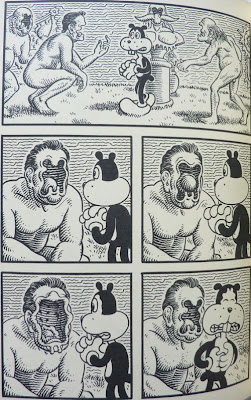 Later, Frank gets sent on a crazy hallucinatory trip, giving Woodring a chance to break out of his usual grid for some more creepiness: 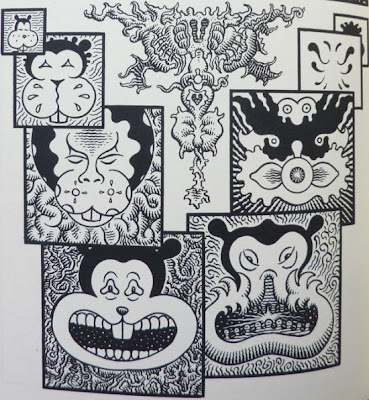 The final panel there seems especially awful to me; the distortion of Frank's mouth and lips is something that strikes me as terribly painful and nasty.

Later, Frank comes across a constantly-morphing beastie that tries to swallow him up into its conglomerated structure, and it's another unnerving Woodring creation that really grosses me out. What's especially impressive is the way he communicates its shape-shifting nature, never depicting it the same way twice, as if it is a roiling mass of mouths and eyeballs, tentacles and protrusions: 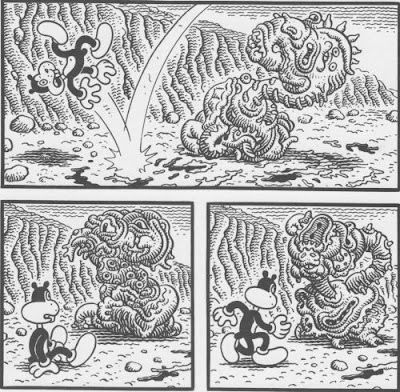 But no matter what the freakiness that Woodring delivers in these pages, they all fit right into the world, seeming like solid objects and beings interacting with one another. The signature wiggly-line shading gives everything a real volume and heft, and maybe that's why it's all so creepy. As obviously unnatural as everything is, it's all so well-drawn, it looks like it could leap right off the page. If that's not a frightening thought, I don't know what is.
Posted by Unknown at 10:32 PM