The latest collection of DMZ, Collective Punishment, is a good one, but that's not really anything surprising, at least from the standard the series has set for itself. The thing that I really dug about this particular volume was the art, all provided by guests rather than regular artist Riccardo Burchielli, and since this point in the long-running plot is seeing the merciless bombing of New York City by the US military, they all get to show off their own particular takes on the fiery destruction of the most famous city in the world. It's harrowing, arresting, gorgeous stuff (almost) all around, an awful, beautiful spectacle.

The one exception, unfortunately, is Cliff Chiang, who limits his large-scale destruction to a cityscape engulfed by orange clouds: 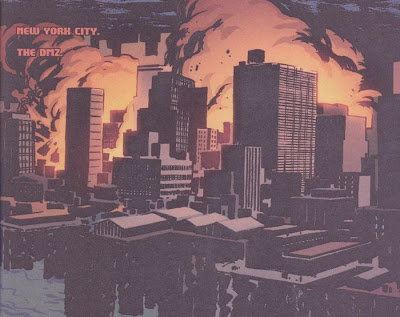 But everyone else takes the opportunity to dazzle with their destruction. Andrea Mutti eclipses Chiang's idea by rendering the skyline in silhouette and degrading the image to the point that the buildings look like burnt husks of themselves, making for a simple and horrifying image: 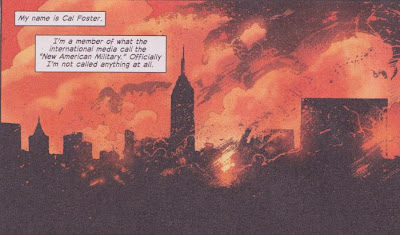 David Lapham does something similar in one image, making the whole city seem to be ablaze while death rains down out of the sky: 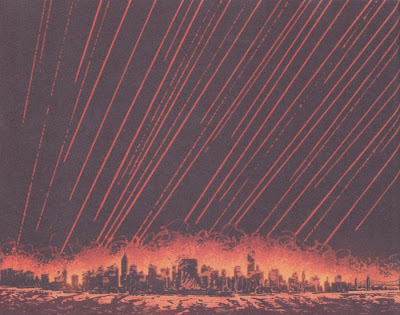 But he also includes a more visceral, apocalyptic image, including both the cause and effect of all the horrifying destruction in one breathtaking splash page: 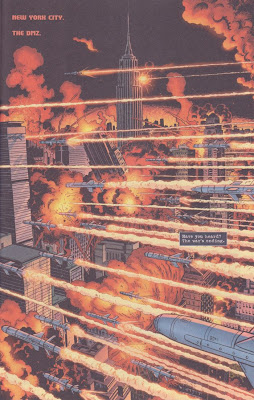 Danijel Zezelj provides a long view of the city, and his rough-yet-detailed style takes the aforementioned "burnt out husk" idea and turns it into a city-wide bonfire, with the skyscrapers seeming like the protruding bones of Manhattan turned to smoldering embers: 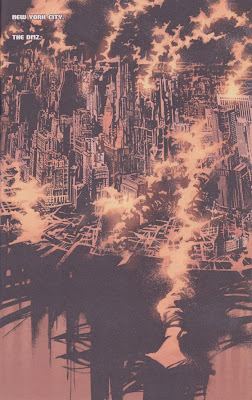 But for my money, nobody beats Nathan Fox, who turns a birds' eye view of the city into a horrifying inferno, death raining down from above like nonchalantly destructive hailstones: 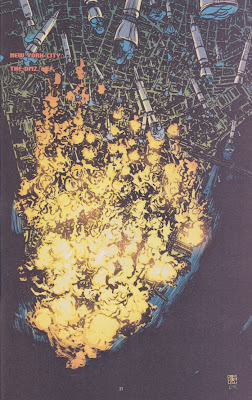 But he makes the rooftop view even more horrifying, an urban hellscape of flames and explosions: 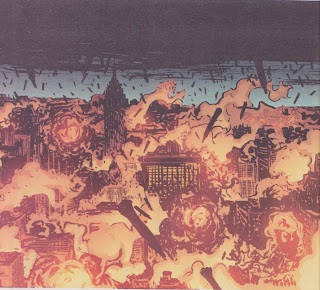 DMZ has often been a harrowing read, bringing the foreign idea of war home to Americans, but rarely has it been so dismally horrifying, so full of widespread death and destruction. These artists have really risen to their task; I doubt I'll ever forget the awful sights they've shown me.
Posted by Unknown at 7:00 PM