Uncle Scrooge and Donald Duck: Sometimes life can be too adventurous...

Uncle Scrooge and Donald Duck: The Son of the Sun
The Don Rosa Library, Volume 1
By Don Rosa
Published by Fantagraphics 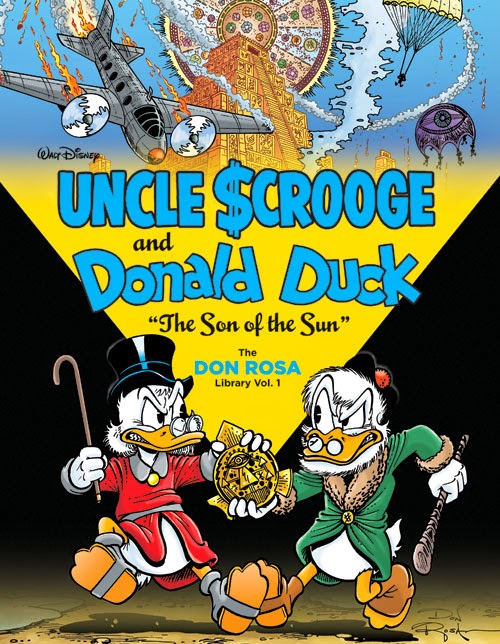 Donald Duck/Uncle Scrooge comics have long been some of my favorites, and next to the master of these characters, Carl Barks, Don Rosa has always been a close second as a creator whose work I loved, and one of the first cartoonists whose name I recognized. That means I'm very glad to read this collection of his earliest duck comics; however, reading these as an adult, while they're still very enjoyable, they don't quite meet the level of perfection that I thought they did when I was a kid. Having read a number of the classic Barks comics in recent years as Fantagraphics has been releasing them, I now notice just how fannish Rosa's work is, packing in as many references as possible to Barks' stories, dialogue style, flourishes of motion and emotion, incidental characters, and even background gags and bits of detail. It's a bit off-putting; Rosa's work is good enough to stand on its own, but he's so slavish to not just Barks' style, but even his actual stories. Characters regularly mention their previous adventures, flashbacks take place in and around various Barks stories, and some stories are even sequels or follow ups to some of the classics. Rosa would take this to an extreme a few years later with his The Life and Times of Scrooge McDuck, a biography of the character that is entirely based on things mentioned in Barks' comics, but even at the beginning, it's a crutch he leans on quite a bit.

To be fair, many of the reasons for this fannishness is explained in the volume's supplementary material, as Rosa describes how his entry into the world of professional cartooning basically arose from his work creating fanzines for the duck characters, and without any formal art training, he basically came to his particular style from copying Carl Barks. Given the chance to create official duck comics, it's only natural that he would try to build on the creations that his hero did so well, and he never claims to do anything but create stories that are reverent of what Barks did. He even explains his philosophy, stating that even though plenty of other creators have made duck comics, he only considers Barks' stories to be canonical, and he even insists that they all take place during the 50s, in order to keep the timeframes realistic (otherwise Scrooge would have to be upwards of 150 years old). It's an odd, interesting ruleset that he defined for himself, but hey, that's apparently what floats his boat, and even in these earlier, somewhat rougher comics, it's obvious that he has storytelling energy to spare, so why not spend some of it cramming in references and details that only die-hard Barks fans will get?

And while I'm pointing out the shortcomings of decades-old work that even its creator says he cringes to look at, I don't know if Rosa had an especially good grasp on Donald Duck's character in these early stories. He doesn't quite manage to capture the "everyman" essence of Donald that Barks imbued him with, and he often comes off as petty, violent, and prone to fits of anger (which actually makes him more in line with the portrayal of Donald in pretty the Disney cartoons where he was more likely to throw tantrums at Chip and Dale than hold down a job or have rivalries with his annoying cousin Gladstone). It's weird, and kind of strange, especially considering Rosa's devotion to Barks in every other aspect of his stories. 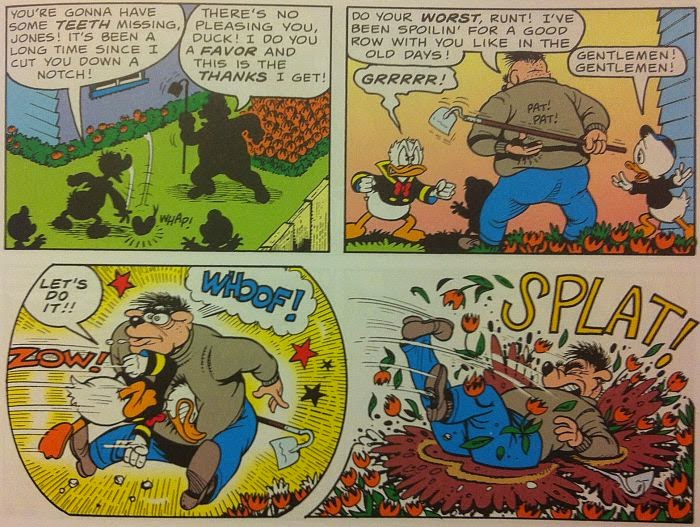 All complaints and nitpicks aside, Rosa's comics are still enormously fun to read, especially the action-filled adventures that he has Scrooge, Donald, and their nephews embark upon. He fills these tales with such vibrant detail and fun action that one can't help but be drawn along with a grin on their face. In fact, "The Son of the Sun", Rosa's very first duck adventure, may well be the highlight of the book, a classic story in the vein of Barks' globetrotting quests for treasure that even pairs the ducks up with their nemesis Flintheart Glomgold as they search for a treasure-filled Incan temple high in the Andes. There are plenty of fun gags and references along the way, but the real highlights come with the chosen venue, the snowy mountaintops being the perfect place for Rosa to include some of his signature motion-line gags in a scene with a runaway airplane: 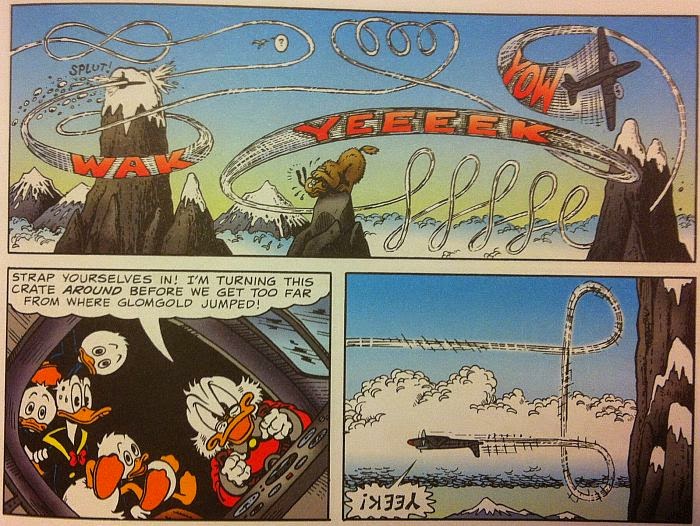 The climax of the story presents another opportunity for Rosa to dazzle, as, after the ducks find the treasure they are seeking in a temple atop a near-inaccessible peak, a plugged-up gas vent literally explodes the mountaintop and sends the temple flying: 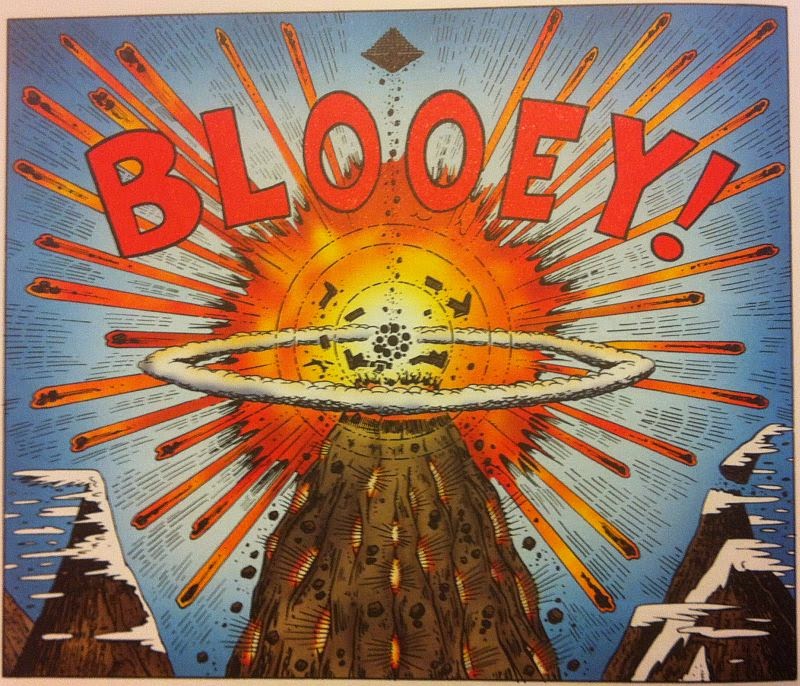 I love the sense of scale in that image, with the energy bursting out of the mountain, the snow being blown off of neighboring peaks, and the temple itself reduced to a tiny projectile sent soaring into the atmosphere with the ducks still "aboard". He follows this up with an image (and a tense scene) that conveys an excellent sense of vertigo, as the ducks realize that they have been sent sky-high, with nothing between them and the ground but thousands of feet of thin air:

This sort of crazy action is what Rosa does best, and this story is a great start to his career as the second-best duck artist (even if it was, as we learn in the book's backmatter, a repurposed story from a series that he drew for his college newspaper [although that series was meant as an homage to Barks, so it sort of makes sense for him to make the connection literal]). There are some other pretty good stories in this volume (including "Last Sled to Dawson", which expands on Barks' "Back to the Klondike") but the only other one that I think captures Rosa's particular specialty is "Cash Flow", in which Scrooge, Donald, and their nephews defend Scrooge's money bin against the Beagle Boys, who mount an effective assault through the use of a pair of rayguns that allow them to control inertia and friction. That's a fun concept, and it leads to a gloriously over-the-top climax that involves the complete destruction of the money bin, sending all of Scrooge's money (which acts like liquid, having been rendered frictionless) raging through Duckburg like an especially expensive flood:

Rosa also takes the chance to deliver another of his intricate tangles of motion-line action, as the ducks race through town in their inertia-free car to try to catch the money before it pours into the bay: 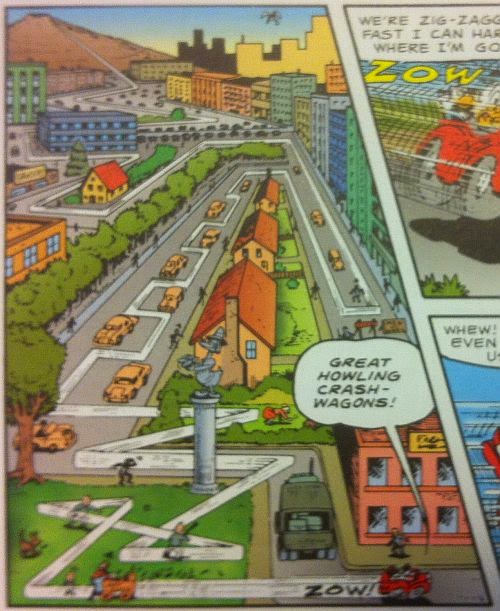 I love this sort of thing, and seeing it paired with Rosa's intense devotion to Barks only highlights it as a unique area in which he may have been better than his idol. I wish he had spent more time on this sort of zaniness and less on working in Barks' margins (which can also be fun, but I'll take originality over nostalgia any day). But I can't fault the guy for doing what made him happy, and I'm excited to read the coming collections of his comics and experience his continued growth as an artist and storyteller. Now I'll just have to wonder when William Van Horn will be getting his fancy hardcover library?
Posted by Unknown at 11:34 PM