CAKE 2015: I brought home many things

This past weekend was the fourth annual Chicago Alternative Comics Expo, or CAKE, and I'm happy to say that it seemed to be a successful event for everyone involved, from the organizers, to the attendees, to the many amazing artists who were exhibiting their work. I've volunteered for the event in previous years, but this year they asked me to get even more involved, so I was the Social Media Coordinator for the weekend, running the official CAKE Twitter, Facebook, and Tumblr accounts. I spent the weekend walking around, taking pictures on my phone, and doing lots of tweeting, retweeting, and sharing, so if you check out the past couple days of activity on those accounts, you'll have a pretty good picture of what I was up to.

But anyway, as I usually do when I attend these sorts of events, I want to share all the cool stuff I picked up. Check out this pile of comics goodness: 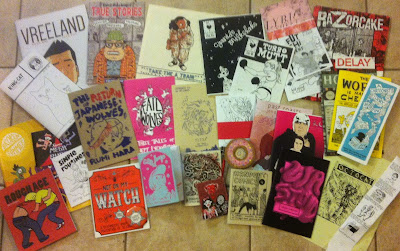 And here's an explanation of just what all that stuff is. Starting from the top "row":


Going across the middle:


That's a lot of comics to process! I'll be reading them over the next week or two, and since CAKE has gotten me inspired, I'll even try to write some blogs about them. But first, I'll do a post sharing the awesome Groo sketches that I got this year. Stay tuned!
Posted by Unknown at 6:00 PM