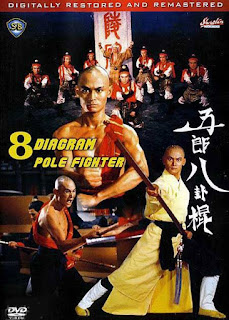 I had been wanting to see this movie for years, and now that I've had the chance, I'm happy to say that it's pretty awesome, if not in my personal martial arts movie canon. It stars Gordon Liu (The 36th Chamber of Shaolin, Dirty Ho), which is always a sign of quality, and it's full of really good action, often pitched at an operatic level in which the characters' strong emotions are demonstrated in the ferocity of their fighting.

The plot kicks off with a battle in which the Yang family, who are loyal to China's royal family, are betrayed by the evil Pan Mei, the queen's father. I'm sure these events have some historical significance, but to somebody who doesn't know their Chinese history, it's basically just political scheming for power. The battle is pretty great though, with the seven Yang brothers using their family's deadly spear technique to kill dozens of enemies before they ate overwhelmed by hordes of guys with spring-loaded weapons that wrap around their spears (and arms and legs), holding them immobile and rendering them helpless and easy to kill. It's a bloodbath, but most of the brothers go down fighting gloriously, and their father, who wields a cool bladed staff, only falls after being shot full of arrows, jumping to the top of a 15 foot tall family tombstone, screaming curses while covered in blood, and dying standing against the monument in a defiant stance:

Only two of the Yang brothers survive the battle (although I think at least one other brother was captured, but he's never seen again). One of them, the sixth brother, is driven mad after seeing his father and brothers betrayed and slaughtered, and he returns home to his mother and sisters, where he spends most of his time either in a near-catatonic state or attacking anyone who happens to be nearby, which forces the women of the family to fight him, including his mother, who wields an awesome dragon-headed staff that was gifted to the family by the emperor. He's played by Alexander Fu Sheng (The Avenging Eagle), who died in a car accident during the filming of the movie, so he kind of disappears at a certain point without playing what should have been a major part of the final battle.

Meanwhile the fifth Yang brother, played by Gordon Liu, seeks refuge in a monastery (after being helped out by a hunter played by director Lau Kar-Leung [Dirty Ho, Legendary Weapons of China]). This isn't exactly a philosophical movie like The 36th Chamber of Shaolin though, so even though the abbot (Philip Ko, Eastern Condors) initially refuses to allow him to become a monk because he's too caught up in seeking vengeance, he overcomes their objections through force of will, shaves his own head, and insists on staying. Having cut off the head of his spear to avoid being recognized as a member of the disgraced Yang family, he decides to learn the monks' method of pole fighting, although he objects to their use of non-lethal methods. They mostly practice on wooden wolf dummies, working out ways to defang the animals rather than kill them, but he demonstrates the superiority of his methods by just smashing the dummy. You would think they would just kick him out for his behavior, but he somehow manages to win them over, mostly because it's necessary for the plot. However, we do get one goofy fight in which Liu attacks a wolf dummy that the abbot manipulates like a puppet, and one pretty awesome fight in which the abbot tries to stop him from heading off to rescue his sister, who was kidnapped by Pan Mei. This scene is probably the highlight of the movie for me, with some amazing acrobatics and some great acting by Liu, who is so determined to save his sister and achieve vengeance for his family that he simply cannot be stopped:

It's also the source of the movie's title, which references the eight symbols of Taoist cosmology, with Liu managing to rearrange the furniture in the monastery mid-fight to create an arrangement of these symbols on the floor: 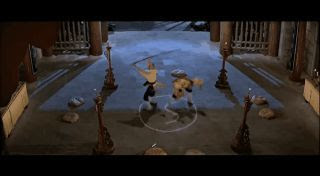 Having proved his point, I guess, he heads off for a pretty brutal final battle with Pan Mei and his men, a scene that sees him and his sister just destroying guys left and right, whether they're stabbing them with poles or carving them up with their father's bladed staff, or, in one memorable moment, when one guy gets impaled with a pole, then Liu hits the pole so hard it goes flying out his back and impales a second guy:

At one point, it looks like they might not be able to prevail against the large number of men, but the monks show up in the nick of time to turn the tide of battle, and even though they fight non-fatally, they use their wolf-defanging methods to do some pretty nasty stuff:

And then, of course, the good guys prevail and, in a somewhat distasteful manner that's still in keeping with the film's level of violence, murder the traitor while he's cowering in defeat.

Overall, it's definitely a good film, with some great fight scenes and a level of emotion that gives the battles real stakes, but the way the monks so easily capitulate to Liu's perversion of their way of life and the cartoonish level of violence in the final battle end up making this one less than fully successful. The film does seem like kind of an end of an era, a sendoff for the old-school kung fu stories of the 70s just as the industry was about to shift in favor of more modern, stunt-based films like Jackie Chan's Police Story (which came out in 1985). This is a pretty good way to go out though, and it's definitely worth watching.
Posted by Unknown at 9:54 PM